Denise Welch seems to have spent a lifetime ‘bouncing back’ from adversity but she’s in a good place these days. Kathryn Armstrong met up with her at home in Cheshire as she prepares for Calendar Girls in Newcastle this autumn.

It’s the morning after the night before. Something that once meant lurid tabloid exposés in the world of Denise Welch, but today the social media meltdown in her house is for someone else.

The frenzy surrounds the release of a new single by The 1975, the hugely successful band fronted by Denise’s son, Matt Healy.

It was given first play on Radio 1 the previous evening to great acclaim and Denise’s ‘proud mum moment’ involved posting a video of herself on social media dancing round the kitchen. Cheers mum. Some 66k views later…

So this is Denise the mum. In her words, “doing no more than all those working mums; spinning a million plates, juggling loads of balls and hoping you can catch the odd one.”

There are plenty of versions of Denise Welch, who turned 60 this year, and today the ‘homebody’ is playing vinyl in the kitchen of their Wilmslow home and making a bacon sandwich for 17-year-old Louis who just happens to have that day bagged a part in the latest series of Vera (he’s also recently finished a film called Sometimes, Always, Never with Bill Nighy).

Sounds like a starry house but nothing could be further from the truth. There may be awards on the tables, rock star magazine covers framed on the walls – and a who’s who of celebrity photos in the downstairs loo, but above all, it’s a place of safety for this tight-knit gang.

“There are big nights like last night”, says Denise. “At the end of the day Matt’s just my little boy and having a famous mum is something that he’s used to, but I think he crosses his fingers and hopes for the best when it’s something like this – but I just can’t resist joining in”, laughs Denise.

“Because so many of The 1975 fans follow me I feel I’ve got to give them something as well – so I play along with it, but I know what lines not to cross. I think that he’s glad that my drinking days are over.”

For sure. Once Denise’s headlines were there for all the wrong reasons. Some car-crash moments that were the result of a well-publicised battle with depression which led to self-medication with drink and drugs, and subsequently acres of column inches and lurid tabloid headlines.

Told by one weekly women’s magazine editor that, ‘her misery sells’, the likelihood is that even six years sober and living a relatively abstemious life with her also sober husband Lincoln Townley, she won’t shake off the past. As she says, what goes on Google stays on Google.

But she gives not a jot. Today Denise is in a good place, though her mental health struggles are never far away. These days she’s able to manage her condition, ‘endogenous depression’ and lay some perspective on the past.

It’s six years since Denise and Lincoln stopped drinking – they met one another in a nightclub at 6am (“I wouldn’t have been there if I wasn’t in such a dark place”), and went through the journey to sobriety together.

“I wrote a letter to my 16-year-old self for a mental health magazine and I said alcohol took me down a long, dark road and it’s very difficult to find your
way home.

“Meeting Lincoln who was on another dark road meant we managed to do it together but it’s not just us. It is the ripple effect it has on everybody who loves you.”

Readers will know of course that Denise was married to actor Tim Healy. Today they remain friends and near neighbours – and share the stage for the popular Sunday for Sammy fund-raiser on Tyneside.

She says their previous home was a ‘bit of a rock n’ roll house’, but says: “Matthew said, ‘you know mum, if you hadn’t been a bit rock n’ roll then I wouldn’t be who I am today’.

“I’ve ticked all the rock n’ roll boxes and I’m quite happy to have a cup of tea and a crumpet nowadays.”

An attitude which makes her perfect casting for a role in the musical Calendar Girls, which is of course the story of Rylstone WI’s bare-all calendar (of which more overleaf).

It’s a nationwide tour which will see Denise back on her favourite stage, Theatre Royal, Newcastle. She hopes her Geordie fan base will come and see the heart-warming show. Her dad still lives on Tyneside and she thinks of the place as home, visiting regularly.

Calendar Girls was a big decision for her, especially  after the row over her departure from a high profile   panto in Newcastle at Christmas. Denise says
she was fired rather than walking away from the show as its production company claimed.

“It all contributed to me being very poorly, it was a terrible time. People still think I walked out.” 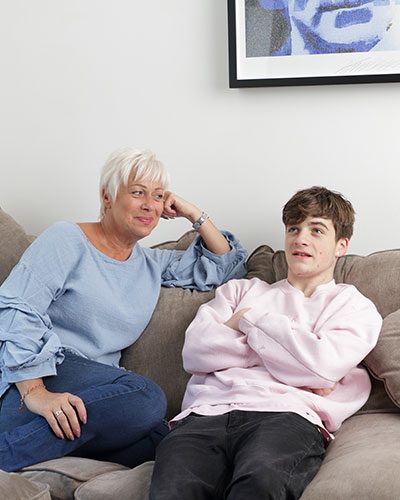 Denise is ever candid about her on-going illness. Her honesty about her mental health is one of the things people most relate to.

“Depression is the owner of me”, she says. “When the unwelcome visitor decides to visit I just have to be confident in the knowledge that he will leave again.”

She made the acclaimed short film Black Eyed Susan about mental illness, with Louis playing a character with depression.

“Ninety per cent of the time my life is wonderful but unfortunately that visitor will always make unwelcome calls. It’s not always related to events. When my mum died I was emotionally traumatised but I didn’t get clinical depression.

“When I was on the beach in Grenada in January with the waves lapping on the shore, my wonderful husband, palm trees and a golden beach, my depression came on and you have to wait for it to lift and to leave. I manage it and I have a wonderful support system in my family and I am much kinder to myself than I used to be.

“If I can remove anything from my diary that I can, then I will. I’m very much the show must go on and I will push myself to not let people down.

“Usually my episodes are short lived but I did have a breakdown after Christmas which was the first in ten years.”

She is a great advocate of self-care and admits to ‘sloth-days’.

“Although I have a very busy life and not one day is like another, I have days where I get up, I will lie on the sofa and I will watch real-life crime all day!

“I’ve taken the guilt out of it. I think it is self-preservation and I think it is also my mind telling me to recharge mentally as well as physically. I don’t have a problem taking lots of holidays because I know that for nine months I’m going to be on stage daily.”

August will also be when she releases a second novel, The Mother’s Bond which is set in Byker and Chester le Street and which, according to the actress who has voiced the audible version is, a “Catherine Cookson for the noughties”.

Denise admits she doesn’t find the writing process easy but loves to tell a story and write about what she knows.

“For my first biography, a publisher came to me – they knew it would be sex, drugs and rock n’ roll. It was a time of my life where they offered me a lot of money and I was fed up of the press telling my story. Little did I know at the time I was being hacked by Daily Mirror (for seven years).

“That first book was a big success, my life was out there. I did a second book called starting over but I felt I hadn’t started over.

“I’m really pleased with this latest book, I love writing about the North East.”

The book, Calendar Girls and even a return to Loose Women mark a life busier than ever for Denise at 60.

“If there’s anything that people ask me on a daily basis it is how have you done it? Stopped drinking, smoking, not put the weight back on. My motto is; if I can do it in my mid 50s then you can do it too.”

Life may be sober but it is by no means dull. There’s a box of newly delivered wine in the hallway, alcohol-free from The Dry Drinker. Partying doesn’t stop, it’s just different.

“If I did a book now it’d be pointing out the joys of sobriety without being the drink police. A lot of people think you won’t be funny again, go to a party again.

“I pick and choose where I go but if there’s a party I’ll go for a couple of hours and when the tide turns and everyone starts getting drunk I’ll slip out the back door and not one person will know or care. I get everybody at their best.”

Denise and Lincoln spend time in LA where the early nights and non-drinking culture suits them. Lincoln’s work as an artist is flourishing and Denise is excited to be returning to the stage. One real regret about her partying past is that she is remembered for antics off stage rather than on.

“Because my life has been ‘out there’ a lot of people forget that I am actually good at what I do as a job and that’s why I’m looking forward to doing Calendar Girls. Winning the MEN Theatre Award for Little Voice was one of my greatest achievements because it was a ‘grown up’ award. Sometimes I just want to go, ‘hello everybody, can I just remind you that this is what I do?’”

The Calendar Girls tour promises to be the icing on the cake for a great year in this Wilmslow household.

So we’ve found the version of Denise that she’s properly settled in to. The woman who at 60 is confident on stage, a respected charity advocate, LGBT champion – not to mention happy to pose in a bikini and leave the heavy makeup behind.

“I am not obsessed about being a size eight. I’m a 12 and happy. I will have two days a week on 600 calories and eat normally the rest of the time. I post bikini pictures because if one person says they were feeling down about themselves then saw a picture of me and felt better then I’m happy – I will be doing it until I’m 90!”

Requests to reuse content from Remember Media are now being processed through PLSclear. Please visit www.plsclear.com to complete your request.