Claudia Robinson sits down with celebrity chef extraordinaire Chris Baber for a chat about his mission to make cooking fun... 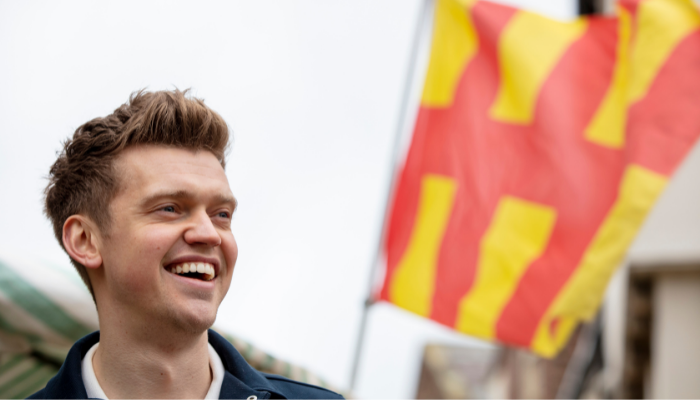 Chris Baber discovered his love for cooking at a very young age. The celebrity chef, who grew up in Hexham, is now on a mission to spread the word that anyone can cook, that it’s simple and fun, and has recently launched his first recipe book that reinforces that message. As his career continues to reach heady heights, he recently took time out to chat to Claudia Robinson about his inspirations, passions and hopes for the future…

Some of Chris’ earliest memories are standing on a chair in the kitchen, at home, and at his grandparents’, helping to chop up mushrooms. As soon as he was tall enough to reach the pots and pans by himself, he started cooking, and by the age of five he was helping his grandad make fry-ups at the weekend.

He reminisces: “I remember we’d have to open the door because it was like a steam room in their tiny kitchen. He’d always have the music blaring and I can still see him now, whistling and dancing while he made meals for us. It was inspirational to see him getting so much enjoyment out of the process of cooking. I didn’t realise it at the time, but he made me enjoy cooking – and like him, I always have the tunes playing when I’m in the kitchen.

“Even in my book, I suggest that the first thing you do is get your music on, because the more you enjoy being in the kitchen, the more you’re going to enjoy cooking. You switch off, it’s about escaping from life and the reward is your food.”

Chris recalls about coming home from school to watch Ready, Steady, Cook and cooking for his family. His parents had busy lives, his mum worked in the NHS for 40 years and his dad had a sales job, so Chris felt like he was helping by putting food on the table.

“I’d go to my friends’ houses for tea, we’d have fish, chips and beans, whilst at my house I’d make spag bol from scratch, and it made me realise that so few people cooked like that. It made me wonder why, and even back then I was already thinking about what I could do to get people cooking.

“It was a pipe dream for me to be a chef. I knew cooking was my passion and I wanted to inspire people to enjoy doing it too. When I was in my late teens, we all started getting mobile phones. I would text photos of my food to friends and it became a ‘thing’.”

Chris started modelling and enjoyed taking food he’d cooked along to shoots. One time, at a shoot at the Metro Centre, one of the other models suggested that Chris shared his food on social media. Organically his popularity grew and soon he had 10,000 followers on Instagram alone.

One day, Chris received a message from someone who worked on Yes Chef, asking him to take part in the TV competition. He did, and he won the 2016 series. One of the judges was Chris’ cooking idol, Atul Kocchar, who was clearly impressed that Chris chose to cook a variation of one of his fish dishes in the competition (without knowing Atul was going to be the judge).

“When Atul told me I’d absolutely nailed that dish, I remember getting goosebumps,” says Chris.

“That single moment was when I realised I should be working in food and it gave me a massive boost of self confidence. Atul offered me a job at his Michelin star restaurant in London. Honestly, it’s the stuff dreams are made of!”

Chris was 25 and still living in Hexham. He accepted Atul’s offer, found ‘a wreck of a place’ in south London to live in, and started working in the professional kitchen in Mayfair.

“I did six months in the restaurant and learnt a phenomenal amount, all the time thinking, how can I make this professional style of cooking easier so that people can do it at home? I realised I didn’t want to work in a professional kitchen, my passion was always to show people how to cook nice food, easily.

“Atul, who has become a great friend, gave me his full blessing and off I went to pursue my ambition to become a celebrity chef as I realised this was the only way I could reach a big audience.”

Chris is quick to point out that his ambition had never been to be famous, or to be on TV, but he knew that it was the only way to get in front of lots of people and help them learn how simple and fun it is to cook.

Chris started to try and build his profile, on social media, by seeking out opportunities to appear on TV, including Blue Peter, and building relationships with celebrities. He reached out to British Olympic gold medallist, Tom Daley, and they cooked together on Tom’s YouTube channel.

“He was someone I really admired,” says Chris. “A national treasure who was prepared to work with me – it gave me another massive boost. I went to an event for M&S and ended up meeting one of the marketing directors; that night really changed my life.”

Within a couple of months Chris had become a resident chef for M&S Food, which has seen him tour the UK meeting suppliers, creating weekly recipes and becoming the face of their Fresh Market Update TV adverts, a campaign which reaches millions of people across the country. Chris now has over 200,000 followers across his social media platforms, a far cry from his 10,000 followers a few years ago that enjoyed looking at his home-cooked foodie snaps!

“To become a resident chef for M&S blew my mind. It’s always been one of my favourite brands – the most exciting thing was telling my dad! I’ve got fond memories of going to the store in the Metro Centre with my Nana, so it’s such a treat to be aligned with an institution, and I love visiting producers all over the country. It’s an honour and has really helped me build momentum with everything else that I’m doing, encouraging people to cook at home.”

One of the things Chris is most proud of is his Chris Baber Cooking School which he launched during the first lockdown. Three nights a week he’d host cook-a-longs online from his home kitchen, encouraging parents to cook with their children.

“It’s one of the most heartwarming things I’ve done,” he reflects, “And it kept me going through lockdown too. It was great to get families cooking together and in a selfish way, it was good to have some structure to my week! We did another series after lockdown, the Baber Flavour Fakeaway, where I was joined by a guest celebrity and we’d cook together. It was a privilege to have people like Paddy McGuinness, Joel Dommett, Lisa Snowdon and Vick Hope involved in that!” 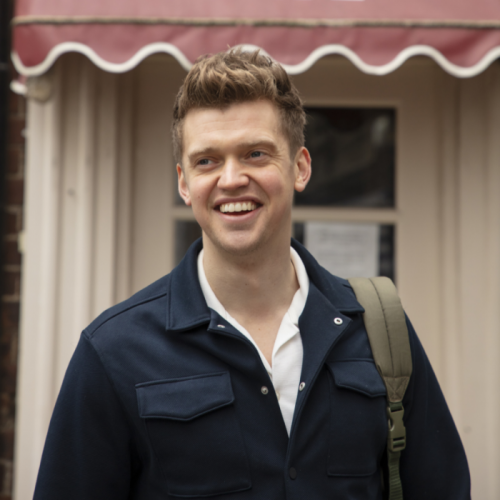 Chris is clearly going places and has very much achieved what he set out to do. The icing on the cake for him is the launch of his first book, published on 7 April this year.

He explains the ethos behind his book: “I set out with three main requirements. Everything in the book had to be accessible. If you can’t get hold of half the ingredients then you’re never going to bother making it. Also, it was important for me that the language in the book was clear. Not everyone knows, or cares, what saute or julienne means. And finally, you only need basic kitchen equipment – a chopping board, knife, pans, the sort of stuff everyone has. No stand mixers or fancy machines that generally gather dust in the cupboard!

“I want this book to be the one that people reach for time and time again. I hope it will be covered in sauce, with pen notes in the margins, and I want it to be the book that brings people together around the table and helps them build their confidence in the kitchen.”

In between launching his new book, Chris has recently bought his first flat in London, and is currently having his own, bespoke kitchen fitted where he’ll be able to do all his filming. His hectic schedule has meant he’s had less time than he would like to spend visiting his parents and friends back in Hexham, but he tells me that, when time allows, there’s nothing he loves more.

“I get to the point in London, as much as I love it, that I have to head back north, to the countryside. “When I get on the train, the second it pulls out of King’s Cross, I literally feel a massive sense of relief and calmness. Dad picks me up from Newcastle and we drive back to Hexham, we go for long walks along Hadrian’s Wall and Tynemouth beach. I love catching up with friends, exploring the Newcastle food scene which is evolving all the time.”

So, what does the future look like for Chris? “I want to become the go-to chef for making food accessible and hope to further grow my social media following.

“I’d also love to write a second book and, rather excitingly, I’m in talks with some TV companies in America at the moment, as well as some shows in the UK. One big goal of mine would be to win I’m a Celebrity, Get Me Out Of Here! or maybe even Strictly Come Dancing. Both of those would be amazing experiences and unrivalled platforms for me to further spread the word about how easy it is to get in the kitchen and cook.

“One of the key things for me with all this work is to make sure I’m enjoying life. After lockdown I got into the mindset of ‘work, work, work’ and have been hard on myself over the last couple of years. So I’m going to try more to go with the flow and enjoy it, whilst still working hard of course. It’s so important, I enjoy what I do but I need to take a step back and soak it all in!”