An Insider’s Guide To The Grey Owl, Newcastle

Matthew Thomas caught up with the owners of one of Newcastle's newest bar & restaurants, the Grey Owl. 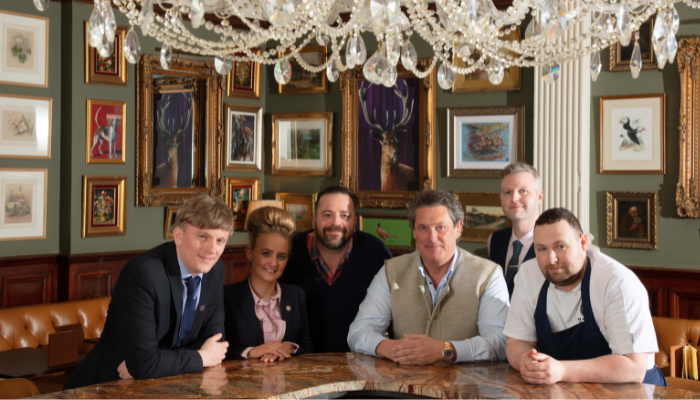 Newcastle’s principal thoroughfare, Grey Street, is welcoming a brand new, high end establishment to its ranks. Matthew Thomas caught up with Richard Nellis and Stevie Pattinson, two of the North’s leading hospitality proprietors, to find out more about their recent success with Hibou Blanc and what’s to come with their latest venture, Grey Owl.

As the rain trickles down the window and a smattering of ground coffee flitters into an espresso cup on a dreary Thursday morning in Newcastle, Richard Nellis is perched upon a quilted leather bar stool and glances out to The Beehive just across High Bridge’s cobbled street.

Flicking a pen through his fingers and adjusting the binder on his notepad, Richard discusses the requirements of a new job opening with Paddy Forbes and Amy-Jo Correia, general manager and restaurant manager of Hibou Blanc. They’re searching for an experienced maintenance operative to work between their existing brasserie and the new venue, Grey Owl.

Richard and his best friend, Stevie Pattinson, are the masterminds behind some of Newcastle’s most successful enterprises. Hugely-popular spots such as The Muddler, Barluga and Pleased To Meet You are just some of the dynamic duo’s successes from a career spanning more than 20 years.

“I’ve always been involved in fit-outs and hospitality,” explains Richard. “It was Stevie who approached me and said ‘why don’t we set our sights on something really unique and put our stamp on it?’.

“It’s nice that we’re best friends too – and even though it’s been a rocky road at times with COVID and so on – we still have exactly the same goals, passion and drive as the day we started.”

After opening a plethora of venues and side-quests, this collaborative pair are writing a new chapter together as they continue their radical transformation of the former Davidsons Jewellers into a new grand locale called Grey Owl.

The pair seem to have a blueprint when investing in possible hospitality sites, especially within Newcastle. Derelict, somewhat forgotten buildings steeped in historical significance with relatively intact Edwardian and Victorian architectural features appear to be their ‘thing’.

Take, for example, their renovation of Hibou Blanc; a stunning, Grade II Listed Edwardian site, designed in 1902 by nationally renowned architects, W.S.Owen. It’s a lavish spot that now serves up restaurant classics such as truffled steak tartare, roast quail breast and passionfruit posset. At the time of writing (early April), 94 Grey Street is buzzing with the sound of mechanical whirring as a flurry of tradespeople work around the clock to install a decadent three-floor, fine-dining café in time for the early May bank holiday.

How does one end up owning such a historic site on one of Europe’s most famous streets? Being in the right place at the right time, Richard says: “I was passing through the city one morning and saw the letting sign from the corner of my eye. My initial reaction was just ‘wow, how has that come up?’.

Everyone seemed to think that the jewellers were just undergoing refurbishment. We walked inside and were amazed. It’s not a single floor like so many believe it is – the interior is actually set across five levels with a mezzanine element. It adds so much character to the building.”

Richard and Stevie have secured new premises on one of Newcastle’s – and the region’s – greatest streets. It’s positioned 10 yards away from the Theatre Royal. But how will the Grey Owl stand out from its well-established neighbours?

“The menu will be incredibly unique,” Richard explains. “We’re not aiming to open another restaurant where we’ll be serving entrees, main courses and desserts. Grey Owl will be the place for people looking to enjoy unique, luxury items.

“People may say it’s overpriced, but I disagree. It’s about attracting people into the city. Those who want to enjoy high-end items in a truly special environment, without travelling to London or Manchester. Grey Owl is somewhere that showcases the city in style, giving clients a space to enjoy the nice things that are right on their doorstep. We like to think we are raising the bar in town.” And if the interior of Hibou Blanc is anything to go by, then Grey Owl will be finished to a scrupulous degree.

Totalling just shy of £1m to furnish, venture inside their flagship Hibou Blanc brasserie on the Bigg Market and you’ll be met by ornate parquet flooring as elegant beams open up the space for a commanding marble bar counter – the beating heart if you like – and the solid-crystal chandeliers shipped from Russia decadently glint as Richard escorts me out towards Grey Owl.

“The interior and finishes have been influenced by the likes of Rules in London, the Ritz-Carlton in New York and the central bar area is inspired by Geneva Airport’s Prunier seafood bar,” Richard says.

“All the woodwork, electric elements and fittings are handmade. I’m incredibly proud of the team I work alongside. They’re supremely skilled master craftsmen and they take great pride in revisiting Hibou Blanc to see their work being enjoyed by so many. It’ll be the same feeling when Grey Owl opens up.”

Reflecting on huge successes and looking to an exciting future, I ask, ‘what’s next?’. Richard smiles as my exclusive tour inside the construction site comes to an end.

For the time being, himself, Stevie and their staff are focussing on spreading their wings with Grey Owl, and it’s sure to be a gamechanger in the region.