There are many fascinating parts to Dame Irene Hays' life, which she recently shared with Claudia Robinson... 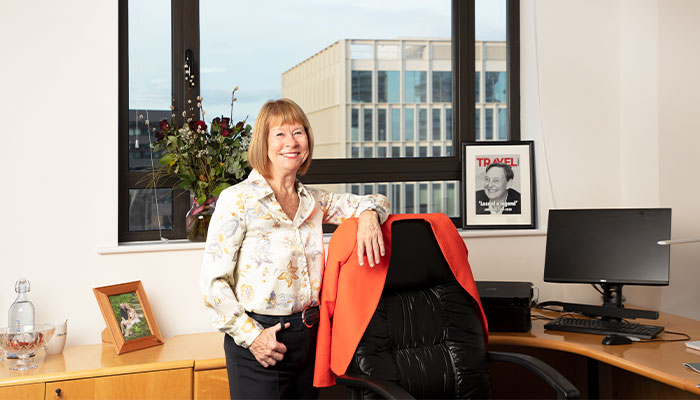 Dame Irene Hays DBE DL is owner of Hays Travel, the UK’s largest independent travel agent, ‘godmother’ to P&O’s biggest cruise ship and passionate about enabling young people to be the best they can be.

That passion saw her being appointed Dame Commander of the Order of the British Empire in November last year for services to training, education and young people.

Dame Irene is one of the travel industry’s most respected figures as Chair of Hays Travel, which has 455 high street shops across the UK.

Born in Ashington, to a mining family, she has also held many senior posts in local and national government, including chief executive of Sunderland City Council and South Tyneside Council.

In October 2019, Dame Irene and her late husband, John, were hailed as ‘heroes of the high street’ when they acquired Thomas Cook’s entire retail arm, saving more than 2,000 jobs in travel agencies across the UK. 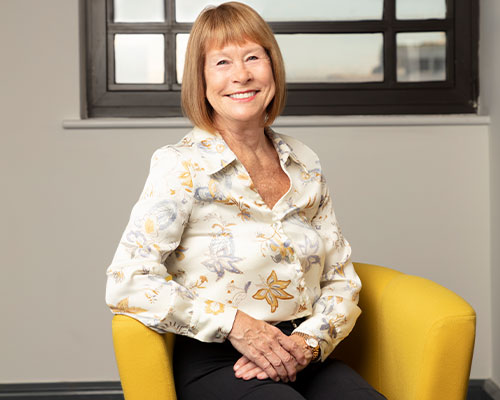 I can honestly say that Dame Irene is the most interesting, warm and enthusiastic person I’ve ever had the privilege of interviewing.

Throughout our conversation, time and time again, we came back to her passion for helping young people. It’s been a common theme in everything that Dame Irene has done and is so important to her, and her late husband, John, that they set up the Hays Travel Foundation.

So far the foundation has donated just under £1 million to help young people achieve and be the best they can be in their health, sports, the arts, and education.

“We do everything from training ballerinas to working with people in deprived areas,” Dame Irene tells me.

“It’s joyous. The Hays Travel Foundation meetings are the best meetings! Everyone gets so emotional. When you think of a young person, who’s come from a relatively humble area, who has the opportunity to go to ballet school – she sent us a video to say thank you. It’s very special. The foundation was so important to John so a big drive for me now is to carry forward his legacy. Young people have been a huge part of my career,” Dame Irene continues.

“Even in the old days of YTS, I was a huge fan and now with apprenticeships. When I was at school, it was obvious to me then that some people were academic and would go on to be successful and for some, school just didn’t suit them.

“The reason John and I got on so well was because of a shared passion for enabling young people, through apprenticeships in particular. And really, that’s been a thread throughout all of my career. So whichever role I was in, I would always try to make sure that young people were a key part of that.”

Dame Irene believes much of Hays Travel’s success is down to their approach of picking up talented, young people at the start of their careers, giving them a clear pathway and nurturing them to succeed. This is evident from some impressive statistics.

“Before we acquired Thomas Cook on 8 October 2019, 43% of our senior managers had started their careers with us as apprentices. When John died, I asked Jonathan Woodall-Johnston, our now COO, if he would step up to help me run the business – he started his career here as an apprentice, 18 years ago.”

Dame Irene is still very much hands-on in the business and customer care is at the heart of everything they do. When the pandemic first hit and holidays across the world were cancelled, she and John joined the rest of the staff to ensure confused and disappointed customers got all the support they needed.

“We’d only had the additional shops and staff for a few months. At the end of February, following the outbreak of Covid at the Costa Adeje Palace in Tenerife and some of the cruise liners, the travel industry just fell off the edge of a cliff. So, in March we were cancelling and amending holidays but not booking any new ones. We were working seven days a week to help our customers.

“When furlough was introduced, we tried to use it but it meant our staff couldn’t look after our customers so we were the first agent to bring staff off furlough. Booking holidays is an emotional transaction and we needed to be there for our customers.”

It’s clear how important it is to Dame Irene to look after her customers, but equally important is the welfare and morale of her staff.

“We’re not a hierarchical company. Whoever is in front of the client is the most important person in the organisation. That’s our culture so it’s crucial that we look after them. We take our managers away on conferences – after the first lockdown, we took all the new Thomas Cook managers away with the existing managers so they could get to know each other. We chartered four aircraft and flew them to Turkey. John and I served the drinks on the planes!”

The manager trips are also a great opportunity for Hays to celebrate their community partnerships, community being another key part of Dame Irene’s life and career.

“We encourage all our shop teams to get involved in their local communities, from raising money for local hospices by sitting in a bath tub of baked beans to jumping out of planes, or working with the local football team. Businesses on the high street should be more than the sign above the front door. They have the power to contribute to that place, and to give it a sense of place. It’s about being part of the community and there is almost a duty for businesses to do that.”

Our conversation moves to the tragic loss of Dame Irene’s husband, John, who died on 13 November 2020 after collapsing at their head office in Sunderland.

“Work has been very good for me,” she reflects.

“The fact that we had no choice but to roll up our sleeves and make sure our customers were looked after, I had to get on with it. I’ve also got lots of wonderful family and friends who have been very good to me too. And I do a lot of things. I read a lot, I like live music and try to keep busy and positive. But there is just a huge gap.”

Dame Irene explains that when John died she was overwhelmed with the outpouring of love and support.

“I think it’s partly because it was so soon after we’d acquired Thomas Cook and the feedback from that acquisition was unbelievable. We did it for commercial reasons, obviously, as we are business people at the end of the day but we had no idea we’d receive a public response like that! It was bizarre, all the publicity. Going on Good Morning Britain and talking to the lovely Ben Shepherd.

“So when the news broke about John, there was an outpouring of a different sort. He was much loved in the industry. ‘Loss of a legend’ was the headline on the cover of Travel Weekly. We received donations from many of our suppliers for the foundation and asked people to donate or send in just five pounds rather than sending flowers. We got loads of fivers in the post – you can only enjoy one bouquet at a time, it made so much more sense for people to donate to a cause John was so passionate about. We received a quarter of a million messages, via email, cards and flowers!”

It will come as no surprise that something else Dame Irene loves to do is travel and this spring she’s heading off on the adventure of a lifetime, and on a solo holiday for the first time.

“I’m spending a week in the Caribbean islands first and then going on a cruise around the Amazon. I have mixed emotions about the trip, I’m excited after reading all the guide books, I know what I want to see. But there’s also a sense of trepidation as I’ve never been on holiday without other people before.

“I’ve been to some amazing places in the world, I’m very lucky. It’s a privilege to be a part of the travel industry and I must pay tribute to all of the staff at Hays who are nothing short of exceptional. They’ve worked so hard through all of this. And now we’re seeing the most amazing bounceback in the industry and a huge spike in bookings as people are keen to travel abroad once more. There are exciting times ahead.”