Review: The Lion, The Witch and The Wardrobe

Charlotte Smith settles in for a night at Sunderland Empire...

Open the closet doors and prepare to be whisked away to an enchanted world at this spectacular performance of The Lion, The Witch and The Wardrobe.

Peter, Susan, Edmund and Lucy expected that their evacuation to the countryside would be an eye-opening experience, but they had no idea what was in store.

Quite literally, as Lucy accidentally stumbles across a wardrobe, which transports her to a magical kingdom called Narnia. Or what was once a magical kingdom, before the wicked White Witch doomed the world to an eternal winter – without Christmas!

Determined to save their brother and Narnia, the remaining siblings unite with a bunch of courageous creatures and a legendary Lion to destroy the witch once and for all.

Samantha Womack has taken her talents to the cobbled streets of EastEnders, the thrills of The Girl on the Train, and now to the enchanted world of Narnia.

Co-stars Ammar Duffus, Robyn Sinclair, Shaka Kalokoh and Karise Yansen all convincingly convey the beloved characters, successfully showing the amazement that would behold any wartime child who was thrown into this adventure.

A special mention must go to Sam Buttery and Christina Tedders as the beloved Beaver couple, and Jez Unwin as our favourite faun Mr Tummus.

The creatures of the classic children tale have transformed from figments of imagination created by CS Lewis’ words, to CGI-enhanced figures on our screens, to now being brought to life by the incredibly talented Elliot and Harper Production team.

Aslan the Lion has never appeared so majestic as when the cast manoeuvres the mighty puppet across the stage. It’s no wonder the original Aslan puppet will be proudly displayed in The Lowry foyer until next year. 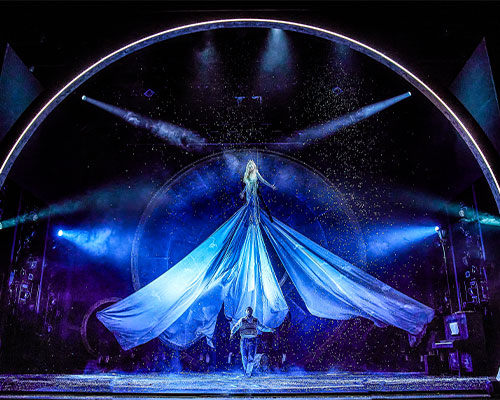 Of course, we are on Team Aslam, and the outstanding but incredibly creepy costumes which create the White Witch’s army only confirm this. You will be thankful the life-like masks are up on stage, away from you sat safely in the audience.

A less scary but equally as successful set is the mini suitcases transformed into train carriages. Rather than simply switching to the next scene, the performance embraces the contemporary approach to theatre and recreates the moment with intuitive props and staging.

Sally Cookson’s set and costume design definitely deserves a round of applause.

As an adaptation of the fantasy novel, the performance of course follows a favourite childhood story. However, adults will find the show equally as entertaining, appreciating the wonderful wardrobe and phenomenal puppeteering.