Review: 9 to 5 The Musical, Sunderland Empire

A hilarious musical that will have you forgetting your 9 to 5 and have you thinking what a way to make an evening. Charlotte Smith checks in at Sunderland Empire...

Adapted from the much-loved movie, the musical follows the story of how three co-workers unite against their sexist boss – by kidnapping him.

Violet, Judy and Doralee’s own experiences dealing with the infuriating actions of the man in charge fuels their reckless decision, leading to the formation of this tremendous trio.

In a kidnapping that can only be described as comical, it’s impossible not to laugh with – and sometimes at – the characters.

A spectacular show which is unapologetically raunchy, belly-achingly hysterical and empowering all in one.

The cast must have had a cup of that ambition Dolly Parton so famously sings about.

Performing the choreography and numbers with what seems like ease, it’s clear the dedicated efforts that were put into rehearsing this show.

Sarah-Marie Maxwell pulls of a beyond impressive performance, convincingly conveying her character of Violet as someone with strong will and worthy of a higher position in the office.

Only in this context could it be a compliment to say that someone comes across as an egotist so excellently. Sean Needham accomplishes portraying Franklin Hart’s unlikeable character so well to the point he is – almost – likeable.

A special mention goes to Julia Nagle as Roz for her incredible performance of Heart to Hart, which sends simultaneous laughter erupting through the auditorium.

With such an infectious enthusiasm from the cast, you’ll find yourself smiling without even realising.

Despite the concerns that this was an outdated choice to bring back to the theatres, the comedic musical has been a smash-hit – from the seamlessly smooth scene changes to the shining use of lights.

Even the costumes were expertly thought through, as Juliet changes from a skirt suit to a pantsuit at the end. A real “middle finger” to the sexist time period.

Somehow the musical manages to pull off conveying an important topic of the inequality between men and women, whilst at the same time not taking itself too seriously and providing an evening of entertainment.

And of course, the music. It was undoubtedly the highlight of the show. With such a selection of catchy, lively numbers and performed with such dynamic energy from the cast, it was hard not to sing along.

Sexual innuendos, side-splitting comedy, and an undertone of politics – the show has it all. 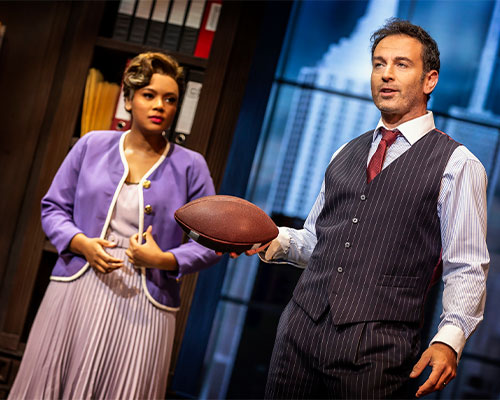 With folk like us on the job from 9 to 5, it’s time for a well-deserved trip to the theatre. This hilarious musical is perfect for a girl’s night. After an evening of ecstatic laughter, your sense of women’s pride will be soaring.