Getting To Know The Yorkshire Shepherdess

Amanda Owen found fame as the Yorkshire Shepherdess after we were invited to be flies on the wall, watching as she and her family went about life on the farm. Claudia Robinson finds out more about Amanda and her plans for a UK tour this autumn...

Due to covid restrictions at the time, her busy schedule, and the small matter of having nine children and a menagerie of animals to look after, I interviewed Amanda over the phone. As much as I would have loved the opportunity to visit Ravenseat Farm!

This was certainly one of the more chaotic interviews I’ve done, but also one of the most enjoyable. When Amanda answered the phone, the family were in the middle of a wildlife crisis.

One of the children had found a tiny owlet, which had fallen out of its nest, so Amanda was feeding it glucose and chicken at the beginning of our call.

“This is a perfect example of what every day is like,” Amanda tells me.

“The vet’s coming today, the children want to go swimming in the river, interviews and now a baby owl to look after!” She pauses for a moment, then shouts across to one of the children asking them to free a sheep that she’s noticed has its head stuck in a fence.

“Let me go and find somewhere where there isn’t anyone else,” she says, telling me a few seconds later that she’s found a secluded bench to sit on, cup of tea in hand.

“It’s definitely hectic, I have lots of tabs open in my head! This morning I needed to move the horses so I went out early, jumped on a horse with my skirt on and set off with just its head collar, riding up the road. I noticed some sheep in a meadow that shouldn’t have been there, so then had to go and find and fix the gap. Every pleasurable event ends up being another job, but I wouldn’t have it any other way.”

After featuring in the ITV series, The Dales, Amanda began documenting the intriguing story of her farming life and has since published four books. She and her family are also the focus of the popular Channel 5 series, Our Yorkshire Farm, which is one of the station’s most popular shows with over three million people tuning in to watch every week.

Amanda will shortly embark on a tour of the UK, to host a frank, funny and informative show where she’ll share heart-warming tales, honest anecdotes and funny stories from her farming and family life in North Yorkshire.

The tour includes dates in Newcastle, Middlesbrough and Scarborough and Amanda says she’s excited to be heading back to the region: “I love the area, it’s always a lively night out. I’ve been to Durham and Middlesbrough before and it will be great to visit other parts of the region too. It’s certainly easier to strike up a conversation with the audience when you feel at home.”

During her show Amanda will also reflect on how she got to where she is now, after being inspired by James Herriot’s books to leave her modelling life behind her. A part of her story that I was keen to find out more about. 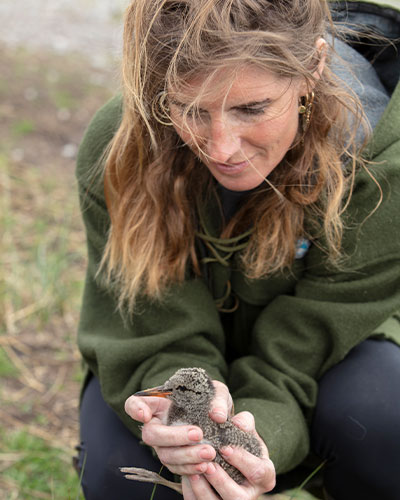 “My mother was a model, very tall, very slim and I was the same,” she tells me.

“It was always a thing that I’d probably do the same. I remember the Huddersfield Examiner had a classified section and in there was a ‘models wanted’ ad where they offered to put your portfolio together. I had visions of one minute shooting in a lock-up on an industrial estate and the next being in Vogue or Cosmo, but of course it doesn’t work like that. It just wasn’t for me.

“I loved All Creatures Great and Small. It was gentle, it was about characters, people and was set where I grew up. I also read a book at the time called Hill Shepherd by John and Eliza Forder and it inspired me. It opened my eyes to the fact that life like that still existed and I was excited that being a shepherd was even still a career option. I had to learn more. But it’s not like the majority of other careers where there are courses, apprenticeships or degrees. I had to find my own inroad.

“I practically hoovered up as much knowledge as I could, reading and learning as much as I could. But I needed practical, hands on experience. I have an innate ability to bluff and blag and managed to secure a job, milking cows and then drystone walling. It was a foothold.”

It was shortly after this that Amanda first met her husband, Clive. Also a farmer, she knocked on his door one evening asking to borrow a tup (male sheep). Clive is quoted as saying “This six-foot something woman knocked on my door. I was very taken with her; you couldn’t not be.” 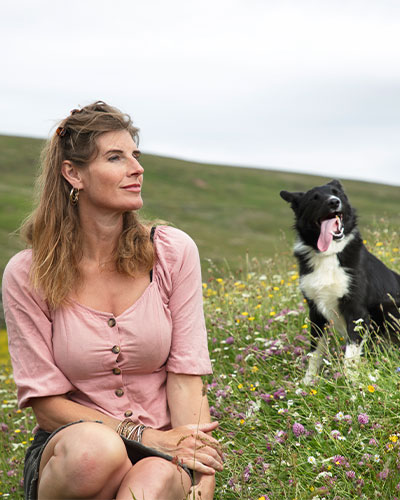 The traditional image of a shepherdess is a Bo Peep one with bonnet, dress, and crook. Amanda certainly ticks the ‘dress box’, as she’s known for her glamourous look, “it’s nice to wear nail varnish while I do the farming” she says.

“And we should all be allowed to be ourselves and not fit in to a stereotype. It’s funny though because people still want me to dress the whole part, asking me if I could ‘bring my crook’ when I go to shoots!”

“I’ve always encouraged my children to be themselves and I 100% live by that. There are nine of them, after all, with different characters, each one of them so unique. I tell them to do their own thing and try their best to get through life trying to appreciate the good stuff and what makes you.”

Reflecting on where Amanda is now, she says she never imagined any of this would happen.

“There’s a certain amount of getting on in life by being able to talk the talk and walk the walk. Communication is key. All that we’ve enjoyed at Ravenseat stems from an empire of making cups of tea and talking to people, asking questions. From that research came a book deal, then television. I feel guilty sometimes when people ask me how I managed to get what I have. I didn’t chase it, it came to me. Truth is stranger than fiction.”

I wonder if Amanda has a theory about why so many people tune in to Our Yorkshire Farm.

“There’s so much going on in the world at the moment, I think there’s been a genuine desire to go back to basics, to appreciate what’s on your doorstep. It appeals to so many people. We can communicate with people within seconds on the other side of the world, we can find out how to rehydrate a baby tawny owl. It’s there at our fingertips. That’s great, but also, after Covid and the 18 months we’ve all had, it’s awakened people’s life goals and maybe made them look closer to home.

“We’ve got Zoom and technology fatigue. I haven’t banished tech here, in fact there is nobody that has championed it more than me because we wouldn’t have been able to achieve all the things we have without it. But it isn’t the be all and end all. And during lockdown, education was important for my children, but they were able to learn so much from living where we do and I felt very lucky during that time that we live where we do and appreciated how hard it must have been living with three children in a city flat. As long as the kids have smiles on their faces I’m not bothered.”

Having spent so much time at home, like everyone else, you’d understand if Amanda felt a little apprehensive about the prospect of going on a nationwide tour to talk to thousands of fans, but of course, she’s very much looking forward to it.

“I enjoy having two different lives. Out here in a bubble on the farm and then heading off on a book tour wearing a pair of stilettos even though I’m six foot two!

“I’ve been in front of audiences at literature festivals and once did a talk to 50 hill farmers from Skipton. This will of course be different but I’m looking forward to talking to people, and meeting people. Once my audience was an older generation with a sense of nostalgia but now it’s a younger audience, because not surprisingly there are lots of people out there who want to quit the rat race. These people are intrigued. Everyone thinks they know me, and I almost feel like I know them too. It still blows my mind that I’m in all those living rooms!

“What I love most is that I can go from the arse end of a cow to showering, putting on something slinky, filming or doing a tour, and then going back to the farm again. Hopefully it makes people realise that we’re all pretty much in the same boat. Winging it!”