Getting To Know The Brains Behind Bowe Organics

Diane Bowe never set out to launch a beauty product range, but four years since Bowe Organics was born, the brand has already won four industry awards. She tells Claudia Robinson how creating a product for her own use led to something much bigger...

Diane runs a hairdressing business from her home in Darlington, which also doubles up as a laboratory where she creates her Bowe Organics beauty products. Her love for all things natural came while working at an organic hair salon in London.

“We’d have reps coming into the salon telling us all their products were organic, but they were owned by massive companies whose ethos wasn’t in line with ours at all,” says Diane.

“They’d claim the products were all natural and for the consumer rather than the brand, but I remember one time looking at the ingredients and my manager pointing out three harsh preservatives that he knew there were alternatives for. This sparked an interest for me, so I went away to research it.

“I wanted to get back to the source of what is actually good for my skin. At the time I had very dry skin so started analysing the products I was already using, and making my own using alternative, natural ingredients. It was around the time argan oil was becoming increasingly popular. I discovered that you could use argan oil at 100% but a lot of brands only used 1-2%.”

Diane started using her own home-made products on her hair and face and after a few weeks lots of her clients were noticing her eyelashes were longer.

“People would also stop me in the supermarket to comment on them, most people thought they were false eyelashes as this was in 2016 when eyelash extensions were becoming a big trend. When I told them it was the eyelash oil I’d made for myself, they asked me to bottle it so they could buy it.

“It was never like, okay, I’m going to sit down and launch a product company,” continues Diane.

“It really did begin as something I wanted to create for myself. I had mild anxiety about what was in the products I was using, I wanted it as clean as possible, so I had to create my own.”

Not one to do anything by halves, Diane took an EU legislation course and a formulators course, researched her legal limits, how to get her products insured and registered her company with the Vegan Society. Two years later, she officially launched her Lash Oil and so began Bowe Organics.

The same weekend Diane launched Bowe Organics, she found out she was pregnant. By then, Diane had started to work on her second product, a lip balm. Now that she knew there would soon be the pitter patter of tiny feet, she wanted to create products that she could use on her baby too.

“I thought if I made a lip balm it could double up as a bum balm as the products are very similar. I perfected the product over the winter months, or so I thought! It was smooth and melted just enough when it was on my fingers. But it got to the summer and the warmer temperatures meant it went runny in the pot, so I had to work on it again. I then waited until the colder weather to make sure it wouldn’t be too hard.”

If Diane had the luxury of a state-of-the-art laboratory, she could have perfected the product more quickly, but that’s the beauty of her cottage-industry business. So much thought, dedication and hard work goes into the creation of each of her products. When Diane’s little girl, Ivy, was born in 2018, Diane was diagnosed with epilepsy after suffering a series of seizures. 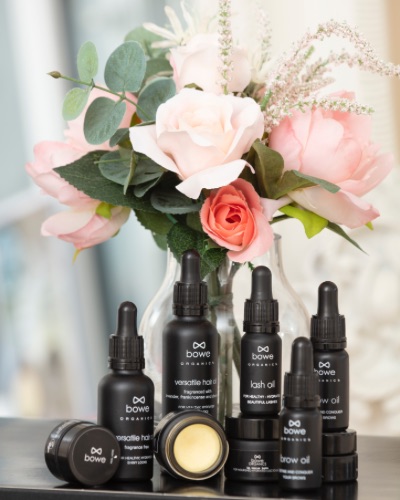 “I was housebound for a long time and became increasingly anxious, worrying about something happening to me or to Ivy. A friend of mine who studies reiki, who helped me so much during this time, suggested I looked into essential oils that would help ground me and relax me.”

In true Diane-style, she embarked on lots of research and created her own special blend of essential oils to help her at this difficult time.

“A mix of frankincense for grounding, camomile for calming and lavender for relaxing worked brilliantly for me. I mixed them in a jar with a carrier oil and whenever I felt overwhelmed, I’d rub a little of the mixture in my hands and inhale and exhale deeply, three times.”

Diane thought this perfect concoction of essential oils would work well in a hair oil, as she wanted other people to enjoy the benefit.

“I’m not saying it’s a cure for anxiety but breathing in this product can help bring you back to the present moment. And that’s what it’s about – making you feel better in that tiny moment. Doing that more regularly really can help.”

The most recent product to join the Bowe Organics stable is the Get Glowing Face Mask, a gentle cleansing mask containing Siberian ginseng, chamomile flowers, kaolin clay and Moroccan lava clay along with a host of health-boosting minerals, all combined to get the skin glowing. The story behind bringing this product to market perfectly demonstrates Diane’s attention to detail and passion for sustainability.

“It’s very important to me that no-one suffers for my profit,” says Diane.

“The face mask kit comes with two muslin clothes which took a long time for me to source, because it had to be right. There are camps in China where women are forced to make muslin cotton, so it was crucial for me to find somewhere that produced organic cotton, made ethically and with a fair trade behind it so the farmers weren’t being exploited. I found a company that ticked all the boxes, but I had to save up for a long time as their minimum order was 3000. I’ve got box loads in the garage but it’s worth it to know that the products I’m selling are ethical. Some people say I go above and beyond, but to me that’s just natural.

“I also try to have a short supply chain so most of my ingredients are sourced from a company that works directly with farms. They don’t put pressure on the farms to force children to skip school to work, in fact they give them extra money to go to school.”

The backstory to the face mask doesn’t end there. Diane wanted the kit to include a mixing bowl as the mask comes in powder form which needs to be activated with water.

Initially Diane experimented with coconut shells, but they didn’t have the right look or feel for her luxury brand. She established contact with a lady who works with women in Turkey who make beautiful, brightly-coloured bowls by hand.

Diane is safe in the knowledge there’s been no slave-labour involved in making these gorgeous little dishes and that the money goes directly to the women who make them.

Also, Diane’s intention is that the jar the face mask arrives in is a jar for life. You can then buy a refill, which comes in a biodegradable sachet which has a label made out of seed paper so you can bury it in the garden and flowers will grow.

The face mask is the only product in the Bowe Organics range that hasn’t yet won an award, but it has only just been launched. Most recently, Diane’s Lip Rescue Balm won Gold at the Free From Skincare Awards.

Since Ivy was born, Diane has made all the products she uses on her daughter’s precious skin, including a chicken pox cream which apparently worked wonders to stop her itching.

Diane’s next plan is to launch Baby Bowe, so it looks like what started out as one woman wanting to formulate natural products for herself and her family, is something we’ll all be able to benefit from for many years to come.