The plot? Your guess is as good as mine. Despite seeing the film and now a live theatre performance, my mind is still brilliantly baffled by the plot of The Rocky Horror Show.

However, if I was to sum it up in my own words, it would go a little something like this… The Rocky Horror show follows the story of Brad and Janet, two newly engaged, very innocent young adults who meet Dr Frank’n’Furter by chance when their car breaks down outside his house.

What happens next is a little more out there, but let’s call it an adventure they’ll never forget, with fun, frolics, frocks and frivolity, bursting with timeless songs and flamboyant outfits.

Packed with satire jokes and hilarious gags – usually of the innuendo type – goes down a treat between the narrator played by Philip Franks and the crowd with plenty of audience participation opportunities going down, breaking the fourth wall. 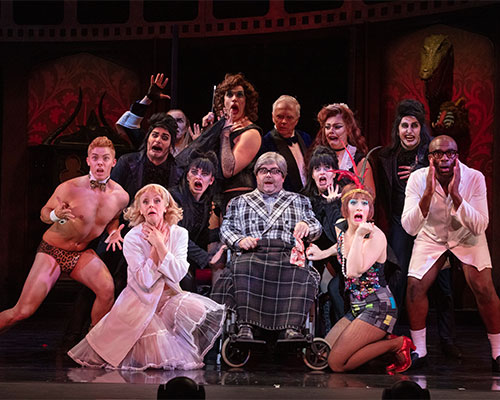 I have one word for the cast and that’s wow. What an incredibly captivating performance by all.

With tons of jaw-dropping moments and oodles of laughs each and every member of the cast has me hanging on every word.

The iconic Dr Frank’n’Furter is played by the incredible Stephen Webb who has starred in a variety of roles in both theatre and TV & film. From start to finish, vocals to dancing, stage presence and outstanding acting, the legendary role was portrayed effortlessly.

The brilliant Ore Oduba played the role of Brad and he certainly did not disappoint. The broadcaster and actor who has been entertaining audiences ever since winning the 14th series of Strictly Come Dancing took to the stage comfortably and effortlessly, entertaining the crowd with his outstanding performance. 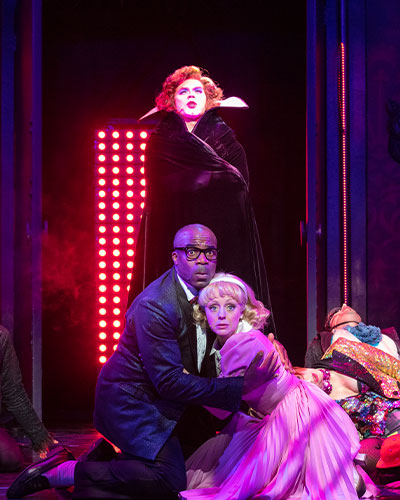 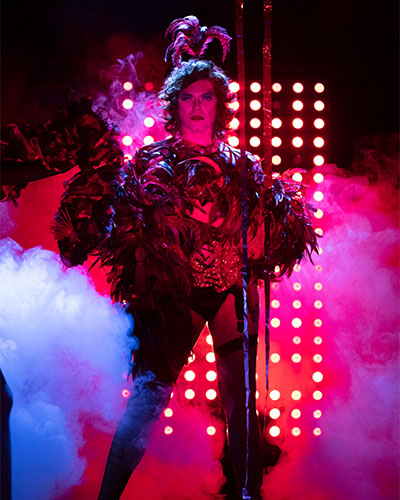 Haley Flaherty plays the role of timid, shy and girly-girl Janet perfectly. Her majestic stage presence brings a whole new dimension to the show – with plenty of impressive vocals and funny moments thrown in for good measure.

The lovely Suzie McAdam makes for the perfect Magenta – fierce, sassy and oh-so talented and Lauren Ingram is the perfect Columbia bringing to the stage an array of impressive musical numbers.

The legendary role of Riff Raff is played by Kristian Lavercombe which goes down a treat with the audience – all of which whom are impressed with his take on the iconic character.

Joe Allen doubles up as Eddie and Dr Scott, while Ben Westhead stars as the famous Rocky. Reece Budin, Darcy Finden, Jordan Fox and Rachel Grundy all take the stage as Phantoms.

A special mention goes to Philip Franks who takes on the role of the Narrator with incredible wit. Right from the start he maintained an excellent command over the audience, embracing the good-natured banter being flung his way.

What’s good about it?

For me and for much of the audience, the musical numbers are a significant highlight of the show.

The opening vocals of Science Fiction Double Feature belted out by Suzie McAdam who doubles up as the Usherette has the audience hooked.

Shortly followed by the cheesy Damn It, Janet which is performed superbly by the ever-so talented Haley Flaherty and Ore Oduba.

Then comes the biggest crowd-pleaser of all, yes, of course, we’re talking about The Timewarp. The audience and cast members alike wrapped up in the buzzy atmosphere, copying the famous choreography and singing along as if seeing their favourite artist in concert.

The musical arrangements by Richard Hartley are outstanding throughout. Sweet Transvestite was another big hit with the audience with a special mention going to Stephen Webb, who has the power to make the hair on your arms stand up with his powerful vocals.

Music aside, the set design by Hugh Durrant is phenomenal and perfectly aligned with everything you’d expect from The Rocky Horror Show.

The impressive costume design – perfectly replicating the glamour and style that’s expected with The Rocky Horror Show, along with dazzling choreography and complementing lighting all under the direction of Christopher Luscombe makes for the perfect show.

The audience, very much along for the ride, enjoy every minute of it, much of who are in attendance dressing up as their favourite characters, participated throughout.

It’s without a doubt a show like no other.

Who should see it?

If you’re a fan of the film, then you will love it. If you haven’t seen it, don’t worry, you’re in for a treat. If musical numbers, top-notch acting and brilliant staging is your thing, then The Rocky Horror show is a must-see.

Ready to thrill you with fun and naughty moments, The Rocky Horror Show is the boldest bash of them all. But be warned, this show has parts you wouldn’t want to watch with your parents.

When is it on?

It’s on now at Sunderland Empire until Saturday 25 September 2021.