Staycation In The Set Of Your Favourite TV Show

Now that restrictions across the UK are beginning to ease, why not look to book a staycation in the set of your favourite TV show?

The months indoors has meant one thing for most people living in the UK – you’ve probably binged on a colossal amount of tv.

Whether it is the coastlines of your favourite period dramas, or the bright lights of the busy cities, we have all dived into tv shows with the hope that they will give us something else to focus on other than house plants and beer gardens.

But as well as the comedy and drama, we have also got hooked on the locations where these shows are filmed and yes, you can visit them. Take a look at where to find these breathtaking places, and why you should visit them this year.

Bridgerton was released on Christmas day 2020 VIA Netflix, and quickly became the streaming service’s biggest show to date, reaching 82 million households in its first 28 days.

Although filming took place over many locations across the UK, one of the main sites was Bath, partly due to the fact that the Georgian stone and grand buildings can easily still be mistaken for Regency London.

From the cobbled streets of Abbey Green, to The Holburne Museum which played host to Lady Danbury’s mansion, Bath was used extensively to make up almost all the city locations throughout filming in 2019, making Bridgerton the perfect show to watch for some travel inspiration.

A must-visit location for fans is No. Royal Crescent, which is The Featherington family home in the series, and even before the show aired, a beautiful tourist hot spot. 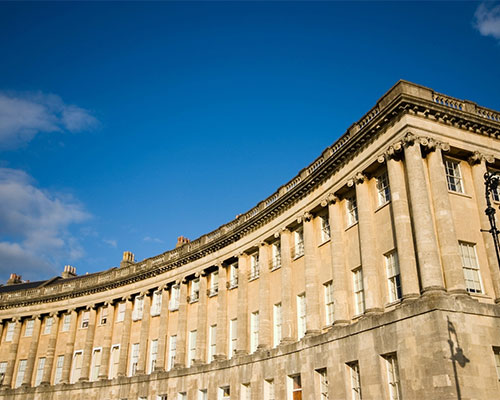 Although this gentle comedy starring its writer Mackenzie Crook is set in Essex, it’s actually, through the magic of tv, shot in Suffolk – though there’s not that much magic involved, as its beautiful green flat lands can easily be mistaken for one another.

Predominately filmed in the market town of Framlingham, it follows the lives of two metal detectors on the hunt for, well, metal.

Suffolk is often overlooked in favour of Norfolk when it comes to filming locations, but Detectorists expertly shows off the lush greens and the slower, calmer living of small-town life.

Framlingham, best known for being the home of Ed Sheeran, is full of landmarks from the show, with the local pub (in the show it’s called Two Brewers, and in real life the Castle Inn) to the scout hut which hosts their metal detecting club which is actually St Michael’s Rooms.

Next door to this is Framlingham’s most famous attraction Norman Castle, where Mary Tudor was proclaimed Queen of England in 1553. 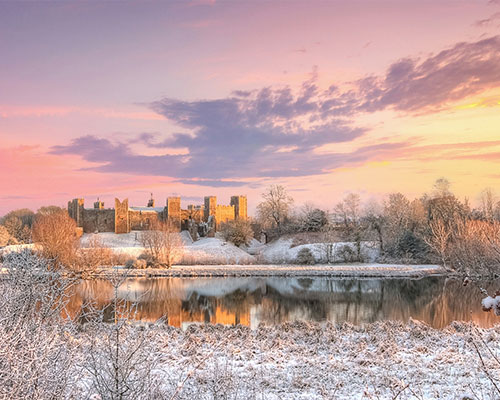 You might be confused as to why we’re not suggesting visiting the town of Broadchurch for this one, and we have two reasons. First of all, it’s not actually filmed in Broadchurch, and secondly, there is no Broadchurch (maybe we should have led with that).

Broadchurch takes its name from a combination of Broadoak and Whitchurch Canonicorum, which are both villages of West Dorset, and are easily accessible when visiting.

Primarily filmed in the Jurassic Coast harbour village of West Bay, Dorset, the show constantly showed off the impressive backdrop of the windswept cliffs overlooking the sea.

Throughout the three seasons, the show also let the spotlight fall on other local towns such as Bridport and Weymouth, letting viewers know that these seaside towns of holidaying past still have a huge amount of beauty to them. 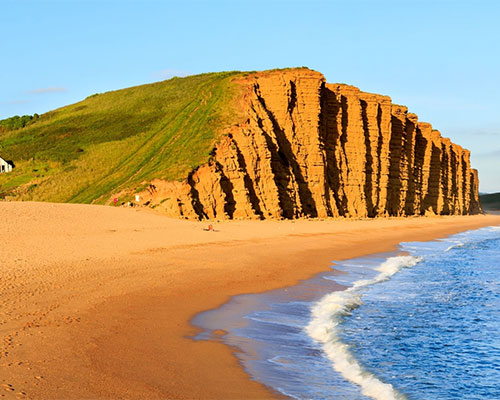 Starring Aidan Turner, Poldark is a historical drama series from the BBC based on the novels by Winston Graham and tells the story of the lead character returning to Cornwall after the American War on Independence in 1783.

With Cornwall being one of the most visited places outside London, it’s easy to see why the location films so well, with its beautifully wild and windswept coastal county looking stunning throughout the shows run.

Holywell Bay and Porthcurno beach are easily accessible, and during the summer allow for some stunning walks along the coast.

You can also visit the weathered Bodmin moor for a daytime hike, or head over to the Botallack Mine on the Penwith peninsula, where the show filmed the exterior of Poldark’s Wheal Leisure mine.

Some tv shows can use the magic of green screen, and millions of pounds, to create locations that are out of reach for the director. Even with all the money and technology, there is always a sneaking suspicion from the viewer that it could all be fake.

But with Gavin and Stacey, you just knew that the scenes in Barry Island were in Barry Island. The BBC comedy made constant reference to the location in South Wales, and fans still flock to the area to visit some of the shows most famous locations (many of the scenes set in England were also shot in Barry).

Many sites are still about today, from the Café Stacey worked at (which is a real-life café on the seafront), to the beach in front of the western shelter at Boofy’s. The region of Barry has beautiful sights, from the beach coastal line of Whitmore Bay, to the natural – and perfect for walks – Bendricks Beach.

The massively popular BBC show about midwives in the 1960s is mostly recorded in studios around the Surrey area.

The scenes that need a bit of 60s character are usefully shot on location in Kent, where London is skilfully recreated at Chatham Historic Dockyard. It’s a beautiful area, full of history and stories of sea life, doesn’t really give off the vibe of Call the Midwife.

If you’re looking for a bit more adventure in your staycation, we would suggest Outer Hebrides. What’s that got to do with Call the Midwife? Well, the Christmas edition of the BBC show saw the midwives leave London and Nonnatus House for the Hebridean islands.

Miriam Margolyes, who plays Mother Mildred, described it as “the most beautiful place I’ve ever been”, and it’s easy to see why these remote set of isles and lands gains so many fans.

The episode saw the cast visit famous locations on both Harris and Lewis, including the Callanish Stones circle, as well as remote locations such as Eilean Glas lighthouse on Scalpay. So, if you are looking for an adventure-based off the tv, head up north.