I’m spending a busy Wednesday morning at the home office drinking my fair share of tea before tuning into what turned out to be one of the most interesting conversations I’ve had.

Reading up on Chris’s bio before the call, I knew he was going to be quite the character, but boy was I in for a treat.

After the usual Zoom call introductions and interruptions from dogs – the joys of working from home – we dive straight into the all-important details of how he became a LEGO Master Educator.

Growing up in the small mining village of Hetton-le-Hole, obtaining his PGCE qualification at Newcastle University to now working at the Royal Grammar School in Newcastle, Chris has kept his roots firmly in the North East.

After graduating from university and working in the family restaurant, he quickly realised that he was yearning for something different.

“I decided that I didn’t want to spend the rest of my life working on a Friday and Saturday evening,” explains Chris.

“My partner at the time was currently doing a teaching course and I thought, ‘hold on, that would be good holidays and I’d get my weekends off!’ So, If I’m being honest, my initial decision was off the back of a pretty lazy idea, but as soon as I started my course at Newcastle University, I knew it was exactly what I was supposed to be doing,” he adds.

After a couple of years teaching at Churchill Community College in Wallsend, Chris was approached by North Tyneside Council to become a school improvement advisor for new technologies before being presented with his most exciting venture to date.

“I was at a point in my career where things were getting a bit stale, I didn’t know how to progress and I didn’t really know what I wanted to do; then the position at RGS came up and when I realised it was to create a brand-new department within a prestigious school, I was honoured to be offered such an exciting opportunity.

“I absolutely love working at RGS. The setting is just wonderful, as soon as you walk through the gates on a morning you can’t help but smile.

“I’ve been on both sides of the education landscape. I initially worked in a state school and supported a local authority; I’ve worked in primary schools, middle schools and high schools. I’m extremely lucky to now be working at RGS, having the opportunity to mould these young people into excellent computer scientists.

“The work we do in the department is to develop the pupils as lifelong learners and help them cultivate their creativity.”

Working as the Head of Digital Technology and Computer Science certainly comes with its rewards; and in Chris’s case, being recognised for outstanding work by LEGO is definitely an achievement that tops the list.

“A couple of years ago I won a LEGO teacher award for some of the projects I was working on with pupils, namely a theme park using moving components.

“LEGO took me out to Boston in the US to attend an international symposium at Tufts University. People from around the world who use LEGO in education were invited to the two days of seminars and professional development – it was great.

“As part of our outreach programme at RGS, prior to COVID, we were running programmes from the department because we became a LEGO Education Innovation Studio. We partnered with the Reece Foundation to develop STEAM (science, technology, engineering, art and mathematics) projects across the region and then out of the blue I got an email from LEGO to say we’d like you to become a Master Educator for 2020.

“I thought, ‘Wow okay, well what is that?’ I soon found out that it is global recognition that your approach to education is pretty cool.

“In essence, what I’m doing with that is working within their online community and keeping in touch with other like-minded educators and offering advice and guidance around LEGO. Their overriding pedagogy is learning through play and that’s something we really want to promote within the department.”

If being a LEGO award-winning teacher wasn’t cool enough, Chris has an array of impressive designs to showcase his talent as well as the work of his equally enthusiastic pupils.

“We have a ton of LEGO models we’ve worked on, but my personal favourite has to be the DeLorean – the car from Back To The Future with Doc Brown and Marty McFly. It’s the best film ever, in my opinion, so to be able to build it with LEGO was just amazing. The kids build awesome things all of the time,” Chris smiles.

“It’s a wonderful thing to be a part of, and they really enjoy it.”

Chris believes that learning through play is the way forward. A teaching method he’s always used and one that appears to work ever so well in and out of the classroom.

“If we are able to get the kids to learn without realising that they’re learning then you’re onto a winner – and that’s why the pedagogy of learning through play works so well.

“Certain pupils learn better through concrete modelling, so you can stand and explain how this piece of code will make the motor turn faster and you can give demonstrations, but the best way to do it is to just get your hands in and have a play around with the materials.

“It’s a theory I’ve believed in for a while and it just so happens that the guys at LEGO subscribe to the same trail of thought.

“Because of the philosophy at RGS, we include a lot of game-based learning in our curriculum, so the pupils have built arcade machines and our year 12s are currently building a stripped-back version of the Gameboy. 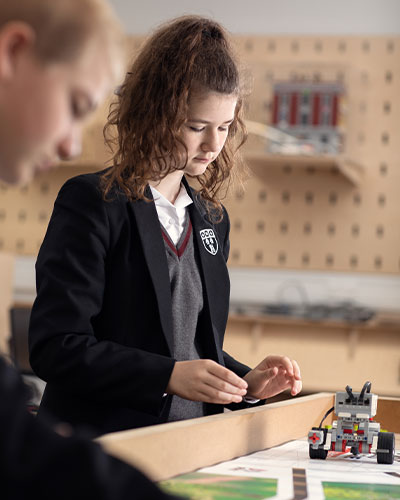 “We also develop pupils’ logical reasoning skills. For example, at the start of every lesson, the kids come in and do a puzzle – this could be sudoku or a kakuro – all of these different Japanese puzzles help to develop a strong foundation in logical reasoning. We also enter into a variety of robotics competitions – it’s very busy, but our ever-growing department is great.”

The creativity doesn’t stop there. Putting his teaching methods to good use, Chris actually hand-crafted the classroom he teaches in.

“I spent around nine months prototyping furniture and gauging pupils’ reactions. Once I was happy with the designs, in the last week of term, 80 sheets of plywood showed up and I spent the whole summer holidays working with the CNC machine, sanding them down and glueing them together. The result? Something truly bespoke. We still use our own skills whenever we require something new for the classroom.

“Using computer code, we put the design files on the CNC machine and it drew all of the furniture out; and because we weren’t purchasing items from suppliers, the carbon footprint on the room is barely existent – it’s super environmentally-friendly.

“It also inspires what we do in the classroom. We run a module with the year 9s where the room is the inspiration and we talk to them about computer numerically controlled systems. We get the kids to build a CNC drawing machine out of LEGO so they’re able to input how to do a letter and it writes for them using a pen, so we take the drill out of the CNC machine, put a pen in and the kids are able to control that with the skills they’ve learnt. Everything flows into everything else we do – it works brilliantly.”

2020 was quite the rollercoaster. We witnessed the coronavirus pandemic draw a halt to many things – teaching face-to-face being one of them. Adapting to a new way of life was the case for many, but yes, you guessed it, Chris Wilde was ahead of us all.

“Prior to lockdown, we’ve always done things paperless in our department. We never had exercise books, we used a system called Microsoft One Note which meant that the kids were used to doing their lessons on a computer. The main thing we found difficult at first was proceeding with group work. Because the kids weren’t in school during the first national lockdown, we had to come up with innovative ways to do that. We had to change the projects slightly, so instead of controlling a robot in the classroom, we got them to control a robot turtle on the screen. Using the video chat feature within Microsoft Teams, the pupils were able to group up and work on the project together.

“We had to flip from physical projects to virtual projects. The learning experience remained the same. We much prefer having the kids in the classroom, but we’ve actually found we can still deliver the curriculum we set out to and the only difference we really have is that we haven’t got to pick LEGO up off of the floor!”

Doing good and sharing his extensive knowledge is at the top of Chris’s agenda. The headmaster at RGS has dedicated one morning per week to allow Chris and his department to develop the knowledge and skills of computer science in primary schools around the region.

“I’m in a privileged position to be where I am currently,” says Chris.

“The RGS is renowned for being the best in the region and we don’t want to be insular about that, so since the department has developed, we do a lot of outreach. Every week we video link to a local primary school to deliver computer science workshops. If a member of staff isn’t particularly confident in delivering computer science then they can do one of our digital workshops and we can deliver that content.”

Well after the final school bell rings and Chris packs up and heads for the gates, his dedication to helping people certainly doesn’t come to a halt. Teaming up with his partner at Foundation Futures, they work together on a fantastic project called Make Stuff – a group of creative makers, programmers, scientists and engineers who have set up a space to meet, work, socialise, share ideas and collaborate.

It really is all go for Chris, but when you love your job as much as this teacher does, you never do a day’s work in your life.