ON THE HOOF WITH DEBORAH SMITH

It’s officially Christmas shopping season now and I always think we equestrians do pretty well when it comes to finding luxe items for our wishlists...

You can’t beat the fun (and crowds) of December shopping at Olympia and the Liverpool International Horse Show, but for a more relaxing approach, I’m heading online and also to some of the fabulous, North East regional Christmas fayres and shopping evenings.

I’m planning a seasonal shopping day out at Houghton Country Store, Heddon-on-the- Wall, before heading over to the Tynedale Gift Fair at Matfen Hall.

Having test-driven the Stubbern Equisoft Girth, which is every bit as good as I’d hoped, I have a second one on my Christmas list so the boys have one each. And then for something very ‘luxe’… I’m in love with the Hermes Smallbox in recycled cardboard – with handles in canvas and bridle leather. This has the iconic ‘Hermes Sellier’ print and is way too smart to keep in the tack room!

One thing I am banned from having on my Christmas list this year, is a new horse or foal! But if I was allowed a sneaky purchase, and if he was for sale, I would definitely be tempted by the lovely Erik (Merikanto).

I mentioned Erik briefly last time after he had been awarded Elite Foal at the Richmond Futurity grading. 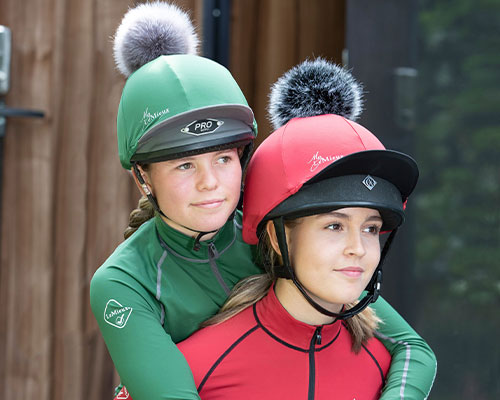 I asked his breeder and owner, Sally Banks-L’Amie how she got into breeding her first super foal: “I’m a 35-year-old doctor who worked as a radiologist, but now I run my own business, Belle Visage, where I am Clinical Director. After working long hours in the NHS, this change of career has given me the leisure time I wanted, to pursue my passion of horses.

“I have been riding since I was four, got my first pony when I was eight, and progressed through British Riding Clubs to British Dressage and also BSJA with my various ponies and horses.

“When numerous riding-related injuries stopped me competing, I had a highly- talented dressage mare and a retired show jumper, along with four Shetlands and my Scottie dogs, Hamish and Bruce.

“My mum and I decided to put the dressage mare in foal. I’ve always taken a keen interest in the breeding of dressage horses, following the bloodlines of my favourite stallions. With help from Lorna Wilson at Elite Stallions, we decided that Morricone would be a good combination with my mare’s Sandro Hit and Nimmerdor ancestry, and she was put in foal in June 2018.

“In September 2018, I saw a broodmare advertised with fantastic breeding. We realised that our knowledge of breeding was limited and, as my mare is registered Oldenburg, we contacted the society for any info they could give and found them to be an excellent source.

“My mum attended their Winter Meeting at the Oldenburg Verband HQ in Vechta, Germany last December, where she learned a lot of very important and useful information and met some fantastic people from all over the world with the same passion as us.

“With the information she brought back with her, we had got the bug! In April we bought a fabulous three-year-old Westfalen mare with most of the top German bloodlines in her ancestry. In June, we found a very elegant Dutch mare, sharing the same breeding as Dream Boy, who had just competed at the World Equestrian Games and will be on the Dutch Olympic team for Tokyo 2020.

“On 5 June, our beautiful Merikanto (Erik) was born. The period running up to the birth was as scary as it was exciting; researching the birthing of foals, getting the stable ready, buying predictor kits, putting CCTV in the barn etc.

“We were both there for the birth and helped bring the little chap into the world. We thought he was something rather special with the most fantastic temperament, he is so laid back and loving.

“Little did we know that six weeks later he would be awarded Elite Foal at the British Futurity at Richmond Equestrian Centre on 30 July, with a vet score of 9.5 and an overall score of 9.1 for his conformation and movements.

“This is a new venture for us, and all of the foals will be available for sale. We are looking forward to what we hope will be an amazing 2020.”