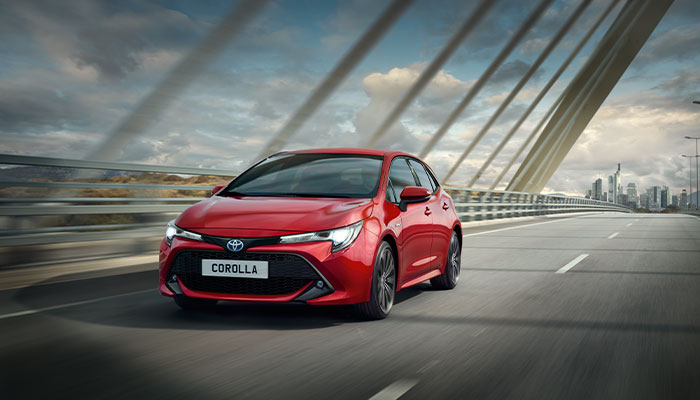 Toyota have managed to sell over 45 million cars since the car was launched back in 1966. This is amazing especially when you consider the Corolla hasn’t been sold in the UK for the last 10 years.

The Auris was introduced to replace the Corolla, but lacklustre sales meant the Corolla made its way back with a vengeance. This is no mean feat, especially when you consider the car’s rivals; Golf, Astra and the Ford Focus are all tough competitors.

Two areas where the Corolla beats its European rivals is with its class-leading 100,000 mile and five-year warranty – plus the cars are loaded with specifications.

All cars have LED headlights, autonomous driving and radar cruise control as standard. The car is available in four trims, the entry level is Ikon, Ikon Tech, Design and the range is topped by Excel. Range-topping cars get very sporty 18” alloys and a different colour roof, giving the car a sleek and extremely sporty look.

The first thing you can’t help but notice is the car’s styling. The front of the car, with its super slim LED lights, look really mean and aggressive. The rear reminded me of an Alfa – which is no bad thing. The car is available in hatchback, saloon or estate, so there is a car for everyone. 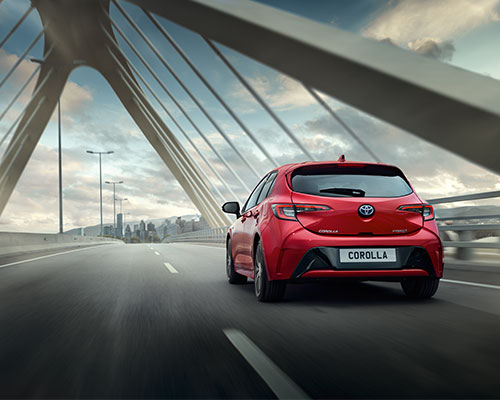 I’d personally have the hatch all-day long. The sloping rear roofline helps with the sporty look, but there is a downside – anyone tall will find the rear very tight for headroom. The rear doors also have a very narrow opening so loading car seats isn’t very easy at all. The boot is about the same size as the rest of the cars in its class – the rear seats fold to extend the boot.

The car’s interior is dominated by an infotainment screen in the middle of the dash. This controls the satellite navigation, phone and radio. The top-of-the-range car has leather and Alcantara upholstery, which just oozes quality.

Most models have a digital speedometer in the middle of the speedo, a little display lets you see the car’s range-average fuel consumption. On either side of the speedo there are analogue dials for the fuel tank and water temperature etc. The interior is much better than previous Toyota’s, but it’s still no match for the Golf, which has a really classy interior.

The Corolla is priced from £20k and the range topping Excel comes in at just under £30k.

The Corolla is available with three engines. The entry level engine is a 1.2lt petrol engine, and both the 1.8lt and 2.0lt engines have hybrid technology. The 1.8lt engine will be the best seller.
The batteries aren’t massive, so they don’t take up too much boot space. The 2.0lt engine’s batteries do take up quite a bit of boot space – the upside, however, is the fact you can drive the car in
electric mode up to 70mph.

The other upside is the car’s fuel economy is in the mid 50s. You’re getting diesel economy but with petrol and electric power. The Corolla is 60% stronger than the outgoing model. It’s also the first Corolla to use a new global platform. I’m sure it will do well in its forthcoming N-Cap safety ratings, especially with the car’s autonomous driving features along with the air bags all over the cabin.

To help improve the drive, Toyota have given the car an independent rear suspension and this does a great job of soaking up any imperfections in the road or potholes.

The new Corolla has three drive modes. ‘Eco’ makes you drive much more economically, ‘normal’ mode is as its name suggests – the car feels much smoother over bumps and potholes, and ‘sport’ mode changes the colour of the speedo to red, and the ride feels stiffer.

The car is great to look at and it is very stylish, so anyone looking for something other than the usual European rivals should really give this car a test drive.