The Fenwick family tree is one of success, splendour and a whole load of style. It’s a story we’ve been longing to hear. Elysia Agnew catches up with author Christopher Fenwick over coffee at the flagship store in Newcastle... 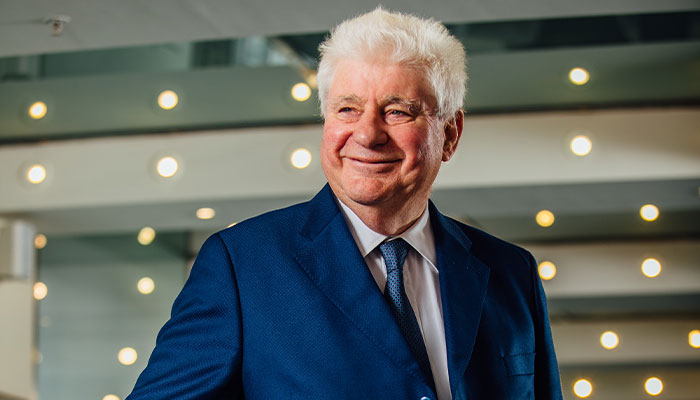 “How did this man born in Richmond, Swaledale, come to found a business in Newcastle and then go on to start a business in Bond Street?”, is the first question asked in Christopher Fenwick’s new book, ‘The Story of Fenwick and its Family’.

Christopher Fenwick, 82, once Marketing and Development Director – and most famously, the brains behind Newcastle’s moving Christmas window – has been logging his family’s history for some years, and felt now is the time to tell the tale.

The development of the business and the success of the Bond Street store took Christopher down south in 1965, but Newcastle and the North East will always have a place in his heart, as the home of Fenwick, the place where the family’s business has flourished, and the home of Newcastle United.

Following the first game of the new season at St James’ Park, we’re catching up over coffee at Fenwick’s Tivoli restaurant.

Set up for service with white tablecloths and crockery worthy of a quintessentially British tea party, I arrive to find Christopher sitting with a coffee by the window overlooking Blackett Street, Grey’s Monument and beyond – quietly reflecting on his latest project – telling the story of the much-loved family department store he calls home.

“Very few books like this are published,” he tells me as my pot of peppermint tea is poured.

“The trade is very interesting; there’s always a tale to tell. You become part of the community as a department store. We, really, are the longest running family store of prominence. We’re the fifth or sixth biggest group of department stores, because they’ve either closed down or amalgamated.

“So, for me, it was important to tell our story – our story of great success. And to be able to do that up here in Newcastle, where it all began, is very special.

“We published a book back in 1972, written by Reginald Pound, who also wrote the history of Selfridges. I assisted him with that, so I knew exactly where I wanted to go with it.

“It’s a proper business history,” he tells me.

“But I’ve given it a light, family touch, without being schmaltzy – I hope. That was the aim, anyway.”

The book itself talks about the rise of the Fenwick brand – and the family that have made the business tick. Its founder, Mr John James Fenwick (Jim to his friends and family), was a ladies’ tailor – specialising in giving good value for good things. “Which Fenwick, at its best, has always done,” says Christopher.

“My great grandfather (Jim), did that – and he did it very well. But he always wanted to go to London, and so he found a site on Bond Street in 1891 and Fenwick flourished,” he smiles.

But before we get into the history of the department store we all know and love, a bit about our author… 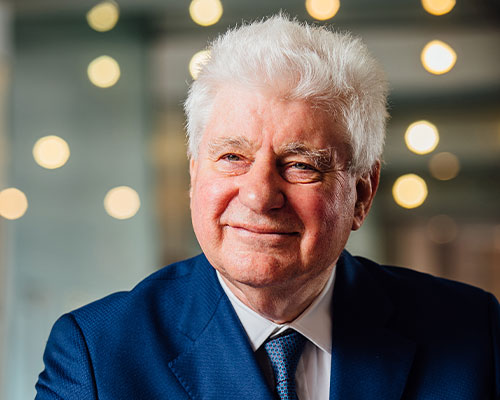 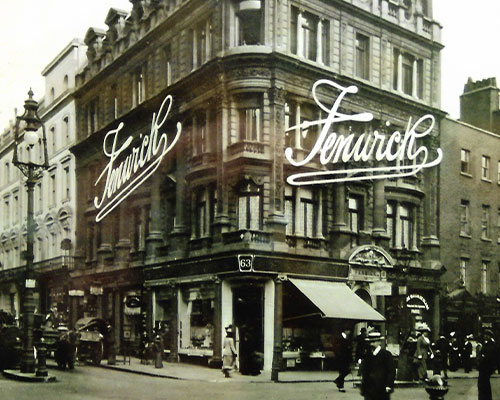 “I started working for the family business when I was 15 – long before I’d left school. We lived up here in Jesmond,” he recalls.

“The Newcastle store was very much a part of my childhood. Father would walk us down here when he had a bit of business to do and he would introduce us to all of the staff. We knew a lot of people and they all knew who we were.

“We would go into the ticket room and write the tickets, because we used to paint all of the price tags back then. When we visited London, we would play buses with the coat rails,” he laughs.

“It was a big part of our lives growing up. Our parents did very well having fun with us that way.”

Christopher went on to become Marketing and Development Director at Fenwick, and very much a part of the company’s success and progression over the years. One of his greatest marketing masterpieces was the iconic moving Christmas window – a monumental part of the festive season up here in the North East.

“We always reckoned to dominate Christmas in Newcastle, and then a furniture store called Callers introduced animated windows.

“We had a wonderful display manager, Bill Cass, who had the idea of introducing music. He had done some marvellous window schemes for us, so we got talking and I said: ‘This year, we’ve got to beat Callers!’ – and so we went off to Paris the Christmas before, where we’d often meet to get ideas – and there it was, a moving Christmas window.

“We came back and had the idea of doing Camberwick Green, then we went on to do Chigley, Rupert Meets Santa, Sooty’s Circus and so on. After that, we found somebody from Colchester who would do mobile windows for us in a story format, and we’ve done it ever since.

As Christopher’s climbed the career ladder at Fenwick and the business continued to grow, demand was high in the south, and so he set up home near the big city. “I live in Pangbourne now,” says Christopher.

“I’m a metropolitan guy. My brothers were up here and we were expanding down south, so there seemed to be opportunities down there for me.

“Newcastle obstinately remained the same size as the London business. We had two great leaders in Richard Watts Jones at Bond Street and George Bell up here, and they helped us develop the stores very well indeed.”

Fenwick is a business with family at its heart. And the Newcastle store is where the business found its feet. Very much the flagship store.

“Fenwick is unique because of the mix of family, senior management and general staff – who don’t want to be entirely usual or orthodox – they want to do things in a particular way,” says Christopher.

“Be ordinary, without being pretentious. If the ordinary way is the simplest way, then that’s the way to do it.”

A great department store has got to work on comradeship and community, and after speaking with Christopher for some time, it seems that is what has held this business together for such a long time.

What started as an independent tailor on a corner on Northumberland Street, has gone on to become one of the country’s most successful, family-run department stores – and for that, we give thanks to its founder. 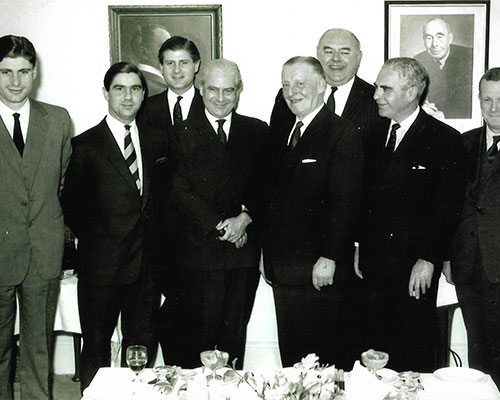 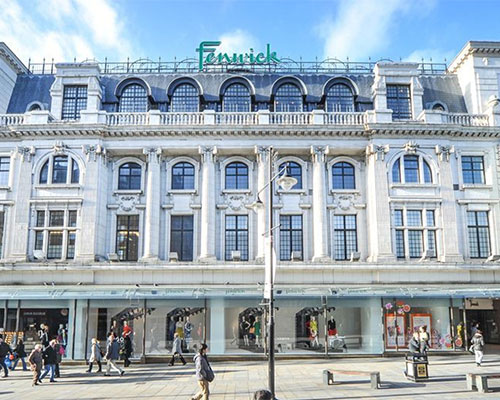 Jim’s story started, not in Newcastle, but in nearby Stockton-on-Tees, where he trained for seven years as an apprenticeship tailor. On completion of his training, as quoted in the book, his master told him: “I am more than pleased with the ‘shapes’ you have made… but in common fairness, I feel I must tell you that you are wasting your time in a situation such as this. You have such a gift for the work, that you must seek out some position which will give you greater scope, perhaps in Newcastle.”

Jim took his master’s advice, upping sticks to continue with his training in Newcastle at Bragg & Co – the great drapers of the age. In 1882, at the age of 36, he launched his own tailoring business on Northumberland Street, before opening in London – which was quite a thing for a lad from Swaledale.

“He was a great family man. It was Jim who really made a family as well as a business,” says Christopher.

“He had three sons. The third tragically died quite early in life in the 1930s, but his two sons, Fred and Arthur, carried on. Fred had two sons, who were Trevor and John – they were to be the next directors in the business.

“Trevor then had my brother John, my brother Peter and myself. My father was a terrific fashion man. He had a wonderful sense of style.

“‘Fashion should be as fresh as flowers’ – he used to say.

“He expanded the businesses a lot. In five years, Bond Street multiplied its turnover by six. The business was, of course, set up by the founder and his sons, but beyond that, women’s tailoring lost its importance to ready-to-wear, and that’s where my father came in to his own.

“Ready-to-wear was a huge business at that time. What encouraged it was the technology of making uniforms, because we were making them by the millions in the war. This showed us how to mass produce fashion clothing.”

Fenwick is predominately a fashion store, and that is certainly how it started, but over the years, it has adapted to trends and the needs of customers, growing into the great department store it is today. But just how did Fenwick grow?

“In the 1960s, Newcastle was changing its layout as a city. Eldon Square Shopping Centre was built around our store, because we had the biggest flow.

“We, at the same time, had ‘The Master Plan’. We rebuilt the entire store, expanded beauty and introduced household goods like linens, glass and china.”

Riding out the storm and adapting to the market has been a key part in the success of the Fenwick brand. There have been some difficult times in retail over the years, but if you have distinction, among many other things, you’ll come out on top. A philosophy, it seems, Christopher and I share… 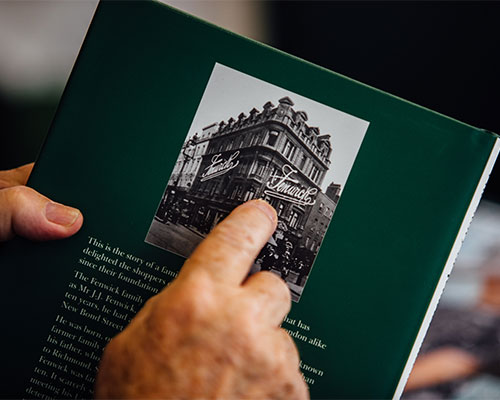 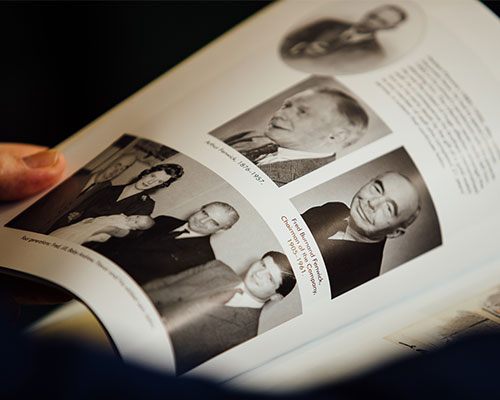 “Distinction is key,” he says.

“If you take the military for example; the Royal Marines are soldiers like everybody else, but they’ve got a distinction.

“And it’s the same in Fenwick. We’ve always done things in a special, particular way. Having the family involved in the business has been part of the creation of the overall envelope, and it has given it a certain character.

“For our success, we also give thanks to our fantastic staff. They’re very much in charge of us.

“It’s the staff, the stock and the steering – if you want to alliterate it!”

With trusty staff spanning all nine sites, stock from all four corners of the world, and the family still involved in the steering of the ship, Christopher is confident the Fenwick business will continue to flourish. “We’re rolling out the online side of the business now. We’re a little late in the game, but we like to do things well,” he explains.

Christopher will be launching his book, ‘The Story of Fenwick and its Family’ at Waterstones on October 9 2019 – in the city where it all began. 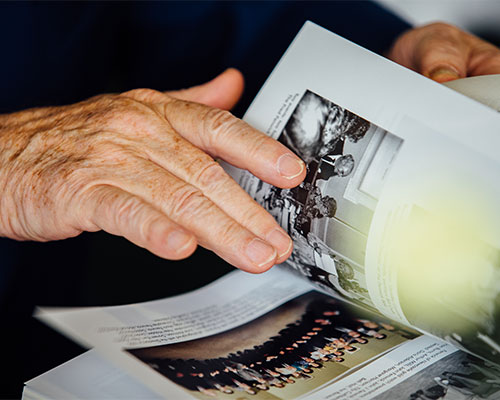 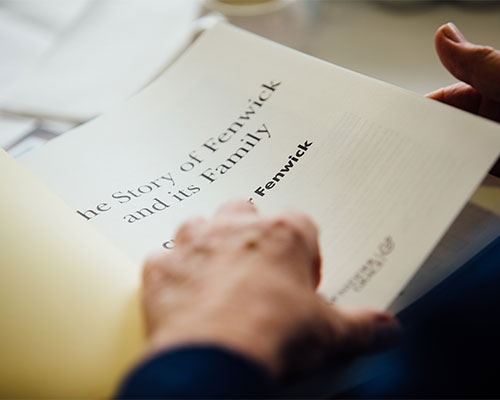 “It seemed like the right thing to do. It’s where we are from – it’s our bread and butter.

“Newcastle will always feel like a home for me. I’m a season ticket holder as St James’ Park, so that encourages my regular visits. I’ve followed Newcastle from an early age. It’s natural, isn’t it?

“I’m up here about once a fortnight. I go to the games, sit alongside a fella with language you wouldn’t appreciate very much,” he laughs.

Christopher has, of course, taken a step back from the direct running of the business in recent years, but it’s something that will always be a part of his life.

“I’m avuncular, I think is the best way of describing it,” he says.

“I’ve got nothing to do with the running of the store, but I like to think I’ve got many friends here. I say hi as I go by and take a strong interest for the family. That allows me to have the time to write a book, which I’m sure you will enjoy.”

The book is available to purchase at Waterstones: waterstones.com