Electric cars have been around for some time now – but look around you on the roads and you’ll be hard pressed to notice many truly one hundred percent plug-ins.

Perhaps that’s because, for electric cars to become fully feasible, they have to offer the same levels of comfort and convenience as their petrol or diesel counterparts; and be priced just as competitively.

Hybrids go some way to easing our conscience about burning all that oil, but they are surely a halfway house; a compromise while we’re waiting for something better to materialise.

For some time now, we seem to have been on the threshold of that better place – the battery-powered transport revolution maybe – though could 2019 turn out to be the year when more of us were able to make the leap?

Tesla has been one of the leading lights in pioneering the development of electric cars pretty much since it was founded in 2003. The company has introduced a series of eye-catching variants over the last decade, from the sleek Model S saloon, to the sporty Roadster, and the SUV-style Model X. And later this year, the Model 3 will be added to the roster.

The Model 3 is Tesla’s big hope for mass market supremacy, and may well be the car that will finally herald in the era of the plug-in. It will still be in the premium car bracket (starting at around £35,000) but with measly running costs and zero emissions, it will offer many motorists a far more appealing and genuine alternative to the petrol or diesel.

With a range of around 300 miles, the majority of motorists may only need to charge the vehicle once a week, while it will undoubtedly borrow at least some of the luxurious and technology-rich features of the company’s other brands.

The new model has been dogged by production issues at the Tesla factory in California, but at the start of April, Bloomberg reported that as many as 80,000 Model 3s are rolling off the Fremont automated production line every week. That’s a lot of cars, but then there are thousands upon thousands of orders waiting to be honoured. If the production estimate proves to be correct, then Tesla will surely be on to a winner with the 3.

Over the last decade or so Tesla has proved that it is at the front of the plug-in pack. Very few other manufacturers can offer Tesla’s combination of battery power, range, charging time, charging network, build quality, comfort, and pure technology. Teslas are easy to use and offer almost conscience-free motoring (all you have to worry about is how green the electricity your using is).

The Model S, which we featured in Luxe last year, has proved an amazingly strong advert for Tesla’s merits in the saloon marketplace. And now the Model X is doing the same in the SUV class. 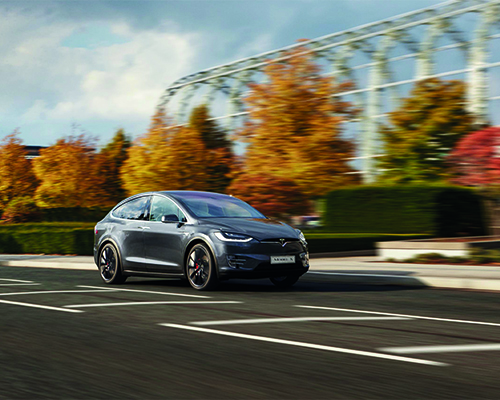 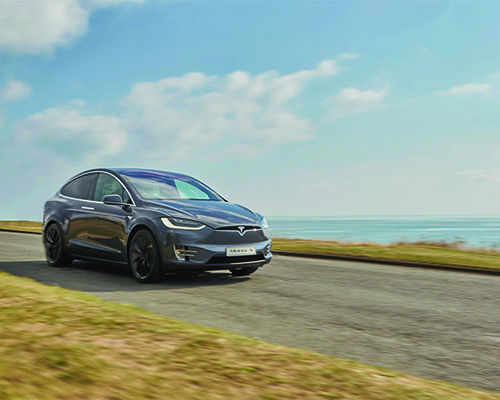 The Model X boasts space-age looks and no short measure of advanced capabilities.

With its large single screen display, the X looks pretty similar inside the cabin to the S; it’s just much larger of course.

Other notable differences include the wrap-over windscreen, which eats into much of the space where the car’s metal roof should be, and opens up a panoramic view of the world, and the top-opening DeLorean-like rear doors, which certainly attract attention.

The X also offers the option of seven seats. All in all, it’s a more practical version of the S.

And with a range approaching 350 miles, acceleration of 0 to 60mph in under three seconds, and a top speed of 155mph, the X is no slouch in performance terms either. In fact, the acceleration is awesome; push-you-back-in-your-seat, take-your-breath-away awesome, though all that power is also incredibly easy to control – an experience that very few rivals can seriously offer but without all the drawbacks (like the gas guzzling, for example).

The big screen is larger than most laptops and enables access to all of the car’s controls, from the sat nav, to digital radio, to your Spotify account, to the heating controls (the world’s first medical grade HEPA air filter system), and everything else. It’s as simple to use as a smartphone – and the X will stay that way, as over-the-air software upgrades will keep it at the top of its game.

Safety is also a key feature of all Teslas with all-wheel drive and automatic transmission. The X is expected to gain a five-star safety rating in all categories in due course, which would make it the first SUV ever to do so. And, of course, Teslas also boast the ability to drive autonomously (look, no hands); a slightly scary prospect perhaps but quite legal in certain places and ultra-safe too. The impending 5G network launch will improve its autopilot capabilities yet further. In five years, autonomous vehicles may become common on British roads and Tesla will be leading the way. 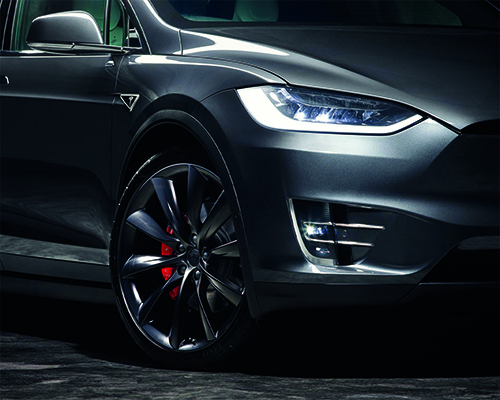 One of the key issues that sets Tesla apart from most other plug-ins is the efficiency of its batteries – it’s possible to achieve well over 100 miles of range from as little as 30 minutes on a supercharger – while the charging network the company is establishing across the UK is second to none. Even very long journeys can be done in the same time as a conventional car.

The X is simply gorgeous, and easy, to drive and use. With a price tag of around £80,000, the X is right up there with the S in terms of being a luxury vehicle, but it offers a supercar experience in a highly practical SUV package. There’s got to be a market for that.

And if the price is still a little too steep, there’s always the Model 3, which is likely to offer a similar diving experience to the X (or S for that matter).

After promising to revolutionise motoring for many years, Tesla seems to be on the cusp of establishing itself as the world’s leading plug-in manufacturer. By the end of the year it will have a range of vehicles on offer to suit all needs and most pockets.

See the full range of Teslas at: tesla.com