The world’s best-loved 50s musical returns to the stage at the Sunderland Empire this summer. The feel-good phenomenon is sure to get you into the summer-loving spirit, says Chloe Bell. 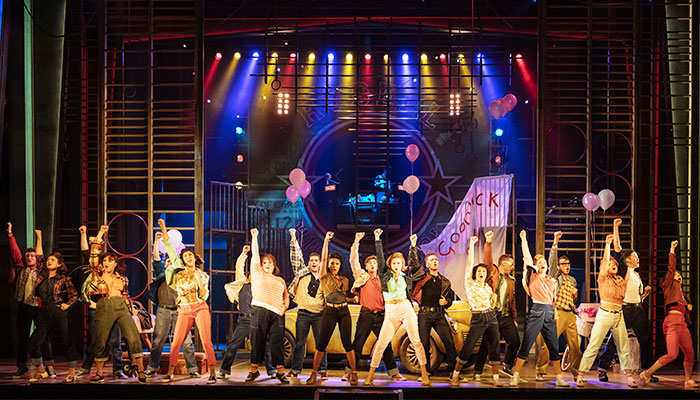 This adored play has everything – friendships, romance, heartbreak and a whole lot of singing and dancing. Deemed the most successful movie musical of all time, Grease takes to the Sunderland Empire stage, wowing audiences with its truly electrifying array of talent.

After a whirlwind summer romance, slick stud Danny and pure-hearted, sensible Sandy meet again unexpectedly when she transfers to Rydell High for her final school year. Danny is the leader of the leather jacket-wearing Burger Palace Boys, while Sandy becomes part of the Pink Ladies – a popular clique of pink-wearing girls led by the rebellious Rizzo.

Watch with bated breath as you wait to find out if they can put aside their differences. Will they be able to overcome the hardships of high school cliques? Or will it prove too difficult for them?

Choreographed by multi-talented choreographer, theatre director and former dancer Arlene Phillips, prepare to be amazed with dazzling dance routines from start to finish.

Dan Partridge takes on the role of suave Danny Zuko. He is most recently known for playing Rum Tum Tugger in Cats though he has had other prominent screenplays as Link in Hairspray and Pepper in Mamma Mia.

Martha Kirby makes her professional debut as Sandy Dumbrowski following her graduation from the Guildford School of Acting this summer. The lead in Grease is definitely set to get her name in lights. Her solos in the musical include Hopelessly Devoted to You to which she added so much emotion and feeling that some members of the audience could even be seen tearing up. All we’re saying is… watch this space.

Rhianne-Louise McCaulsky plays Rizzo. The audience watch her confident exterior crumble when she reveals it is all an act. Through her beautifully emotional rendition of There Are Worse Things I Could Do, she shows she is not an ice queen after all.

The theatre erupts with roars of cheers as Peter Andre emerges in a fresh white suit and fluffy pink wings to belt out Beauty School Dropout.

A feel-good tale of romance and friendship, Grease is bursting with hits of musical magic that you can’t help but sing along to.

The unwavering energy from the cast is sure to have you leaping from your seat for a final sing-a-long as the night comes to a close with one last rendition.

It wouldn’t be Grease without that well-remembered high school dance-off. This is where Arlene Phillips’ outstanding choreography really comes into play. With tricks and lifts galore, this spectacular scene is hosted by radio personality Vince Fontaine, played by Darren Bennett, who brings a whole lot of flair and humour to the stage. Scanning the dance floor, he eliminates dancing duos one by one until there is only one couple left to take the trophy.

Now, let’s talk about Sandy’s fabulous transformation. After calling on Frenchy to give her a makeover, Sandy returns to the stage as a cool, new, confident woman – leaving behind the infamous Sandra Dee reputation she has come to loathe.

This young cast burst onto the stage with vitality, passion and boatloads of energy in this revamped rock ‘n’ roll musical. Grease would not be complete without the classic songs we all know and love, including Summer Nights, Greased Lightnin’, You’re the One That I Want and more.

Everyone – whether you’re hopelessly devoted to the film or just want to come along for a night of feel-good favourites, this is an absolute must. It has everything – romance, friendship, dance numbers, spontaneous singing – and even a celebrity appearance in the form of Aussie heartthrob, Peter Andre.

The timeless musical masterpiece is in town for just five days – all the more reason to see it from now until Saturday 3 August 2019 at the Sunderland Empire. Grease is the word.