Inspired by food and travel adventures in France, Andy Haimes and Emma Mate brought a charming memento back to the North East.

Audrey is a sprightly and chic 73-year-old who loves to feed people. She’s not overly keen on chilly Northumberland winters and is partial to some TLC, but once the sun starts to shine, she likes nothing more than hanging out by the coast.

She’s the showcase for Adventures in Aude. The very name is a play on words. Audrey the very vintage Citroen van has travelled across Europe from her sunny home in the Aude region of France where owners Emma Mate and Andy Haimes rescued and revamped her.

The culinary pair had spent years as chefs in France; in chalets for the ski season and then cooking for gourmet guests holidaying on barges on the beautiful Canal du Midi in the Languedoc region.

When Emma became pregnant with baby number two, they realised that their waterborne adventure had to be re-thought. They decided to head back to their native North East – and Audrey came too.

“She was a pickup truck”, says Emma.

“We had to get her on a trailer to get her back here – I was nine months’ pregnant at the time!

“Then it was a case of getting her fixed up – a paint job and interiors sorted. She needed some TLC – she struggles in winter – she’s French!”

Now she’s a popular party girl and loves a big occasion. Audrey pops up at weddings, parties and food markets – with a hectic schedule looming this summer across the North East. 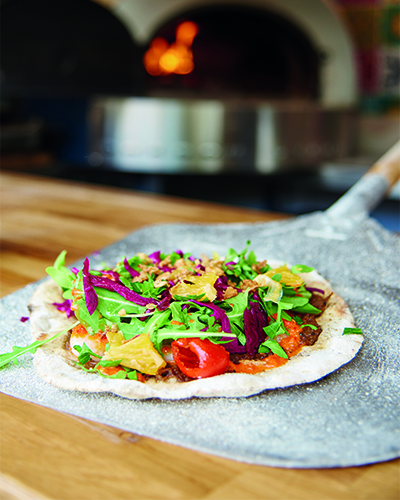 That’s as much to do with Andy’s impressive food as it is with Audrey’s chic charm.

At their catering kitchen at home near Bolam Lake, Andy and Emma specialise in super-fresh and local food with something of a Med/Moroccan twist.

Lots of lovely-to-look-at vibrant, jewelled salads inspired by Ottolenghi, as well as tasty flatbreads cooked on Audrey’s wood-fired oven. They will cook up delicious pizzas too.

Food is inspired by the seasons, something Emma and Andy learned to love when they were on the Canal du Midi and the local markets were a daily destination for ingredients for the day’s meals.

“In France it is easy because the markets are filled with what is in season, it is less easy here. Andy does a lot of pickling – cabbage, beets, turnips etc. We will be picking loads of wild garlic for pesto.

“We like to make really healthy food. Our salads are really popular – there are a lot of plant-based dishes and we had a vegan mezze box as a special recently which was popular”, says Emma.

In their world of work as private chefs, Emma and Andy had to respond to different food wishes and whims from their clients.

Americans on the Canal du Midi were seduced by classic French cuisine for example, but the pair became adept at responding to every food need.

Today, thanks to Audrey they are becoming talked-about for their fresh and healthy take on street food.

Their girls Martha, two and Ayla, four are Audrey’s little sisters and will be joining her on at least part of her summer food tour.

To follow the Adventures in Aude food trail, check out: adventuresinaude.co.uk