The all-new BMW 8 Series is a statement-making sports car that comes alive on the open roads...

The original 8 Series was launched back in 1990 and it certainly was a head-turner. The car’s futuristic looks were well and truly ahead of their time, from the pop-up head lights, to the V12 engine mated to a six-speed manual gearbox. Other groundbreaking features were the multi-link rear axle along with the drive by wire throttle – very impressive at the time.

The 8 was the rst computer-designed BMW and I think they did an amazing job. Unfortunately, eventually BMW stopped production of the 8 in 1999, but the car is still a real favourite today.

Fast forward to 2019 and the all-new 8 Series has been launched again – and one thing you can’t help but notice is just how big the car actually is.

Thankfully, the car has cameras and sensors all over the place and, believe me, they are definitely needed. This time round, the new car faces stiff competition from the Aston DB11, Mercedes S Class Coupe and Bentley Continental, which are all very beautiful- looking cars. The 8 Series really has its work cut out. 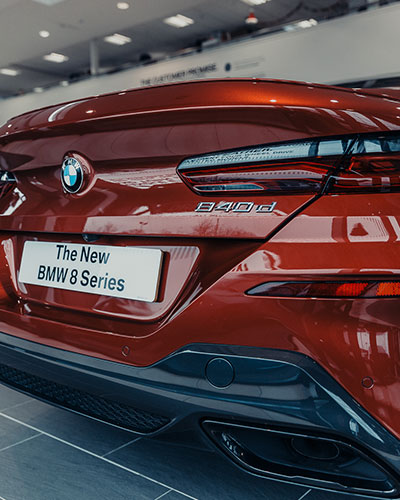 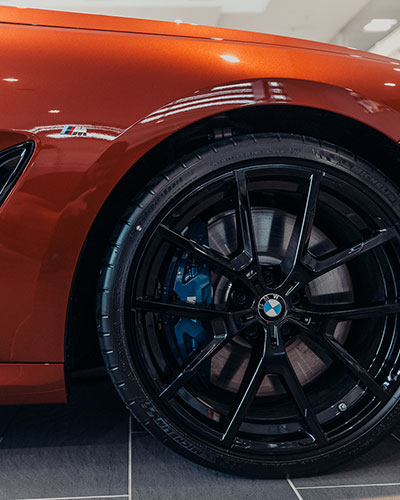 The new 8 looks like a stretched out 6 Series that’s been to the gym a few times! It looks really aggressive from the front and the massive new trademark kidney grills are amazing.

The car I drove was a real head-turner of a colour – a bright, burnt orange. Fitted with black alloy wheels and a carbon roof, it looked absolutely stunning. If you saw this car approaching you in your rear-view mirror, you’d just move out of the way. It looks so mean and menacing.

The previous 8 Series had some amazing technology, so BMW had to up their game with the current 8. It is a four-wheel drive and has four-wheel steering, active anti-roll bars, laser head lights and the latest in Driver Assistance Technology.

BMW’s latest iDrive is the best so far; it features large icons for all of the major functions, which makes it extremely easy to use.

The car is initially launched with two engines and you have a choice of two V6s; petrol or diesel. Both engines will get you to 60mph in under five seconds – very impressive.

As this car is a GT Coupe, I’d be tempted to go for the diesel, especially if you’re planning on using the car to travel across to Europe. The engineers have made the diesel engine sound more like a petrol V6 inside by pumping the sound of a petrol engine via the speakers. Stand outside of the car and you’ll be under no illusions that this car is actually a diesel.

The car features a digital dash, a mix of lovely metal and sumptuous leather, but the dials in the 8 were a bit of a strange shape and I didn’t like the way the rev counter worked the wrong way. The satellite navigation, in the middle of the dials, was also quite confusing. The optional crystal gear knob and iDrive wheel are a bit gimmicky if you ask me. 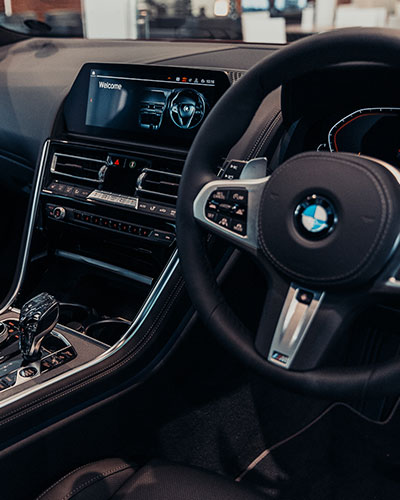 Getting into the rear is a challenge, as it seems to take the seat a lifetime to move forward. Getting into the back is a bit like doing the limbo.
It’s not all that easy sitting in the front either – trying to reach my seat belt was a challenge. In a Mercedes Coupe or Convertible, the seat belt is passed to you and I think that this would be handy in the 8.

Take this car to the country roads, put it into Sport+ mode and it transforms into a mighty sports car. Thanks to its four-wheel drive and four-wheel steering, along with the adaptive suspension and active roll bars, which use electric motors to lean the car into a corner as soon as you turn the steering wheel, it promises a thrilling, yet controlled, ride.

The car’s driver aids make sure you don’t stray out of your lane, but if you do, the car gets you back on course, albeit, with a quite harsh tug of the wheel. If you take your hands off the wheel for too long, the system gets annoyed and alerts you to put your hands back to where they need to be.

The stress-free cruise control, which watches the road ahead and accelerates and decelerates the car, can be set to the distance between the car ahead, so it isn’t braking every two minutes.

I really enjoyed my time driving the 8. I know it’s not a cheap car, but it is, however, cheaper than all of its rivals. If you’re looking for a GT car to take you on a road trip around Europe, it has to be at the top of your list. It’s not as beautiful as an Aston DB11, but it’s not as expensive either! I’d like to thank Richard at Cooper BMW for sorting the car out for me and I wish him all the luck in the world in his new role at the dealership.

See the video below for thrilling footage as Bob gets behind the wheel of the BMW 8 Series, courtesy of Cooper BMW Durham.