Jim Moir (aka Vic Reeves) swaps his ‘Big Night Out’ for a trip back up north to showcase his first ever art exhibition at Newcastle's The Biscuit Factory. A comedian with art at his heart...

The comedian, actor, presenter and artist best-known by his stage name, Vic Reeves, grew up in Darlington and is delighted to return home to showcase his collection of paintings, drawings, etchings, photographs and sculptures.

‘A Mountain of Turkish Delight’ is a new collection of works inspired by familiar northern faces and landmarks, showing at the Tyneside gallery from 9th – 19th
May 2019. 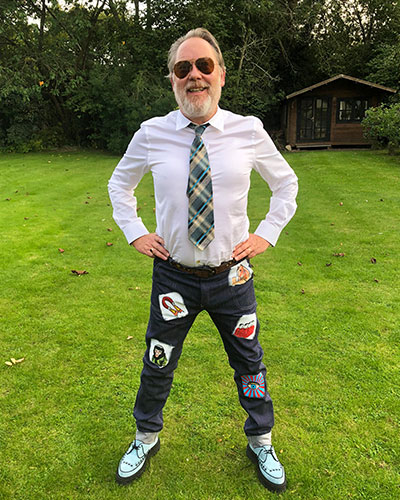 MY ‘A MOUNTAIN OF TURKISH DELIGHT’ EXHIBITION AT THE BISCUIT FACTORY…

Is really just a collection of the drawings, prints and paintings I’ve been working on over the last year or so. The exhibition doesn’t follow a particular theme, but you might see some familiar faces, nods to the north and a bit of TV culture thrown in.

ART HAS ALWAYS BEEN A BIG PART OF LIFE…

People just don’t know it! It’s something I’ve done forever – the TV is really just a side-line to the art. I was into art duo, Gilbert & George when I was at art school and I put on a performance piece, which turned out to be Big Night Out. So I guess the TV stuff was a by-product of what I already did.

A DAY IN THE LIFE OF ME…

Includes a bit of everything: art, comedy, writing. I dip in and out of various things, but I consider it all art. I’m what you might call prolific – in other words, I just can’t stop!

I work on my art virtually every day, but a normal day ‘at the of office’, so to speak, would be me writing with Bob. We used to have an actual of office, but we’re both tight so decided to write in my kitchen instead!

We’re currently busy putting together another Big Night Out for the BBC. It’s been 30 years since the first one, so it’s going to be something quite special. Not only do we write the show, but we also design the costumes and get involved in the general artwork. Everything that I’ve ever done has always had a heavy leaning towards art and design.

I’ve also got two films on the go at the moment. Most recently, I’ve been in London writing Disco Pier with an actor called Tony Pitts.

BEHIND THE SCENES AT BIG NIGHT OUT…

Is just an absolute hoot, to be honest. We’ve kind of unintentionally got a format formula in place, then we just fill in the gaps. We start off with a song and dance routine, sit down, do a routine at a desk, then we move on and get into the sketches. What we like to do is film all of the sketches in a small theatre. It’s great to do it live – we film the whole thing in half an hour! It’s a lot of fun when we can get the audience involved – they go along with you and the whole thing just comes together effortlessly.

I’ve done TV shows, like 8 Out Of 10 Cats and things like that, and they take about three or four hours to film. You’re getting bored, the audience is getting bored – it’s hard work. We like to create an atmosphere where we are as excited as the audience! We’ll write it all, film the sketches, then chuck it all at a small audience and just make sure that they’re having a good time. 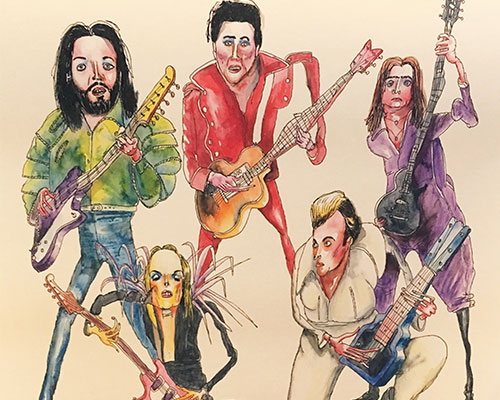 RETURNING TO THE NORTH EAST TO SHOWCASE MY ART…

Is very exciting to me, as a lot of what I do is inspired by where I come from. My dad worked at The Yorkshire Post in Leeds, so I was born a West Yorkshire man, before moving to Darlington when I was five. I left the North East in 1979, moving to London and then Kent, but it’s a place I’ll always consider home.

I’ve been out of the area for a long time now – but I keep thinking ‘I really want to go back and do a proper tour of where I used to hang about’. I love it up here. I don’t get back as much as I should do. I’m hoping to visit the exhibition – but, as always, it all depends on babysitting duties!

I ENJOY SPENDING TIME UP ON THE NORTH YORK MOORS…

But I’ll tell you what I really love… Alnwick – and all of the nearby Northumberland villages. Now I’m talking to you, I’m selling myself a really good summer holiday. I’m going to make everyone go up to Northumberland for the summer! The school holidays are coming up and I think that’s where we’re going to go. I’m there – I’ve just decided.

NEXT UP ON THE AGENDA IS…

Another Big Night Out. Also, ten years ago we started writing something called The Glove – we’re going to be filming that in September. Then I’ve got my show at The Biscuit Factory, I’ve got another show at the Grosvenor Gallery in London, then that’ll do me for the year I think!

I’ve got a luxe lifestyle you know, I just work when I want… See you at the exhibition – or I might even bump into you in Alnwick!