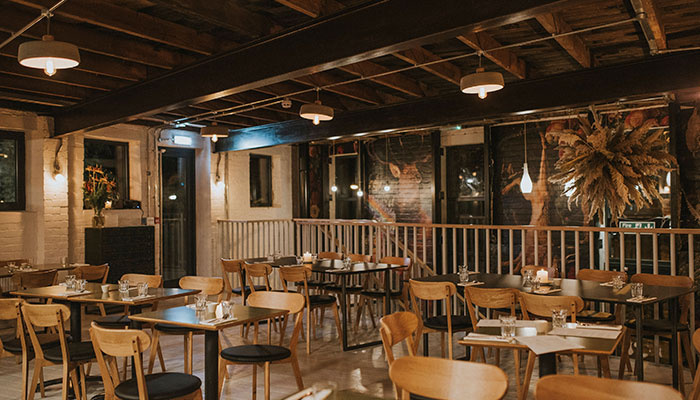 When she’s not stuffing pickled cucumber into Kilner jars, organising Jesmond Food Market or writing up recipes for crumbly almond cake, lemon posset and scrumptious suchlikes, Anna Hedworth can be found heading up the kitchen in  her brand new restaurant.

For the last three and a half years, her culinary baby, Cook House, has been going strong; winning awards (Good Food Guide? tick), enjoying national recognition (The Times? The Guardian? Channel 4? Radio 4? Big fat ticks) and feeding its legion of local fans from two small, but perfectly-formed, shipping containers in the heart  of Ouseburn Valley.

Now, though, things have moved on. Though not far – a whole five minutes down the road, in fact. Yep, venture even further into the depths of the Valley (Foundry Lane to  be exact) and you’ll discover the new-and-improved Cook House; bigger and better-looking (who knew that was even possible?) with mouthwatering menus that now stretch from brekkie and brunch to lunch and dinner.

The change of address, Anna tells me, was prompted by the news that Cook House’s original spot in trendy Ouseburn was to be redeveloped. Taking it as a sign from above to move on to bigger and better things, she set her sights on a new place – and reached out to her customers and the region’s foodies for help. 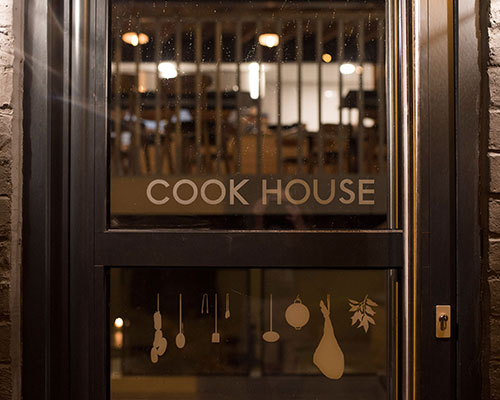 Soon, a Kickstarter page was set up in a bid to raise enough cash to bring Anna’s dream restaurant to life, offering people special rewards in return for donations – everything from cookery classes and supper clubs, to gift vouchers and tables for lunch and dinner.

Within a month or so, thanks to the public’s generosity and unwavering support, Anna and her team had smashed their target. The building work began and in December last year, they opened the doors of their brand new pad.

Today, the results speak for themselves. What a great job they did. It’s apparent  that this isn’t just a place for foodies to fill their boots; it’s also a little slice of heaven for interiors-addicts.

Oh and FYI: a seat on the top floor guarantees you views of the open kitchen, but if you fancy making dinner a more intimate affair, ask if you can be seated downstairs. It’s darker and cosier. 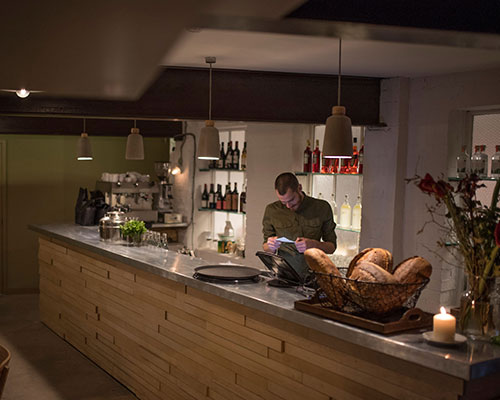 But let’s talk food. I wouldn’t usually order a ‘snack’ before my starter, but when faced with options like charcuterie and warm sourdough, tempura cauliflower and Anna’s sent-from-heaven bread and butter pickles, frankly, who could say no?

My pal and I settled on the cauliflower in the end – a total triumph. For a fiver, we got a good handful of florets in the lightest, bubbliest, golden brown batter that delivered audible crunch. A scattering of onion seeds ramped up the flavour, as did the punchy homemade aioli that accompanied them. Glorious finger food. Get dipping and enjoy.

Starters were the Korean BBQ chicken skewers with a slightly spicy gochujang aioli – something in between the garlicky Mediterranean stuff and an Asian red chilli paste. It ticked the boxes, the meat was wonderfully juicy, but it was the roast brussels sprouts that brought big smiles to our faces. You get a good amount, cooked ’til tender (but not mushy), drizzled in a zippy curried aioli with pickled shallots for tang, toasted walnuts and fragrant, feathery springs of dill.

For mains, I took a risk and ordered celeriac instead of meat or fish. Partly because I’m always intrigued to see how places tackle their veggie options (far too often they’re neglected), but also because I don’t think I’ve ever ordered celeriac in a restaurant and actually enjoyed it. It’s a bit of a strange, bemusing vegetable, if you ask me, and executed poorly it can taste god-awful. Done properly, though, and it’s the stuff of dreams.

Fortunately, Anna nailed it. Slow-roasted ’til slightly charred on the outside, but soft and creamy on the inside. Well-seasoned, too, served with a very pleasing amount
of puy lentils, clusters of goats cheese and a dribble of fresh salsa verde.

It seems all you veggies out there can breathe a sigh of relief here. Not only are you guaranteed hearty helpings of goodness (I was stuffed), you’re also promised unfussy, earthy flavours with real depth.

My dining buddy, meanwhile, ever the carnivore, opted for the bavette (flank) steak, with sticky charred spring onions and mini roasties, crushed and golden. Our verdict? We couldn’t fault the cooking of the meat, we just wish we’d have been given a lot more of it. If only to mop up the divine romesco sauce with which it came. Anna’s version of this vibrant Catalonian condiment is absolutely swell; smoky, sweet and nutty. And not overly puréed either – a really nice texture.

We rounded things off with a small slice of dark chocolate and almond cake (if you don’t like overly-sweet stuff, then there’s a very good chance you’ll like this); and a cheese plate for one, showcasing blue, goat’s and cheddar from local names like Doddington Dairy and Northumberland Cheese Company. Cheese here is paired with spiced apple chutney (unfortunately the kitchen was all out when we arrived, so we were given celery – not necessarily a bad thing) and sourdough.

Drinks were beer – there are some great craft bottles on offer – and a zesty, tequila-infused cocktail or two, served in a martini glass. I forget the name of it, but it was a pale pink colour and had orange peel floating in it and chilli salt on the rim. I drank about three of them (somewhat responsibly of course) and even a month or so later, I’m still thinking about them. I’ll certainly be back for more.

And the shop. Oh, the shop. I couldn’t not mention it. A mouthwatering makeshift pantry, if you will, showcasing glistening jars of Anna’s homemade chutneys, pickles and preserves (take my word on the bread and butter pickles – they’re the best I’ve tasted). You’ll also find just-risen sourdough loaves from pals at nearby bakery, Northern Rye, bags of freshly-ground beans from local roasters, Pink Lane Coffee, marmalade oranges, free-range eggs and bottles of speciality wine and beer. A little treasure trove of goodness, in other words. Don’t leave without a brown paper bag of treats.