We catch up with Dr Michael Mosley ahead of his forthcoming theatre tour, "Trust Fast Health", stopping by Sage Gateshead this February. 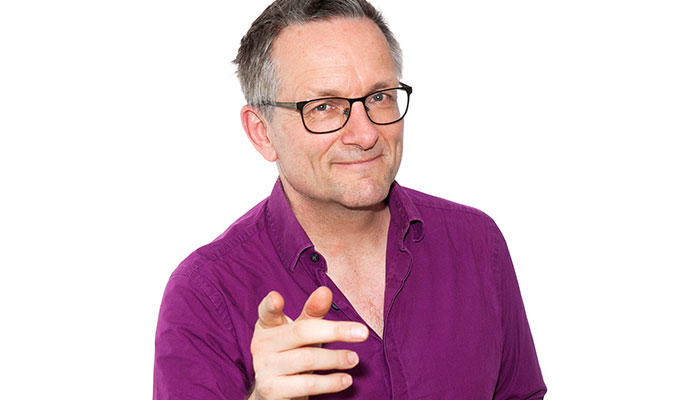 Q: What inspired you to go on tour for the first time?

A: For some reason, about a year ago BBC Worldwide asked me to do a tour of Australia to promote a new book, “The Clever Guts Diet.” I played some really big venues with 2,000 seats.

Q: Was it nerve-wracking?

A: Yes. It was unbelievably scary. I normally only perform to three people in a TV studio, and if that goes wrong, you can do it again and again. But I had huge nerves on the tour of Australia. I’d stand there in the wings thinking, “Blimey, that’s a lot of people, and they are all here to see me! Why am I doing this? Why did I ever agree to this?” It gave me a whole new respect for stand-up comedians.

A: It went remarkably well. You realise that people have come along to the show because they like you, and they tend to be very warm. The time on stage just flew by. It was really exhilarating. Now I can’t wait to do my “Trust Fast Health” tour around the UK.

Q: Do you relish the prospect of doing a Q&A with your audience at the show?

A: Yes. This will be a very interactive show. We don’t want lots of questions about ingrowing toenails, but I’m sure that people will ask very insightful questions. It’ll be great hearing what people find funny and curious.

Q: Are you also looking forward to meeting your fans?

A: Yes. I’ll be signing books after the show, and people can come and talk to me. I love chatting to people. I really enjoy finding out what’s going on with them. People often stop me in the street. They love my TV programmes and want to share their experiences. It’s a fantastic feeling when people tell you that you have helped to turn their lives around. I’ve met people who were going to have their leg amputated because of diabetes who have managed to avoid that by following my advice. You don’t need pills or expensive supplements to turn things around. There is great power in taking control of your own life.

Q: What will you be discussing in the show?

A: First I trained as a doctor, but now I’ve been in telly for 34 years, as a science journalist and behind the scenes. In that time, I’ve seen a huge revolution in medicine and personal health. That’s what I’ll be talking about in the show.

Q: What has changed most dramatically in that time?

A: A number of things have overturned ideas we all previously believed. For instance, a lot of things we were told about diet have turned out not to be true. On my first day at medical school, the Dean said to us, “You’ll study here for six years, but within ten years most of what you’ve learnt will be out of date.” He was right. The medical world’s understanding of diet and fitness is changing very fast, and that’s what I want to tell people about. I’ll be revealing where it’s all going and what the big surprises will be. It’s unbelievably exciting.

Q: Can you give us an example of a medical revelation you will be making in “Trust Fast Health”?

A: One of the big myths is that a fast diet won’t work. But all the evidence now is that rapid weight loss is effective. Your weight loss at two weeks will predict your weight loss at four weeks and six weeks. The only thing that matters is that it’s a good diet. Bad diets will always fail. There are 20,000 different diets out there, and most of them are terrible. Many are dangerous and written on the back of a cornflakes packet.

A: The most popular new weight-loss diet is juicing, but that’s dangerous. It doesn’t give you any protein. We need adequate amounts of protein. If we don’t get it, within 24 hours our body will start to cannibalise itself. Some of the crazier low-protein diets have actually led to people dying of heart attacks. People need to know that.

Q: What positive advances do you detect in our nation’s health?

A: A lot of people are cutting back on the amount of medication they take. Once upon a time, we were just happy to pop pills. Now we are aware that taking all these tablets is not necessarily making us any better. We’re all living longer, but in ill health. Pills aren’t always the answer. There is also now a much greater awareness that food plays a critical role in whether we’ll develop conditions such as heart disease, diabetes, cancer and dementia.

Q: You have had enormous global success with your 5:2 Diet. What inspired you to invent it?

A: Six years ago, I discovered I had Type 2 diabetes. My dad died from that. He did a lot of crazy diets, and none of them worked. That led me to find out about intermittent fasting. Then I made a BBC documentary, “Eat, Fast & Live Longer”, about my search to reverse diabetes, which led to me finding out about the 5:2 Diet. That propelled me into the limelight. I then produced another BBC documentary, “The Truth About Exercise”, 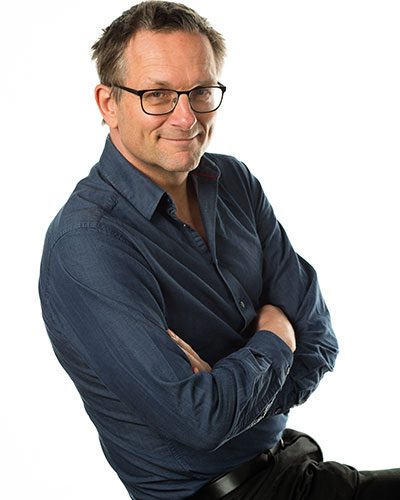 and that was very popular, too. It blew away a lot of myths.

Q: People didn’t know you could diet by doing intermittent fasting. But the fact that I managed to lose twenty pounds and reverse diabetes by following the diet was pretty compelling. As soon as the book came out, it just took off. It’s been a New York Times best-seller, been published in 42 countries and sold three million copies. It continues to resonate. It’s become an extraordinary phenomenon.

Q: Why has dieting become such a vast industry?

A: It’s not surprising. This is the first time in history that people are dying from problems caused by obesity rather than malnutrition.

Q: Do you think “Trust Fast Health” can help to change people?

A: Yes. You start the journey by coming to a show like this. That inspires you to look further and find a supportive community. I’m a big fan of websites – they create a fantastic community. We’re social animals and can get huge support from people who have been through the same thing. People who have lost a lot of weight want to share their stories and show that it is achievable. They know all the challenges and pitfalls and want to tell others about them. This show is a starting point.

Q: Do you have any anecdotes from your time as a trainee doctor?

A: We began learning how to do stitches by practising on oranges, but we soon graduated to stitching people in A&E. I started off by stitching drunk people – they weren’t too worried about what I was doing! My first experience of stitching someone’s head did not go very well, though. When I tried to take my hand away at the end, I realised I had stitched my glove to his head. Fortunately, the patient didn’t notice, but the nurse who was with me was in hysterics!

Q: Have any of your children followed you and your wife into “the family business”?

Q: Yes. One of my sons has just qualified as a doctor. He’s now working in a hospital in Preston as a junior doctor.

Q: Why did you switch from medicine to television?

A: I was becoming slightly disillusioned with psychiatry. I saw an ad in the paper for a job on Horizon, a programme I loved, so I applied for it. At that time, it never occurred to me to appear in front of the camera. But I was very interested in the idea of driving scientific knowledge through television. I went on to enjoy ten years as a director, ten years as an executive producer and so far ten years as a presenter.

Q: What are your hobbies?

A: I love swimming in the sea from June to September. We also love walking. We’ve recently done the coast to coast walk. I’m also a member of an all-male book club. We do expeditions connected to the books we’re reading. We recently did a trip tied to Three Men and a Boat. We did it in an original Victorian rowing boat. That was great fun. We also read Birdsong, so we spent a weekend with a historian discovering the battlefields of the First World War.

Q: What do you hope that audiences will take away from “Trust Fast Health”?

A: I hope that they’ll have a really good laugh – humour is incredibly important. But most of all, I hope they’ll be inspired and think, “Golly, I really want to find out more about this.” People are very interested in this stuff and know it can alter the trajectory of their life. They want to know more about it. My show will give them more information, loads of interesting insights and lots of surprises. People are not going to be told the same old nonsense – they’re going to learn stuff that will blow their socks off. At the end of the show, I want people to turn to their neighbours and say, “Blimey, I never knew that!”

A: Absolutely. People are confused because there is an awful lot of nonsense out there. I want to cut through all that and show people where the truth really lies behind all those bewildering newspaper headlines. I want to debunk all those myths in “Trust Fast Health”. I’m 100 per cent evangelical about this. I’m on a mission!