Cakes and bubbles. Just because it’s January you don’t have to leave them behind. In fact the dull days of winter are probably great reason to succumb.

For the best versions you’re likely to encounter, take a tip – head to Cakes & Bubbles at Café Royal in London.

After his successful pop-up at Hotel Café Royal in 2016, famed chef Albert Adrià – who of course built a gastronomic revolution alongside his brother, Ferran, at the legendary Michelin three-star elBulli, has returned with a truly extravagant adventure in all things sweet and spectacular.

Cakes and Bubbles is his first permanent establishment outside of his native Spain and is as much fun as it sounds.

Adrià, who was voted The World’s Best Pastry Chef by The World’s 50 Best Restaurants, offers a dazzling parade of exceptional desserts; from his signature ‘cheese cake’ to his egg flan, air waffle and doughnut creations.

It’s a really memorable place to visit – also tipping the  ‘most instagrammable’ list for a time. 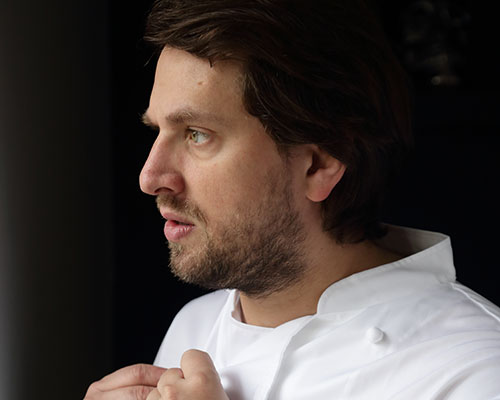 Our base for the stay was Soho Hotel – a great spot in a cool location close to some good eating places such as Barrafina.

You will know my obsession with Japanese food, flavours and techniques by now. I’ve been taking it to the limit lately, experimenting with new dishes for the ‘global’ section of the Raby Hunt menu.

But we take it to the max in January with a one-night-only collaboration at the restaurant with SushiSushi. Celebrated Japanese Kaiseki chef Masafumi Karaki will fly in from Honshu, Japan to bring the true taste of Japanese fine dining to a lucky group of diners.

Dinner will be a multi-course tasting menu in the traditional style of Kaiseki.

Expect the best tuna, aged to perfection, the best pure Japanese wagyu and flavours that have never before been tasted in the UK.

For our menus I’ve been using the fatty otoro tuna which we get fresh from Spain. It is the best in the world, and we age it for a short time to increase the flavour. I serve it with white truffle – it’s been the best season in 15 years for white truffle. It’s arguably one of the best dishes I’ve ever created. Having said that, the new wagyu ‘sando’ is pretty special – a Japanese-style mini sandwich with aged wagyu beef.

We’re using some of the best ingredients in the world – and in Darlington!

Our menu features these on a ‘global’ section which we have a bit of fun with – might be Mexican or Japanese influenced dishes. Then we have the signature dishes such as our salad of razor clams.

I will be one of six Michelin-starred chefs cooking up a storm in a ‘superhero’ themed banquet in the City of London in February. It’s in aid of separated dads and the launch of a new charity, The Fathers4Justice Foundation.
The Great British Superhero Banquet and Auction will take place on 19 February at the historic Gibson Hall in the City of London, and I will be cooking alongside Tom Kerridge, Daniel Clifford, Glynn Purnell, Paul Ainsworth and Michael O’Hare, plus other special guests. The event will be hosted by Radio 1 DJ, Chris Stark.

All funds raised will go to the newly launched Fathers4Justice Foundation, a charity set up to provide life-saving support services for separated dads, including a 24/7 National Lifeline and other initiatives aimed at suicide prevention and helping men in distress.

Tickets are £200 each including all food and wine during the banquet and auction. The dress code is ‘superhero’ fancy dress (or mask and cape), a nod to the famous superheroes campaign staged by Fathers4Justice.