Luxe joins Peter and Tink on a Neverland adventure as panto season returns to the Sunderland Empire...

Peter Pan has flown over the Wear to the Sunderland Empire this season, for an all-singing, all-dancing panto spectacular for the whole family. Together with his cheeky fairy friend, Tinker Bell, they’re sprinkling festive cheer and creating magical moments across the region as they journey to an enchanting land with Wendy, Michael and John.

From their home in London, the three siblings follow the second star to the right and travel straight on till morning to a faraway place, a place of eternal childhood – Neverland. Confronted by acrobatic pirates, a sassy Tiger Lily, Captain Hook and his silly sidekick, Smee, will Peter Pan and his new team of ‘Lost Boys’ defeat the bad guys and return home?

The second star to the right is not only star in this production. It’s a star-studded show, packed with familiar faces from stage and screen. Soap star and last year’s I’m A Celebrity Get Me Out of Here runner-up, Jamie Lomas swaps Croc Creek for the Jolly Roger, as he takes on the role of Captain Hook. He’s a very convincing baddie, encouraging little ones to boo and hiss as he plots his next move, while he makes grown up chums chuckle with one-liners and bushtucker trials nods.

Richard McCourt, better known as one half of Dick and Dom, holds the whole show together as Captain Hook’s sidekick, Smee. He’s an absolute hoot and the jokes effortlessly roll off his tongue. His background in children’s TV goes down a treat, keeping the kids happy with silly slapstick and catchy tunes, while older audience members belly-laugh their way through the panto, thanks to his quick wit and cheeky innuendos. 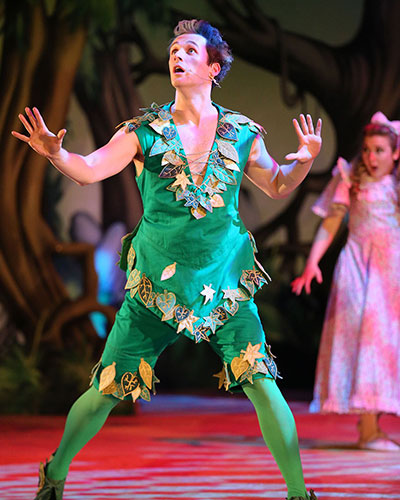 Gavin and Stacey fans will be taken back to Barry Island as Melanie Walters hits the stage. She doubles up as a very elegant Mrs Darling, and a mischievous Mermaid, who joins Peter’s journey in the Lagoon. Her fish jokes have the crowd in stitches and her dazzling dance number really gets the panto party going.

Josh Andrews is flying the flag as Peter Pan – fun, energetic and everyone’s best friend throughout. The lovely Lauren Ferreira is a pretty-as-a-picture Tinker Bell, sprinkling fairy dust as she skates her way around the stage. Local girl, Ruth Betteridge, plays a very sweet Wendy and Inez Mackenzie is the sassy, Scottish tribe leader, Tiger Lily. The three pirate’s played by William Beckerleg, Morgan Chambers and Alex Middlebrook are full of life, bringing heaps of fun and energy to the stage; and special mention goes to Peter Pan’s Lost Boys. Oh, and not forgetting Nana the Newfoundland – she’s sure to steel your heart.

What’s not to love? It’s a funny, fairy-filled, festive family adventure, spreading smiles and season’s greeting throughout the Sunderland Empire. Smee goes straight to the top of our Christmas card list this year – he’s a hoot! His enthusiasm and energy is infectious – little ones love the silliness, but grown-ups won’t leave disappointed either. The age-old jokes, cheeky one-liners and naughty panto innuendos will have you howling from start to finish.

Your imagination will run away with you this year. Expect a flight across London town, a giant crocodile, special effects that will blow you away and sparkling sets that will whisk you away to the Neverland you always dreamed of.

The kids will love this one. There’s plenty to keep them entertained – from chart-topping tunes and dazzling dance numbers, to punchy jokes and larger-than-life characters, it’s an all-rounder. Take the whole family and spread festive cheer at the Sunderland Empire this season.