Thinking of popping to the panto with the family over the festive break? Here are some of our favourite seasonal shows in the North East this year...

Peter Pan has flown over the Wear to the Sunderland Empire this season, for an all-singing, all-dancing panto spectacular for the whole family. Together with his cheeky fairy friend, Tinker Bell, they’re sprinkling festive cheer and creating magical moments across the region as they journey to an enchanting land with Wendy, Michael and John.

Expect a funny, fairy-filled, festive family adventure, spreading smiles and season’s greeting throughout the Sunderland Empire. Smee (Richard McCourt) goes straight to the top of our Christmas card list this year – he’s a hoot! His enthusiasm and energy is infectious – little ones love the silliness, but grown-ups won’t leave disappointed either. The age-old jokes, cheeky one-liners and naughty panto innuendos will have you howling from start to finish.

This year, the Tyne Theatre & Opera House and Enchanted Entertainment presents the classic family favourite, Cinderella – with a sparkling panto twist. It’s the most magical ball of them all as the larger-than-life cast come together for sparkles, silliness and the ultimate fairytale story.

With a star-studded line-up of Charlie Richmond, Maureen Nolan, Lola Saunders and Jamie Lambert, this show has everything – glittering costumes, sparkling sets, marvellous musical numbers and lovable characters who make returning to the panto an absolute joy. 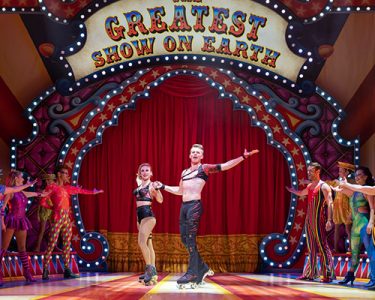 Is it even Christmas without a bit of panto fun at the Theatre Royal? Best-loved for its dazzling displays, sparkling costumes, giggle-worthy gags and most importantly, its local talent that has us bursting with pride year-in-year-out, there’s nothing that makes us smile more as we wander into the festivities. This year, audiences can expect mind-blowing circus acts, heaps of cheeky innuendos and Geordie jokes aplenty.

Our favourite father-and-son duo, Danny Adams and Clive Webb, return to the stage with more hilarious slapstick and high-energy sketches than ever before! They’re joined on stage by Chris Hayward as Dame Rita Rington, Steve Arnott as the best baddie in town (Baron Von Vinklebottom), Michael Potts as The Circus Idiot and the lovely Laura Evans is as Goldilocks.

Expect the glitziest costumes to date, thrilling circus acts that will leave you with so many questions, adorable animals and belly-laughing fun from start to finish.

Go to Darlington Hippodrome this Christmas for everything we know and love about fairytale favourite, Aladdin – but with a punny panto punch. Yes, there’s a wish-granting genie, flying carpets and a magic lamp – but there’s also a flamboyant fairy, glittering gowns and stacks of silly sketches.

Louie Spence is as sassy and as fabulous as ever, taking on The Spirit of the Ring role with a touch of twinkle as he hops, splits and pirouette across the stage. Last year’s returning stars include Zoe Birkett, Eric Potts, Liam Mellor and Robin Askwith. Liam Mellor is the star of the show this year, settling in to his silly character with ease. Wishee Washee keeps the kids entertained, but also makes his adult chums chuckle with cheeky innuendos and near-the-nuckle one-liners.

Delivering loads of local laughs, larger-than-life costumes and plenty of quick-wit, this is an absolute must for the whole family over the festive season.

Gather the gang and get down to the Gala Theatre in Durham for a panto adventure with Snow White and the Seven Dwarfs. Rupert Von Rottenchops (Neil Armstrong) rules the land and he’s about to blow the town to smithereens. Snow White (Lauren Waine), Chester the Jester (Paul Hartley) and Dame Dolly Doodle (Paul Dunn) have a plan to stop him, with the help of Will The Woodsman (Jacob Anderson), Miranda The Mirror (Sarah Boulter) and their seven little friends.

Will they defeat the evil Rottenchops? Find out this festive season at the Durham Gala. One the whole family will love.

We’re swapping Neverland for Whitley Bay this year as Peter Pan stops by for a highflying adventure over the festive period. With some familiar faces and plenty of panto fun thrown in for good measure, this show is sure to make the whole family smile.