Salmon is always a crowd-pleaser - especially for family gatherings and special events. This recipe for salmon en croute is a good one to have in your culinary armoury, says Terry Laybourne of Saltwater Fish Company. 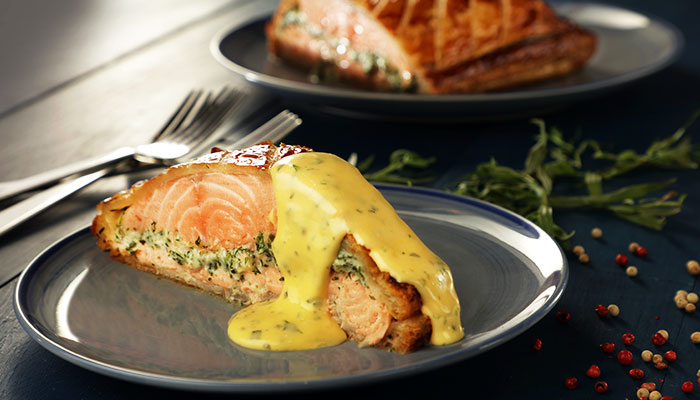 You can prepare it ahead and double up the quantities for bigger gatherings. It looks impressive served up and needs little more than potatoes and watercress salad served up alongside.

Sweat the spinach in a little butter for a couple of minutes in a small sauté pan.

It is essential to drain off any liquid.

Then chill for ten minutes in the fridge

Chop the spinach and place in a small mixing bowl, along with the dill, chives, shallots, horseradish, cream cheese and lemon juice. Stir to combine and check the seasoning.

Cut the salmon fillet in to two even pieces and season with salt and pepper.

Place the first piece of salmon onto a small tray then spread the cream cheese and herb mixture over before placing the second piece of salmon directly on top. Brush the top surface with melted butter and chill for 30 minutes.

Mix the egg yolk with a little water and use a pastry brush to coat one side of the pastry with the egg.

Place the salmon fillet in the middle of the eggy side, butter side down, fold the pastry to form a join on the side. Turn the Salmon over so that the buttered side of the fish is uppermost. Chill for 30 minutes. Cut a small hole in the pastry to allow steam to escape before cooking.

Bake for 25 or so minutes until golden brown and piping hot (a food temperature probe should read around 55oC). Allow to rest for five minutes or so before serving in slices.

A big watercress salad and some new potatoes are the only accompaniments you need.

Add a hollandaise sauce if you wish.