CHRISTMAS IN THE CITY: LEEDS

A short hop for long-lasting fun, Leeds is so easy to get to from the North East...

Try the central, newly-refurbished Mercure Leeds, which is a quick walk from the station and with easy access to the city centre. A cool spot with a welcoming vibe thanks to retro styling in the neat bar area which has plenty of mags and city guides to read. This is a great place to lay your head during Christmas party and shopping season.

For street food without the street weather during winter, Trinity Kitchen is more fun than a food court in a mall sounds like it’s going to be! Natty little independents serve the popular stuff such as noodles, pizza and fish and chips in an easy, buzzy environment.

For something daytime glitzy, be surprised at Gaucho in Park Row where its basement location makes a weekend lunch date  feel like a late night club with its beats-laden Electro Brunch. The place is really glam with glossy white booths, loads of mirrors and a definite sense of style.

Gaucho has recently launched its menu – remaining a destination for top-quality Argentinian steaks, while also drawing on contemporary, modern flavours and the vibrant culture of the wider Latin American region. The new menu is split into ‘classics’ and ‘nuevo’ sections, featuring dishes like Gaucho’s signature empanadas and homemade sausages alongside new additions like cured Patagonian red prawn tiradito – which are amazing. 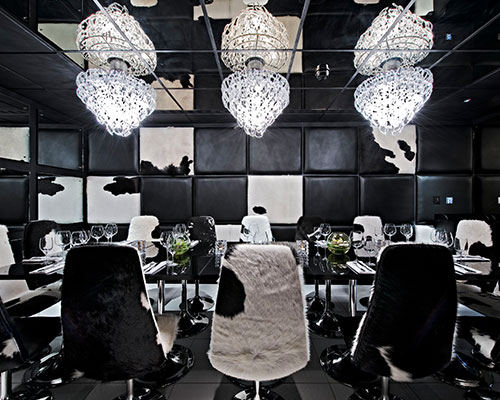 Select main course meats from a platter brought by your server as the different cuts are explained to you. There are feasting platters to share but we were impressed by the Tira de Ancho, a super succulent spiral cut beef served beautifully rare with a punchy chimichurri sauce alongside .

Or try a Michelin-starred menu from a local – chef Michael O’Hare’s acclaimed Man Behind the Curtain is a legendary experience.

If you love meat then Friends of Ham is a place to make friends with. The idea behind the bar is a simple yet unique one: artisan hams, charcuterie, cheese and posh bar snacks, served alongside a great range of draft and bottled craft beer.

There’s much to love about a top floor fizz at Harvey Nichols when you’re all shopped out at Christmas – or in the terrace area inside the Victoria Arcade – which is now also home to The Ivy. A cute and cosy space away from the cold.

Leeds is awash with cocktail bars, especially close to the station. Bibis Italianissimo is full of 20s style atmosphere and glam for a champagne cocktail.

The Reliance offers something a bit more low key cool. At heart an informal pub where you can pop in for a pint, a coffee or a read of the paper. Discover guest bitter and cider pumps which change regularly, showcasing the region’s amazing range of small independent breweries. Feast on bar snacks, including home cured charcuterie! This place is also home to The Little Reliance Cinema which has regular screenings hosted by Film Fringe.

Fresh air time at Roundhay Park on the outskirts of the city or make a detour to Harewood House for a peek at the setting for the Victoria TV drama.

If you love, er, armour, then Royal Armouries will set your soul on fire. So many swords, helmets and tales of battle… fascinating stuff.

Get a culture fix at the  impressively ornate Leeds Art Gallery, which is a beautiful building in itself. Its neighbour is the Henry Moore Institute, which celebrates the work of the famous sculptor.

Walk the canals – plenty of waterside charm for laid back wanderings which give a taste of the city’s industrial heritage.

Explore the gorgeous architecture of the Victorian shopping arcades in the Victoria Quarter and the historic Cornmill. Or there’s glamour to be had in the newest shopping quarter Victoria Gate with Neom, Cos, & Other Stories, The White Company and John Lewis to name but a few.

There’s an authentic market experience at the lively Kirkgate Market, part of which is a Grade I listed building dating from 1875. This is one of the largest covered markets in Europe and opens six days a week with over 400 stalls inside and a further 200 outside. 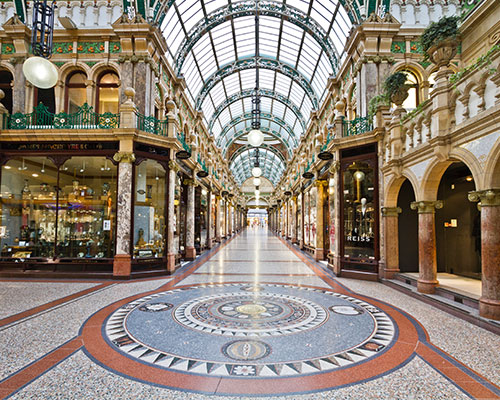 The building has been restored to its former glory and reopened under the name Belgrave Music Hall and Canteen with a hope that it will provide artists and performers with a unique new platform in one of the UK’s most creative cities. Spread over three floors it hosts live music, comedy, film and art exhibitions and serve fresh, canteen style food, amazing cask ales and frozen cocktails.