Do your bit for the Poppy Appeal with a palate-pleasing afternoon tea at The Ivy St Helen's Square in York.

The beautiful Ivy St Helen’s Square in York buzzes day and night, from breakfast and brunch, to lunch, afternoon tea and dinner. It’s a distinguished, quintessentially British spot in the centre of York’s St Helen’s Square, and it’s a great place to drink, dine and catch up with friends. 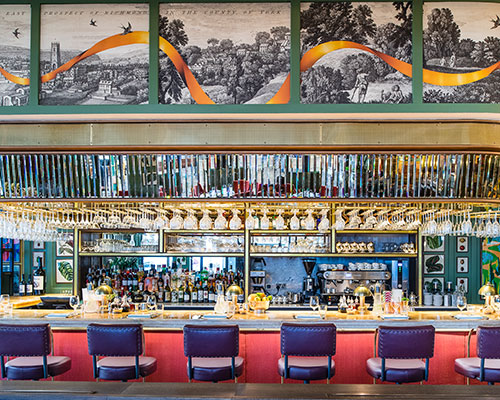 The Ivy St Helen’s Square has given a charitable donation to The Royal British Legion’s North and East Yorkshire branch and this is the start of ongoing activities to help raise awareness for the organisation in Yorkshire.

From Tuesday 6 to Wednesday 14 November, a striking installation outside The Ivy St Helen’s Square featuring over 2,000 poppies, will coincide with the restaurant’s Poppy Afternoon Tea offering.

The Ivy St Helen’s Square’s Poppy Afternoon Tea experience (priced at £18.95 and served daily from 3pm – 5pm), includes sweet and savoury treats such as – warm fruited scones with Dorset clotted cream and strawberry preserve, chocolate and salted caramel mousse and crème brûlée doughnut – and will also include The Ivy Poppy Pot, a beautiful finish to the Poppy Afternoon Tea.

The sweet delights will be served alongside savoury bites such as – truffled chicken brioche roll, marinated cucumber and dill finger sandwiches, smoked salmon on dark rye style bread with cream cheese and chives – ensuring guests are left feeling satisfied. For those wanting to celebrate a special occasion or simply add a touch of sparkle to their afternoon tea, The Ivy St Helen’s Square will also be offering a Champagne Afternoon Tea from £26.50.

A spokesperson for The Royal British Legion, said: “We are so thrilled that The Ivy St Helen’s Square, York, is supporting The Royal British Legion, especially in this historic, centenary year of the end of the First World War. This activity will help raise awareness of our work providing lifelong support for the Armed Forces community, especially within our nearby North & East Yorkshire branches.”