Ingredients spill from the kitchen garden to the stove top to create inspiring seasonal menus at Askham Hall in Cumbria. Kathryn Armstrong pays a visit. 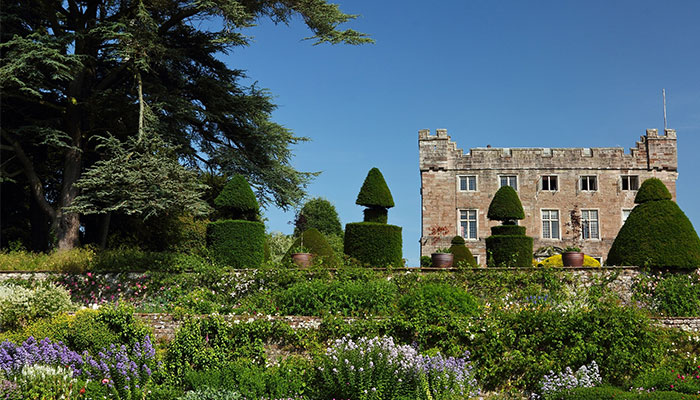 Chef Richard Swale and his kitchen team have a little piece of paradise on their doorstep from which to pluck, harvest and forage ingredients for their daily menus at Allium restaurant.

Its name alone brings the outside in and gives a sense of place, referencing as it does the beautiful purple allium flowers in abundance in Askham Hall’s gardens, but also the allium family that lays claim to the sister foodstuffs of garlic bulb and onion, mainstays of any kitchen. These are often the starting point for inspiring dishes that are gaining Richard growing acclaim as one of Cumbria’s most exciting chefs.

Askham Hall lies just a few miles from Ullswater, not far from the A66. It nestles in a perfect little hamlet with a charm all its own. The Hall’s reputation for great food, gracious grounds and an abundant kitchen garden has also led to the opening of their Kitchen Garden Café in one of the hall’s renovated barns. Just a couple of miles away is another member of the clan, the George and Dragon – an acclaimed gastro pub in the village of Clifton which also uses produce from Askham’s gardens.

Food, growing and gathering lie at the heart of Askham’s kitchens says Richard Swale. “Allium is all about celebrating the relationship between our wonderful ingredients and how they are interpreted by our senses. We are on a journey of discovery, re-establishing old growing and preserving techniques as well as using modern cooking techniques to enhance flavour combinations”, he says.

“My culinary identity is inspired by people I have learned from who do this and I have adapted this knowledge to create a cuisine rich in intuitive flavour combinations, texture and colour for people to enjoy.”

Richard grew up in this area of Cumbria understanding the seasons, wild foods and produce from a childhood spent out shooting in the woods, fishing on the river Eden and looking after his own rare breed chickens, which he brings to Askham Hall.

Having developed a passion for cooking at a young age he has spent the last 12 years working away from the area honing his skills and developing his cooking style.

He spent four years working with renowned chefs John Burton Race and Anthony Demetre in London. He also spent two years in France and had various stages around the world including NOMA in Copenhagen and with the famous 3 Michelin star French chef Marc Veyrat in Annecy who specialises in mountain plants and herbs.

Since then he has gone on to refine his style in his five years at Askham, very much rediscovering his connection with the ingredients he grew up with.

He has an exciting food playground since the gardens have been extended to grow dwarf fruit trees such as morello cherry, plum, damson and peach, as well as more exotic fruits, such as Japanese wine berries. ‘Hotbeds’ burst with veggie delights such as beetroot, radishes, carrots, rhubarb and leeks, to name just a few, and lunches served in the Kitchen Garden Café are prepared with produce straight from the land. The wider grounds offer foraging heaven with wild garlic, nettles and abundant herbs and plants.

Menus are very much in tune with the landscape and the surrounding Eden Valley, with ingredients including Askham home-reared chicken and Rough Fell lamb, the famous Goosenargh duck and of course, the coastal catch and delicacies such as west coast shrimps.

Allium’s launch coincides with the creation of three new guest bedrooms in what was originally Askham Hall’s old stable block. The history of the building is immense, and the rooms include original leather tack once owned by the 5th Earl of Lonsdale – best known as ‘The Yellow Earl’ – to make each one truly unique. The latest additions are called ‘the Stable’, ‘the Tack room’ and ‘Train room’, which once was home to the Earl of Lonsdale’s extensive train collection. It brings the total number of bedrooms at Askham Hall to 18.

The hotel itself blends the ancient and modern in a style that sees vast modern light fittings cast their light over furnishings that have a history all their own. The owner’s modern art looks striking on the strong aged walls and there’s a cool, ‘worn-round-the-edges’ charm that makes it a very restful place to stay put.

Dinner at Allium offers up a seasonal feast at every turn with plates that deliver morsels that go from intricate to perfectly simple. 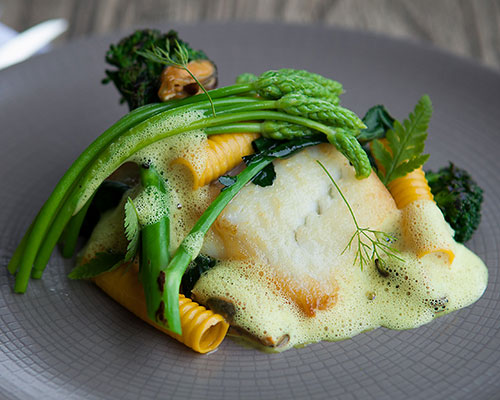 Take the textural variety of a starter of scallop tartare. Shredded and seasoned scallop flesh on a base of earthy salt baked beetroot and topped with a crispy battered mussel. As light as this was, it contrasted with the depth of rich flavours of an opposing starter of maple and coffee glazed quail. The soft-fleshed meat on the bone was rich and sticky and alongside a wee bon-bon of confit leg meat. Packing a zesty punch on this plate was pickled celeriac and then the piquant side pleasures of berryish fennel and blackcurrant ketchup.

A real standout dish was roasted john dory, a silvery luscious piece of fish which had seasonal character by the trug-load. Presented with a mound of mixed grain risotto then garden-fresh fronds of wild garlic and seaweed tumbling over – with  sweet nuggets of brown shrimps adding some nippy seafood texture.

Dishes were served on plates and dishes made by the village potter adding a unique touch to the airy dining experience in the garden-facing room with its lovely Moorish-inspired tiled floor.

Another main of spiced salt-aged Goosnargh duck breast arrived on a stunning grey plate and looked like a work of art. The gently pink and so-tender duck with a slight crisped edge was teamed with treats from that kitchen garden; a tiny turnip softly caramelised, and charred spring onion. Pickled green strawberries were new to me but their sharpness a good foil to the richness and texture of the duck. Also on the plate was a ‘duck fat waffle’ which was as appealingly indulgent as it sounds, half sweet, half savoury and melt-in-the-mouth moreish.

A word about the wine list at Askham. It is blindingly impressive brought to you by Nico Chieze. Loire Valley born, he is Askham’s beautifully welcoming ‘house manager’ and his knowledge of food and wine are impeccable.

Meanwhile, desserts bring us back into the garden. In this case a gorgeously refreshing combination of just-plucked fruits. A light geranium set cream accompanied perky Yorkshire rhubarb and a so-refreshing granita made from Campari and blood orange. As someone who normally eschews desserts, this made me a convert.

My chum is a hardcore dessert fan and loved (and ultimately, lost) the challenge of rich bitter chocolate, cardamom milk sorbet and a sesame crisp.

Food lovers and foragers alike will love this place – stay over and you can spend the day pottering in the kitchen garden and stocking up on more treats to take home!