THE BUZZ OF BEEKEEPING

Jessica Laing chats with North East bee fanatic, Jilly Halliday, about the art of beekeeping and how the region’s kids can help save our furry winged friends.

Never underestimate the power of a mid-life crisis. Yes, it can make you feel like throwing up your hands and surrendering to a life of giant knickers, anti-wrinkle cream and copious amounts of red wine, but it can also inspire you to treat your life to a little makeover, nudging you in new directions and pushing you to pursue buried dreams.

At least that was the case for Jilly Halliday who, four years ago, decided to up and leave the world of floristry in favour of homemade hives and honeycomb. Becoming a fully-fledged beekeeper has been a life-long ambition, she tells me, but it wasn’t until her eldest – her “first baby” – transformed into a teenager and her 50th birthday came knocking that she finally decided to make the jump.

“I had reached a point in my life when I thought to myself, if I don’t do it now, I probably never will,” she says, affectionately gazing down at the bee-encrusted necklace around her neck. “Suddenly, my daughter was old enough to babysit my youngest and so off I went!”

Jilly embarked on a ten-week beekeeping course at Kirkley Hall’s Agricultural College where, in the company of specially-trained bee boffins and fellow beginners, she was introduced to the fascinating world of bees through a range of lectures, demonstrations and fun practicals.

“It was such a great experience,” she enthuses. “You’re assigned your very own mentor – in my case it was a wonderful guy called Dr Dorian Pritchard – who basically shows you how to get started should you be lucky enough to bag yourself your own swarm. You’re given tons of support and the course is just magical – I’d recommend it to anyone.”

Today, Jilly can be found tending to her very own honey bee colonies – eight to be exact – which take pride of place in the back garden of her idyllic Stocksfield cottage. She knows and loves each colony individually – so much so that she’s become quite the pro at spotting their differing personalities and features. I find it remarkable.

“I like to think of mine as a friendly bunch – and they’re all pretty local too,” she tells me. “I like to keep bees that are as native to the North East as possible. Black bees – or ‘Geordie bees’ as they’re often called – are easier to keep. You’ll find them up in the borders and they’re a lot gentler than your typical stripy, ginger bee, so I like to use them when breeding. They’re a calming influence – I don’t like bees that swarm.”

I see these calm and collected pollinators in action when Jilly somehow manages to dress me up in a head-to-toe bee suit later that afternoon. Sporting a pair of oversized wellies and looking like a cross between an extra from Ghostbusters and a somewhat awkward astronaut, I’m persuaded to peruse the hives with Jilly as my guide. We crack a few open to see how they’re doing.

“Any devoted beekeeper will tell you how fascinating these creatures are – they all have their own jobs and purposes,” she explains, pointing out the key players. “For example, you’ll see that the older bees will guard the hive, while the females get to work – they’re the busy bees. The fuzzy males, meanwhile, which have big eyes and no sting, are mainly there to mate with the queen – a hard life, I know!”

For those new to beekeeping – or too terrified to try it – I’ll tell you that the experience is nowhere near as hair-raising as I feared. I may be, quite literally, knee-deep in bees, but thanks to Jilly’s sprightly attitude and soothing, school teacher-like instruction, I soon feel like a pro.

I help ‘smoke’ out the hives (this helps calm the bees while we inspect their immaculate homes) and find relaxation in the humming that surrounds me, despite my back jerking every time one of the little blighters flies past my ear.

Jilly isn’t the only one to be stung by this sweet craze. The North East’s beekeeping community is thriving; more and more research into the science of the creatures and the effects of chemical nasties, such as pesticides, is taking place right under our noses in the labs of Newcastle University, and Jilly tells me that many of her closest mates have now taken up the hobby.

A few of these friends stop by during my visit to her cottage. I watch as they nosey around her hives, swapping bee stories and congratulating each other on their recent buzzy triumphs (one of them has made the front page of the local paper) as they go, as well as filling each other in on the latest news from The Broomley Bee Project – of which Jilly is a member.

Founded in 2014 and run by a committee of passionate volunteers, the small charity is devoted to promoting the delights of beekeeping, as well as educating children and their families about the importance of bees in the environment.

Jilly and co work closely with staff at Broomley First School in Stocksfield (the headteacher is now a fully-fledged beekeeper, thanks to the charity’s sponsorship), to help give its pupils a true ‘bee education’ through fun activities and interactive workshops in and outside of the classroom.

Things like arts and craft days, raffles and coffee mornings, bee-themed non-uniform days, the creation of a fully-functioning (and rather beautiful) Bee Garden and the hugely successful Bee Festival, which takes place at National Trust’s nearby Cherryburn Cottage.

“The Broomley Bee Project is my passion,” says Jilly, her face beaming. “Engaging young people about bees – and why we must come together to take care of them – is so important. The aim is to try to weave the art of beekeeping, and the science of bees, into the school curriculum so that the kids are constantly learning. Knowledge is power, after all.”

“We’re a self-sustaining charity in that we fundraise and apply for charitable grants in order to finance the running of our black bee colonies – two of which are at Cherryburn – and the work we do at Broomley. We’re also lucky enough to be supported by many local beekeepers and organisations who are always on hand when we need expert help and advice!” 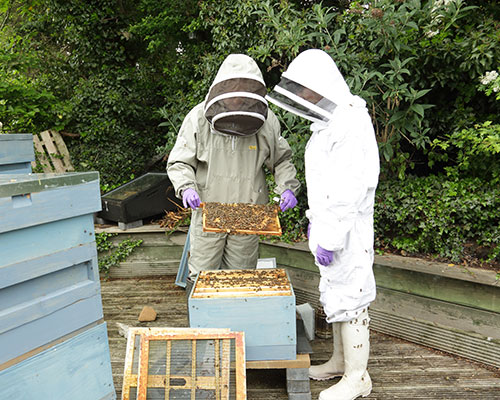 So what does the future hold for Jilly and her fuzzy friends? “To keep going! Beekeeping is so much more than a hobby,” she enthuses. “You have to be dedicated and willing to face up to all the failures that come along with it. You’re up against so much here in the UK, with our wet climate and environment, and when you lose bees you really do feel the grief.

“But it’s up to us to keep these beautiful creatures safe. The best thing the public can do is plant all year round, stop spraying chemicals and embrace their dandelions – the bees love them! And to anyone afraid of bees, I’d say get yourselves suited up and get stuck in – give it ten minutes in a pair of overalls and you’ll feel invincible.”

And with that, I’m off for some more suit action. Conquering your fears really is the bees’ knees.