As chairman of the iconic Cleveland Tontine hotel, Chris Blundell plans a hands-on approach that includes food on the plate from his own kitchen garden. Kathryn Armstrong met him.

Chris Blundell has long had an affinity with soil. From days getting grubby in the gardens as all small boys do, to overseeing one of North Yorkshire’s most impressive gardens.

From breeding prime cattle and grouse to subtly shaping the nation’s food habits in his former role as a director of supermarket Morrisons, a business started by his uncle, Sir Ken Morrison.

He knows food, he knows farming and, in a role as trustee with the Royal Horticultural Society, he knows growing.

At his home, Mount St John, near Thirsk, Chris has created one of North Yorkshire’s finest formal gardens with uninterrupted views for 50 miles.

And it is also where Chris oversees a remarkable garden that feeds the kitchens of the hotel group of which he is chairman – Provenance Inns.

Chris and then business partner Michael Ibbotson bought the well-known Cleveland Tontine Inn, which perches by the A19 near Stokesley and Northallerton, in 2016.

It became the ninth acquisition for the pub and hotel group, which also owns the West Park Hotel in Harrogate, the Carpenters Arms at Felixkirk and the Black Bull at Moulton near Darlington as well as The Punch Bowl Inn, Marton-cum-Grafton and The Durham Ox, Crayke.

The Cleveland Tontine is an exciting project admits Chris: “We have lots of plans – there are opportunities to extend and create more bedrooms – we would like to have 20-plus. The building overlooks the hills and is a fine setting and there is already permission granted for some of the expansion. 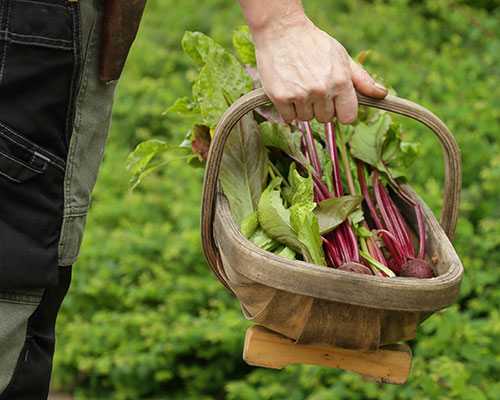 “It is a fantastic building with lots of interesting spaces within. There is the iconic bistro of course and lots of scope for private dining and events.

“Good food is at its heart and our business, as the name suggests, is all about provenance; where we source food is important.”

Chris is the perfect man at the helm of such things. He bought his home, the Mount St John estate, some 18 years ago and set to work on revitalising its kitchen garden.

The first customer was The Star at Harome and Michelin-starred chef Andrew Pern. “We’d head up there if we had a glut of produce from the garden for them to sell in their shop”, he says.

Chris has had a long involvement with the food industry with both Heinz and Morrisons (on the marketing side). At the time he was there, Morrisons was the country’s fourth biggest food retailer and second largest food manufacturer.

“I always wanted to get involved in the hospitality side of things – there is an obvious transference of skills from a multi-outlet operation, be that in property acquisition or food production.

“I had been director of wines and spirits with Morrisons too, so we put that into practise in Provenance with good wines by the glass as well as our focus on well-sourced food.”

In the Mount St John vegetable garden we catch up with kitchen gardener, Fiona Slight who is tending the polytunnels, encouraging the cut flowers and nurturing her micro-herbs.

She explains: “We call the chefs at our restaurants on a Monday and let them know what will be ready for them later in the week so they can tweak their menus.

“We supply the Carpenter’s Arms with all their rhubarb and of course, the autumn apples are always in great demand”, she says.

A rainbow of salad leaves and micro herbs are shimmering in the day’s sunshine and there’s excitement over a cucamelon, which tastes like a cucumber but looks like a watermelon, used for garnish in salads.

In the glasshouses, figs and apricots are weaving their way along Victorian brick walls waiting for a late-summer harvest.

“Our game will certainly be on the menu at The Tontine”, says Chris.

Mount St John Sporting, through Yorkshire Game also supply the Provenance Inns hotels and pubs with their venison, grouse, partridge and other game from the shotting estates nearby.

Game is provided to Marks and Spencer and the estate also has an Aberdeen Angus beef suckler herd providing beef for Waitrose, together with a sheep enterprise.

Chris’ accumulation of a lifetime of knowledge – in and around soil on every level – means the message is a heartfelt one reflected within the group’s businesses but also proudly demonstrated on the plate.

“The provenance of food and where we source it is very important and we actually practise it in the business and will bring that to the Tontine”, says Chris. “The Cleveland Tontine has an excellent reputation over a number of years and we are delighted to to build upon this. We will be underpinning its standing as a fine-dining establishment by offering our own seasonal and locally-sourced produce and we are committed to delivering the best possible experience.”