MY OWN PRIVATE ISLAND….WELL ALMOST

When the Constance Ephelia opens in the Seychelles this spring, it will introduce to the islands a prime example of one of the most flourishing trends in the hospitality industry: the upmarket island resort. Indeed, if the word resort has, for the last two decades, conjured ideas of raucous pool parties and all-you-can-drink bars overflowing with cheap booze, the 296 acres over which Ephelia is spread are grounds for a new breed: consider, rather, its 7,000sqm of tropical gardens, its four swimming pools and yoga pavilion, its tennis and squash courts.

This is more the kind of fantasy island life envisaged by the 1980s TV series of the same name, in which Mr Roake and Tattoo invited guests into a secret world of luxury, rather than that suggested by Club 18-30.

Nor is Ephelia alone. Take, for example, the Southern Cross Club on Little Cayman, among the Cayman Islands. With the island largely undeveloped, guests occupy one of just 12 beach-front cottages. Indeed, the whole island has a population of just 130, offering the ultimate privacy and exclusivity.

Of course, you could go one better: the new Naiade Diva Resort in the Maldives is situated on a 25 acre private island accessible only by seaplane from the Male Atoll. Similarly, Peter Island Resort, on Peter Island, amid the British Virgin Islands, offers maximum relaxation thanks to the local salt mineral crystals, marine algae and botanicals making its spa a world-leader. It also helps ease the strain knowing staff outnumber the guests. Those with deep enough pockets can hire the entire 1,800 acre resort for their own use.

Certainly, the new super-resort is a product of the times. With a growing clientele of time-poor, overly-stressed, cash-rich but also increasingly value-conscious holiday-makers, these spots seek to offer all the undoubted benefits of the traditional resort but at a more refined level: exclusive, elusive, remote, relaxed, self-contained and, more often, all under one bill or bundled package (such that pioneering all-inclusives the likes of the Grand Velas and the Royal Hideaway Playacar, both in Mexico, can now even achieve covetable AAA Five Diamond Awards).

If the hospitality industry used to drive the resort model primarily towards the middle and lower ends of the travel market – since it allowed easy budgeting and guarantees of certain facilities – now it is being targeted at the top. Small wonder then perhaps that recent years have even seen the hospitality industry giants that created the resort market – the likes of Club Med, AMResorts, the company behind such names as Dreams and Secrets, and Sandals Resorts, arguably the company that started it all in Jamaica during the mid-1980s – undergoing their own programmes of re-branding and upscaling. 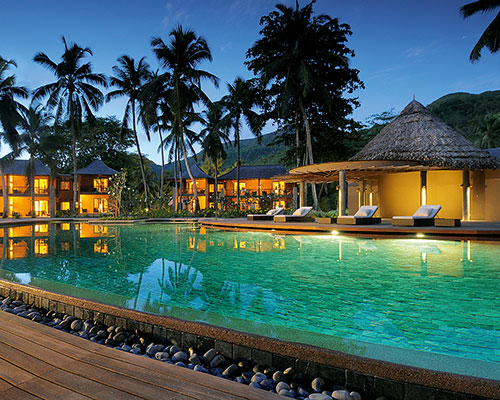 “It’s not just a response to the downturn, but a new attitude that has been building for the last few years: the wealthy are increasingly after packages in which they may pay a lot up front but then don’t have to carry their wallet with them. They don’t have to think about anything,” argues Achille Pastor, CEO of Canouan Resort Development, the holding company behind the Grenadines Estate on the Canouan Island. Here, in a first move by the Raffles hotel brand into managing a resort, guests can find one of the Caribbean’s few championship-grade golf courses edged by custom-designed villas spread over 700 acres – travelled by personal golf cart (even, in order to achieve five star rating, with valet parking).

“People work harder now too, and communications technology follows them everywhere, all of the time, so equally the need to relax is that much more intense,” Pastor adds. “Luxury resorts – with their ability to meet guest demands on one site, as well as provide safety, which can also be a concern for the very wealthy – are meeting that need.”

With switching off in style and comfort the priority, certainly it is no coincidence that such resorts tend to be coastal and their amenities – spas, golf courses, fine dining, water sports – skewed towards a gentler pace of life. If mass-market resorts typically closed for the down season (often when the weather was less than picture postcard), the luxury version tends to be open all year round – because some guests prefer to visit precisely when occupancy rates are at their lowest. Vietnam’s new Ninh Van Bay resort, for example, even has a policy called Slow Life, through which staff are encouraged to move about without rushing and avoid using cellphones in guest areas. Such details suggest that guests are not simply seeking the unabashed hedonism promised by the more mass-market model, but with a better class of whisky or massage.

“While elements of the old, mass-market ‘Club Med’-style model of resorts remains – chiefly that guests have a good idea what they’re in for – the resort image is moving on and the luxury version has to be much more refined and experiential,” argues Ninh Van Bay’s general manager Godfrey Vas. The now out-dated vision for resorts, for example, treated guests as a captive audience closed off from, rather than integrated into, the local community. In contrast, luxury resorts tend not only to be symbiotic with the local economy, and so encourage interaction, but are more likely to be staffed by locals. Environmental awareness is also a characteristic indicative of the resort’s newfound upmarket status: at Ninh Van Bay, for example, no plastic in us and the likes of fois gras, caviar and shark’s fin are all deliberately absent from the menus.

“We’ve seen the one-stop shop resort concept work. The difference now is that people have become more discerning,” as Adrian Burley, UK sales and marketing manager for Constance Hotels, the company behind the Ephelia, has it. “Wealthy guests now want all the facilities but with certain levels of comfort, and without any timetable. Certainly the sites available for this new kind of resort offering around the world are limited. But it’s a concept with a future.