Morpeth is market town made merry. Be as country as you like safe in the knowledge that your urban needs can be satisfied just 14 miles away in Newcastle. 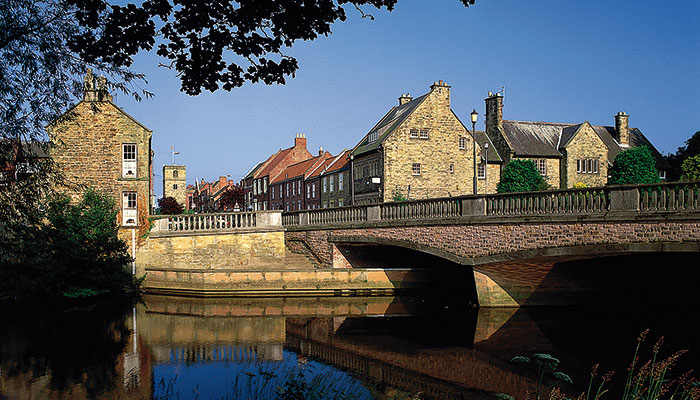 An ancient market town situated in the loop of the river Wansbeck. Some 14 miles north of the city of Newcastle and approximately 12 miles west from the sea at Cambois.

A bit of everything. Some ‘burbs, some impressive 30s detached and semis near the golf club. Characterful older terraces and always the option of a riverside apartment these days. Stone cottages and larger properties mean you can get lashings of character – and sought after because they’re in walking distance of the town’s ameneties. On the outskirts and in small villages round about find some spectacularly blingy  new-build mansions, trendy barn conversions and sturdy, no-nonsense period properties.

That’s the good bit. Hop on a train to Edinburgh or Newcastle from Morpeth station on the east coast line, roughly hourly. The A1 is right by too making it easy to hit Newcastle in 15-20 minutes.

One of the charms of ‘Peth is local shops and markets. Among them independent department store Rutherfords in the high street and Su Heart, handmade jewellery on the high street. The Sanderson Arcade is impressive with a Fat Face and Laura Ashley as well as a great flower shop and a well-used M&S.

Foodies are well satisfied here. There’s a market every Wednesday with a great selection of stalls from local suppliers and the first Saturday of the month a certified Farmer’s Market in town square opposite the clock tower.

Other favourites, Morpeth Cheese Shop by the clock tower and Morpeth Deli.

Morpeth Castle was built of timber in 1095 and later destroyed. In the 12th century the castle was transferred to its present site. All that remains today is the gatehouse, which has been restored by the Landmark Trust and now used as a holiday home. There are several landmarks in Morpeth town centre, the most notable being the Town Hall, which was erected in 1869-70 from the plans of architect R Johnson an exact replica of Sir John Vanbrugh’s original. The clock tower, which stands nearby at the entrance to Oldgate, is a rare example of a freestanding bell tower. Originally built as a jail, the tower contains a clock which is reputed to be a very old one bought from Bothal Castle. The curfew bell still sounds at 8 o’clock each evening. Another prominent landmark in Morpeth is the Court House, which was designed by John Dobson and was built in 1820-28, now an apartment block and fitness centre.

Morpeth boasts many riverside walks which link to Carlisle Park. The town has won Britain In Bloom a couple of times and it’s easy to see why. Even in autumn and winter the riverside and herb garden areas are lovely.

Dr Nicky Asbury is a consultant clinical psychologist. She lives in Morpeth with husband Dr Mark Welfare and sons Jake, Issac and Lucas.

An in the know secret >>

You can walk through the park on a summer evening and take your dog into The Joiners Arms with you. While you enjoy local real ale, the dog will be fussed over and given a dog chew! Or Morpeth Rugby Club firework display. An annual bonanza.