More relaxed than St Tropez and a bit of a dazzling hip destination for you and your yacht. The Greek island of Mykonos has gone deliciously upmarket discovers Chris Porter 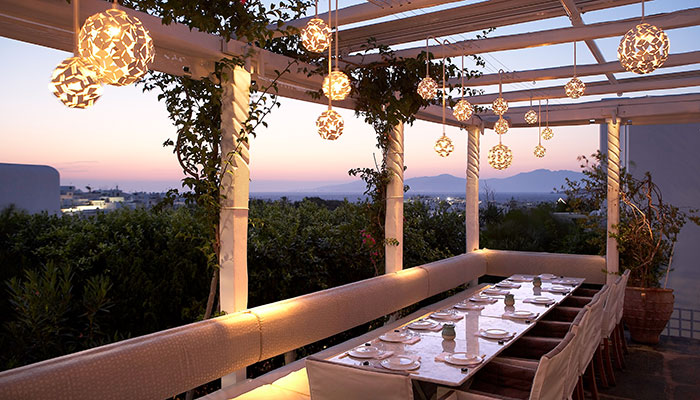 Having your hotel assembled by a super group – the hospitality world’s answer to Cream or Band Aid – is not automatically a recipe for success, Nikolas Iannidis assures, especially if yours is a niche operation: “Having big names attached is a draw to the hotel of course, and puts it on the map, but then you have to be careful that your infrastructure can handle the response.” Fortunately, for the newly-overhauled Hotel Belvedere Mykonos, that has not been a problem: the hotel remains exclusive and is becoming a hub for artists, designers and entrepreneurs looking to share ideas under the sun.

And that is despite the size of the names attached: the design is by New York-based architect David Rockwell, who created the W Hotel concept for Starwood; the uniforms are designed by ex-Prada hotshot and Milan maestro in his own right Neil Barrett; the signature cocktails have been created by ‘mixologist’ Dale de Groff, who can lay claim to inventing the Cosmopolitan; and the food is courtesy of both acclaimed Australian chef George Calombaris and Nobu Matsuhisa, the man who reinvented Japanese cuisine for the west and who has opened a new restaurant – the island’s first Japanese restaurant, Matsuhisa Restaurant by Nobu – in the hotel. That is some team.

“If you try to work with people you think are the best and it happens it not only gives you great quality work but opens up a whole network that only makes your project all the more exciting,” explains Iannidis, whose family hospitality company owns various hotels in Mykonos. “You work with David Rockwell, for example, and suddenly he’s introducing you to a highly-respected lighting designer. Deals lead to other deals.” 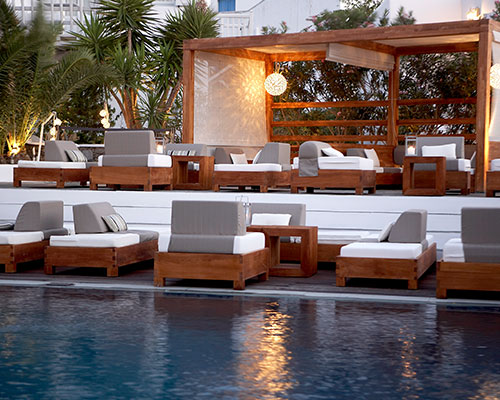 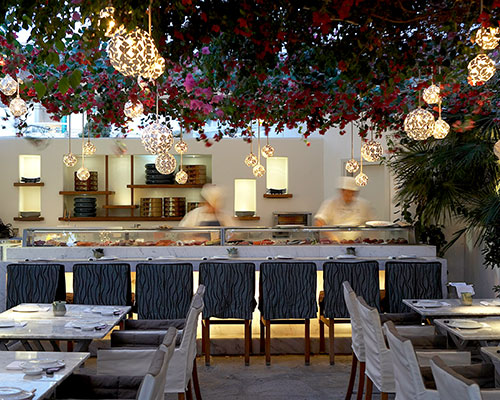 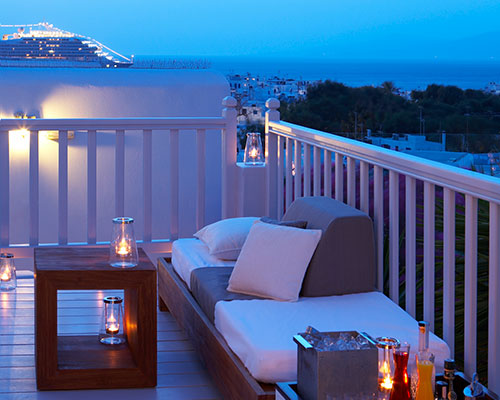 That Iannidis and his two siblings, who also work for the company, have been able to pull this roster of talent together is all the more surprising given the scale of the project: the Belvedere only has 43 rooms, putting it on the small side for a luxury hotel.

But they are memorable ones: their design emphasises the Mediterranean for colours and textures, with, for example, a classic room all washed wooden beam ceilings, white-on-white tones, dark wood furniture, access to private patios or balconies, with all the hi-tech lighting and entertainment systems hidden away. The hotel itself follows a formula – “a playground but without any loud music, setting itself up as the new hub to the town, taking energy from the town but also feeding it back,” as Iannidis puts it – that the family firm is building into a new hotel concept aiming to roll out to some five to ten other city sites around the world from 2013.

All of which still begs the question: whether Mykonos has shrugged off the package holiday party reputation that has blighted many Mediterranean islands in the eyes of holiday-makers seeking more sophisticated fare (Ibiza being the worst hit for this). According to Iannidis, it has, with Greece’s crisis-hit economy actually helping matters, encouraging the hospitality industry there to begin a process of sharpening up its act and stressing value for money – as opposed to the merely cheap and cheerful. Iannidis would even go further.

“People used to go to St.Tropez and now they go to Mykonos, which they find more more elegant than they might have imagined it to be,” he says. “It’s more relaxed than St.Tropez, more original and, if I can say this, not tacky as St.Tropez has become. There’s a huge variety of beaches here and a growing restaurant scene. Judging by the number of private jets at the airport and the mega-yachts off the coast, I’d say that Mykonos has gone upmarket.”