You’ve all heard of the ‘glitz of St Moritz’ but there so much more to this part of Switzerland, explains Rob Rees

Switzerland’s gloriously up-market ski resorts – such as St Moritz, Klosters and Davos – are truly iconic Alpine names for Brits, but never kid yourself that they are the whole story. Because those crafty Swiss have been keeping a few secrets to themselves.

The Swiss turn their backs on St Moritz, preferring other parts of the Upper and Lower Engadine: and less than a third of the town’s visitors are locals. But just like Rodeo Drive in LA or Monte Carlo, it’s good to see St Moritz once… but it’s a relief to get away and tick it off the ‘must ski’ list. Why? In my book, St Moritz sticks out like a sore thumb and there is so much more to Graubünden, Switzerland’s largest canton.

Graubünden, covers the entire southeast and despite the intrusion of St Moritz, it is the least populated but the most culturally diverse area in Switzerland. It is not well known, bordering Liechtenstein and Austria to the north, and Italy to the east and south. Isolated villages, imposing summits like Piz Bernina and dense forests combine to create a wild enclave, well worth making the effort to reach. Two of Europe’s great rivers – the Rhine and the Inn –are born on its icy glaciers.

You instantly feel you’re worlds away from that stiff Switzerland you experience whenever you arrive in Zurich, just two and a half hours by train to the north. We went ‘green’ for the week and benefitted from legendary ‘Teutonic precision’ and a seamless integrated transport system of linked timetables for yellow and orange Postbuses and the Rhaetian Railway, the largest narrow-gauge railway network in Switzerland.

The gem of the canton is the Engadine valley, running 100km along the southern flank of the Alps, with sunshine on average a mere 300 days a year, allegedly. This is also the heartland of Romansh culture, fiercely independent and not really Swiss at all. I was lucky to live in Switzerland in the 1990’s and my colleagues consistently raved about this area. Graubünden is officially trilingual; called Grigioni in Italian or Grischun in Romansh. Romansh is a direct descendant of Latin which has survived in these remote mountains, pretty much unscathed, since the Roman legions departed 1500 years ago from their garrison in nearby Chur, the cantonal capital.

St Moritz has been the winter retreat of the rich and famous for over a hundred years but it is not particularly welcoming or graceful. The town is divided into two disparate outposts: Dorf, with most of the luxury hotels and glitzy shopping, and Bad, the original spa, a mish-mash of boxy high-rise apartments on the valley floor, looking like they’ve been plonked down rather unceremoniously amidst the rawness of the lakes and peaks. Grand 5 star hotels, run in that earnest Victorian manner, are the norm. It is not that easy to ‘kick back’ or soak up much authentic culture either. Yes sampling the Bundnernusstorte in Café Hauser is worth it and grabbing a polenta carbo-lunch in the Alpetta hut on Corvatsch, amidst the smoke & ancient beams, warms the cockles of my heart. But St Moritz is bloated and on-edge. The resort, the fine mountain huts, the starchy service, the uniformed flunkies to carry your skis everywhere; they’re all rather brazen.

Its 260km of ski-slopes are good enough but – compared with say relatively unknown Samnaun or Lenzerheide – they’re generally undemanding, with a few long valley runs off Corviglia and Corvatsch. The tough skiing is on Diavolezza well beyond the main town, past Pontresina. Russian, English, Italian, German are the languages on the lift signs and grim-faced ‘new money’ now descends en masse, via private jets and the Engiadina airport in Samedan. Beware – Russians predominate in certain weeks, racing around Corviglia in their showy ski suits, notching 120kg and 100 kmph, wildly out of order and often out of control. It’s got the crusty English nobility and the public school boys of the Cresta Run frothing into their Kummel.

Moneybags Inc is this generation’s ticket to join the fur coats, celebs, oligarchs and entrepreneurs in St Moritz’s endless rounds of power networking. All-night partying, designer celebrations and in-your-face ‘sporty socials’ on and around the frozen Lej da San Murezzan lake keep the winter wheels oiled. But the much documented horse racing, polo and cricket on ice are all too earnest for me and are sideshows of little interest to true ski junkies.

If you seek alpine charm, and tire of ‘air kissing’, you’re better off staying down the valley near Sils, Silvaplana or Maloja or getting further even out of the main town. The Upper Engadin, of which St Moritz is in the centre, has many delightful villages so try Bever, La Punt Chamues-ch, Madulain and S-chanf. You immediately feel back in the real world of Romansh words, place names, styles and architecture. However, give it its dues. St Moritz’s one saving grace is that it is easy to get away from and is a good place to onboard some of the most scenic trains in the world such as the Glacier Express or Bernina Express!

And it is sledging heaven. Take the hourly service with the Rhaetian Railway to Preda (from St. Moritz approx. 25 minutes, www.rhb.com for timetable). During the final stretch, the train passes sleepy villages and uses a Victorian engineering masterpiece of stone viaducts, bridges and three spiral tunnels to overcome the difference in altitude. The Albula Pass is closed in winter but for over 100 years, the Preda-Bergün has been the Engadine’s classic sledging run, descending 5 km and 400m vertical of the Albula pass from Preda. It was set up by a load of foppish, restless pleasure-seekers; wealthy wintering Brits bored with afternoon tea and ballroom dancing. Sledges can be hired from the railway stationmaster at Preda and the route is floodlit until 11.30pm. The second part of the run is simply stunning, whizzing under viaducts and gawking at the bridges and trains passing over them. After 30-minutes of exhiliration in the cold night air, my teenage son Charlie and I dragged the toboggans through Bergün’s narrow streets, where it is easy to be tempted by the bars and restaurants on the way to the railway station
for the ride back to the top. One more run and a welcome bowl of soup and hard earned beer was devoured in the delightful Hotel Weisses Kreuz in Dorfplatz, before catching the very last train back to St Moritz at 22.17 precisely.

Beyond the Upper Engadine, in the very farthest corner of Switzerland – and requiring real dedication to reach by the interconnecting Postbuses – is the Lower Engadine (Engiadina Bassa in Romansh). Scuol is the main town and nearby Zernez serves as the gateway to explore the sole Swiss National Park. The succession of hamlets clinging to the banks of the foaming River Inn show their Latin origins as much as do the signposts: thick-walled houses stuccoed in cream, with small, deep-set windows and scarlet geraniums sprouting from every windowbox, reminiscent of Mediterranean village architecture found much further south. The Engadinerhaus or Chesa Engadina is everywhere; you’ll see the characteristic sgraffiti decoration – ornate, curlicued designs, pictures and even mottoes or dedications labouriously etched into the white stuccoed facade of a house to reveal a darker, coloured layer beneath. The lovingly decorated cottages and quaint cobbled squares, set against the tremendous dark pine forests and towering mountains, combine to give a uniquely romantic air. 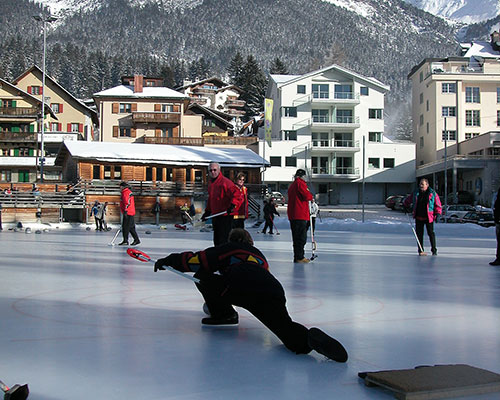 Here there is a much more modest take on Graubünden’s skiing. Samnaun is one of the best resorts, hidden up its own one-way road, which we reached by 3 seamless interconnections, via Scuol and Martina. It is tax-free heaven as a result of being granted ‘Zoll Frei’ status due to its isolated position (and now awash with smart Swiss watches, sunglasses & cheap schapps), but more importantly it hooks you straight into the 235km linked Silvretta Arena ski area without the lift queues and the late night revelers of Ischgl, just across the hills in Austria. Samnaun is quiet and perfect for groups or couples wanting to hole up high away from the hustle and bustle of the big resorts and could not be more of a contrast to St Moritz. There is an intriguing double-decker cablecar up from Samnaun Plan and two fun routes home at the end of the day – the longest is the Duty Free-Run from Palinkopf down to Dorf with the Smugglers Inn as a raucous après ski stop. There is another lively hut at the bottom of home run red 60 too – The Alprausch down in Laret by Samnaun Compatsch. There’s ample backbowl skiing up on Alp Trida, loads of great accessible blacks further over on the Ischgl side and ski touring over towards Serfaus in Tirol.

Lenzerheide is closer to Chur but here you can keep warm in the sun all day. This requires planning and a detailed study of the piste map!  The 155km of runs sit between forests and the town’s central feature, the Heidsee frozen lake. Lenzerheide is scattered out on east and west slopes. The 2,865m Rothorn towers to your left and looks down on the FIS Men’s World Cup piste on the Heimberg section. We spotted Anje Pärson and Julia Mancuso putting in some nippy pre-Xmas practice runs at Parpan. The west side up to Piz Scalottas at 2,323m has the benefit of the morning sun whilst the east slopes up to the Rothorn trap the afternoon rays. So to get the best from the resort, ski clockwise from Lenzerheide starting from the Val Sporz lift and finishing back at the Postbus station. Scalottas and the Staetzerhorn offer cruising pistes, zig zagging along their flanks and forests before a traditional lunch of Pizokels or Capuns at the splendid La Tischa (www.berghotelsartons.ch).

Lenzerheide has held two FIS World Cup races before and it will hold this season’s closing Ski World Cup Finals from 6th – 20th March 2011. This is no ‘Mickey Mouse’ resort (see www.lenzerheide.com). Roger Federer from Basle holidayed here every year as a kid and has built his own mega holiday home overlooking the Heidsee. The villages of Churwalden, Parpan and Valbella lower down the road to Chur add to the soul of the area, which isn’t super big or always perfectly linked but just a lot more friendly and authentic than St Moritz. The downsides are cured by the free ski bus circulating the 15 minutes between all the base stations.

The much-talked about link with neighbouring Arosa has just been voted down by the locals but Lenzerheide and all of Graubünden’s lesser lights will still be the finds of this season.

Visit now before the millions of British ‘skiing sheep’ from France follow each other here.