A restored Victorian bank should prove an investment for the future of art in the region. Kathryn Armstrong talks the people at the helm of ArtsBank

It’s a glorious day in Saltburn. A shockingly good day, especially experienced from the unexpectedly breeze-free roof terrace of the newly-opened ArtsBank gallery in Saltburn-by-the-Sea.

The 360-degree view of the Victorian seaside town is fascinating, taking in rural, industrial, urban and coastal vistas. We’re absorbing it all leaning against newly-installed metal railings which were blacksmith-commissioned as something of the icing on the cake for this impressive building.

Its incarnation as ArtsBank, a maze of rooms creating small galleries and art spaces celebrates the building’s full use for the first time since it was built in the 1860s.

It is a spectacular building in itself, a timber-framed structure, craftsmen-made, built with no expense spared when Saltburn was a sturdy Quaker town.

There are sweeping staircases and a jumble of rooms, each showcasing the work of local artists in many forms and styles.

Vast corner bay windows let light flood in on this sunburst of a day, one room in particular startlingly bright as the sun shines on bold glass sculptures, thrusting sparkling rays all around the walls.

It is fitting that the building has been brought back to life. Its completion came at the end of the Victorian building boom and for many years only the first couple of floors were ever utilised. Few people made the journey to the roof to take in this spectacular view and the rooms never became the servant’s quarters they were intended to be.

Now though this decked balcony will serve as its own living gallery. Summer nights and visitors (granted, only a couple at a time), will be able to sit down with a glass of wine and watch the tides turn and the sun set.

For the delighted men behind the project, Bryan Goodall and Paul Ingram, it seems the venue is already proving itself as an attraction on many levels.

Figures speak for themselves. Since opening its doors on April 1, some well over 10,000 people have passed through. Among them everyone from the serious art collector judging work by artists like Len Tabner and photographer Ian McDonald to the casual visitor casting an eye over the carousel of greeting cards.

Perhaps the best numbers being noted at this former bank are the till-ringing ones. Around £20,000 taken in the first week and £10,000 the week following.

There are plenty of people willing and able to search out and snap up their own favourite pieces of art in these most democratic of surroundings.

It is still early days. Very early, but nevertheless the thrill of seeing it all happen – the building project undertaken in less than six months – is real and on-going.

Sitting on bright green sofas in the sun-bathed ‘office’ that has only justified its name in the previous 48 hours, Bryan and Paul reflect not so much on what’s happened now ArtsBank is up and running, but the potential for what comes next.

Every day more and more artists contact them to see if they can exhibit. There are already more than 90 on the books and, more significantly, on the expansive walls of this inviting building. This is not a gallery with white space. At all. A few miles down the road offering the biggest contrast of all is Mima in Middlesbrough. Don’t get Bryan started on that one. Well actually, do.

“We don’t want to be part of that elitist bubble that is the art world”, agree Paul and Bryan. In fact they would really like to run Mima, encourage people to visit it and fill it with work from its storage space that is owned by the town and its people.

“I go to Mima to reinforce what I don’t want ArtsBank to be like”, says Bryan.

“What we have here is a dynamic project that is gathering pace.“

Is there an element of ‘giving back’ with the project? Bryan, 61, is a millionaire businessman as the boss of the Hambleton Group of companies and was recently approached to take part in the Secret Millionaire programme. He ultimately declined because he was, by his own admission, ‘too shy’.

His businesses include Vectis, the phenomenally successful toy auction site. He plans to use this web-driven aspect for ArtsBank providing a unique online gallery
to attract a global audience for its North-east artists.

Recognising that the nature of the artist is solitary, ArtsBank is already creating its own buzzy community and that aspect is hugely pleasing to Paul and Bryan.

“It is a business and I am an entrepreneur, a risk-taker, someone who is prepared to tackle projects that might be judged risky. I am a do-er. Paul is as well.

“This is not a conventional business”, Bryan says of the £600,000 development which is set up as a Community Interest Company.

“It is not driven by profit but I am driven by success and profit is part of that success”, he concedes.

“We have gone in with a burning conviction that we can do this and go to hell with the rest”, adds Paul.

“Credible artists with a North-east connection come to us knowing that this is where their work needs to be shown”, insists Paul, an East-Cleveland-born actor, film-maker and music journalist. 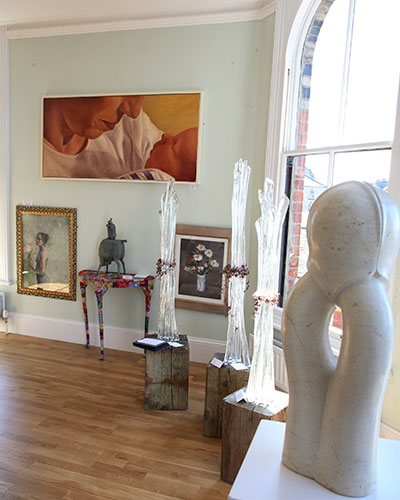 “We want ArtsBank to be known on a national basis. We are not part of the art establishment but we will flirt with the art establishment. First and foremost we are about putting North-east artists on the map and we will do whatever we need to do in order to achieve that.

“We didn’t think we would find the depth of talent that we have. I am convinced that in a year’s time people in London will be talking about us and the quality of work we show.

“We want Saltburn to be associated with the arts in the same way Hay on Wye is with literature”, admits Paul.

“These are not amateur painters doing watercolours on the cliff on a Sunday afternoon”, insists Bryan.

A measure of the reach of the gallery, and this dynamic duo running it, is the collaboration on a BBC documentary alongside Middlesbrough-born artist Mackenzie Thorpe.

The artist, famous for his romantic depiction of the harsh life of industrial Teesside will be following the closure of the Corus steelworks with former workers. He will spend a year on the project creating art which reflects the demise of the industry with the people affected. ArtsBank will be showcasing the work at the end of the project and working with the film-makers.

The end of steelworking at Corus is also marked in a dramatic exhibition in the ArtsBank cellar space which chronicles the industry through photography, sculpture and other media. It is bold and thought-provoking and without doubt a pull for the local community.

The venue will also host live music, theatre and film and become a cultural hub for the town. Musicians and film-makers will be given a local platform for their work, with regular performances and screenings. A free-of-charge mini-cinema will show each day short films of local interest, together with ArtsBank’s own artist-profile movies, again made in-house.

The gallery is to feature on the series of Great Railways Journeys with Michael Portillo. He is exploring Saltburn’s unique train station – just opposite ArtsBank, which somewhat undemocratically had a separate first class station building for holidaymakers who stepped off the train straight into the purpose-built Zetland Hotel. The film crew will be using the gallery and its building renovation to chart the changing time and fortunes of Saltburn.

In the longer term, for the future of ArtsBank, it is expected that profit will be generated by the ability of ArtsBank to produce limited edition prints of the work of its artists.

A case in point is the archive of photographer Robin Dale. His iconic portraits of working class street life are gaining recognition and Paul hopes to be able to reach a wider audience by making limited edition works at a new state-of-the-art studio on Teesside.

“He has the most important photographic archive on Teesside”, says Paul. We will be able to take that and release limited editions of new work, say in batches of ten in high quality limited editions, making them accessible to people.“

Multiply this approach by the number of artists with ArtsBank and the potential on all levels is obvious says Paul.

“There is an audience for quality work- we are getting enquiries from those who are happy to pay £40,000 for Len Tabner works and at the other end of the scale have sold plenty of prints of photographic images of regional landscapes at around £100.

“A thousand pounds is not affordable for lots of people but £60 to £80 is a good price point to get people buying art”, says Paul.

It feels good says Bryan who sums up the success of ArtsBank so far, “swamped with positive wonderfulness”!