When Christian and Carolyn Van Outersterp quit their ‘alpha’ life to buy a woodland and launch an eco-camping business some people thought they were mad. Turned out they were in fact completely in tune with the times as Luxe discovered. 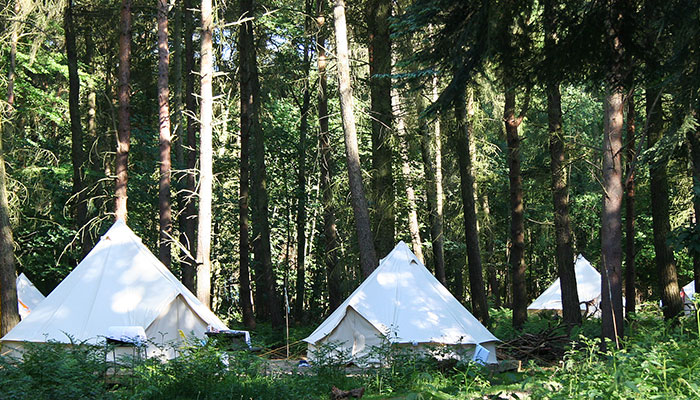 The idea of the building a stylish, tented camp in rural North Yorkshire doesn’t really sounds that silly in 2010. Luxury, vintage-style tents, woodburners, four-posters and roll-top baths under canvas belong firmly in the ‘glamping’ directory.

Posh camping, getting back to nature and living an ethically-sensitive life with some comfort thrown in are part of the back-to-nature vibe. And the people who do it aren’t seen as kooky or even all that radical.

But rewind some five years and Christian and Carolyn Van Outersterp’s dream of creating their very own rural idyll, an eco-chic business that would nurture rather than corrode their busy family life and allow them to live in their beloved North Yorkshire seemed an eccentric whim.

Before they arrived in the countryside, they were living the classic ‘alpha life’, “a friend’s description, not mine”, laughs Carolyn.

They owned CVO fires, a North East-based business making uber-stylish and expensive gas fires, which they sold to the rich and famous. They also owned a glamorous showroom and restaurant bar in central London which displayed and sold the pieces. They had acclaim in the design world as well as a string of awards, including a much coveted Prince of Wales medal.

“We apparently had it all and yet we felt increasingly frustrated, we both craved a more satisfying and less stressful way of life”, admits Carolyn. The old adage “be careful what you wish for” springs to mind, and events took on a momentum of their own for the couple and children Galatea, Midori, Alto and Angel.

“Long before the credit crunch started to hit home, the market for luxury goods began to dry up. To add to our problems our designs were being widely copied in China and knocked out at silly prices, completely de-valuing the brand. After years of struggle we finally acknowledged the impossibility of the situation, and were forced to take CVO into receivership. We were left jobless and absolutely penniless, with four young kids to support”, she says.

They were left with two options: either to up-sticks and move back to the city where we might be able to find work – or else try to build a new life for ourselves in the country.

“The thing that clinched it for us was the kids, the reason we had moved to North Yorkshire here in the first place was so that they could attend a nearby Steiner school. We had become more and more impressed with the education they were receiving and the progress they were all making. Each of them in their own way was blossoming – we just couldn’t let that go and we’re forever indebted to the school for supporting us through our tough times and allowing our children to continue with their education”, says Caroline.

She admits that when CVO crashed, it felt as if they were teetering on the edge of a precipice, desperate to follow their eco-dream – but without much of a clue how to make it happen.

“We’re huge optimists and both believed that if you wanted something enough, and worked hard enough, the impossible was always within reach. Luckily we found an acquaintance who believed in what we were doing enough to put in some seed capital – and then we were off.”

But where do you begin to buy a woodland?

“It took us nearly two years, during which time we scraped along on benefits and any work we could get. We were clear from the start that we wanted the site to be in the woods; so the first job was finding a suitable bit of woodland for sale. You’d think that would be easy… well, if wasn’t. We looked everywhere: checking with estate agents, local land agents, looking on the internet … hopeless. Eventually – when we were really starting to give up hope – we made the decision that we would have to rent. But even that wasn’t straightforward. Most of the woodland around here is used for raising pheasants, and the last thing landlords want is a bunch of campers tramping through”, says Caroline.

They were filled with joy at finding their perfect site – that would become Jollydays – one that ticked all their boxes and it was only a couple of miles from where they lived!

George, the fantastic landlord was not only agreeable, but enthusiastic and very supportive, but of course there were the planners and the local council to satisfy.

“We needed planning permission, and then found that we also needed permission from the Environmental Agency. At one point we found ourselves dealing with the Environmental Officer, the Countryside Officer, the Highways Officer, applying for a site licence, and commissioning a fire report – all at the same time! As it was, when planning was finally granted, it came with 15 conditions attached – some which were fairly straightforward, while others were extremely onerous. The problem was there was absolutely no precedent for what we wanted to do – this was completely new ground, a tent with ensuite facilities was a baffling new concept!”

An important part of their vision was complete sustainability, with on-site energy being provided by wind and solar power. However, this proved impractical, as it would have seriously compromised the woodland setting. 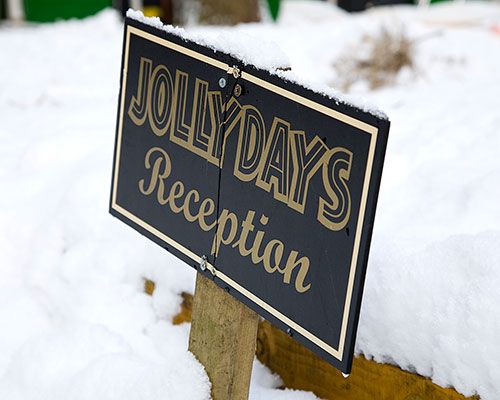 On a tight budget compromise was inevitable and they decided it was better to get the project off the ground “imperfectly” than wait around for years hoping to find the perfect solution.

They brought in mains electricity – although they are proud to say that even now total energy usage is less than would be needed to power a domestic electric oven.

Financing the business also created huge difficulties. “A small investment from our “angel investor” had got us through planning and the acquisition of the site. Now we needed the serious money. Then, just as we were ready to apply to the bank for a loan, the world turned upside down! When planning permission was finally granted, Lehman Brothers had gone down, and it now wasn’t a question of going to the bank for a loan. It was more a question of would there still be any banks left to borrow from? As it was, those banks that were still left standing were hanging onto their money, and not lending to anyone at any price – particularly if they already had a high profile failure to their name!”

Meanwhile, time was running out. They had a strict schedule to maintain in order to open for the season, and get the income they desperately needed to live on.

“In the end, it came down to … do we abandon our dream – probably forever – or do we just go for it anyway? It was no contest, because if we gave up, we would literally have nothing, our backs were very firmly against the wall “, says Carolyn.

They remained as optimistic as ever, knowing they had an awesome business plan that they’d been working on for well over a year.

“What followed next was a crazy round of phone calls and meetings, trying everyone and anyone we thought might even be remotely interested. It was a story of constant setbacks with hope rising and then falling again as yet another bank dropped out. It was the scariest of times, but we constanly reminded ourselves “if you can dream it, you can create it, however impossible it seems at the time”, she remembers.

So they gritted their teeth and decided to carry on as if the finance was in place. The website was up and running, contractors appointed and they began taking deposits, which were squirreled away in case it all fell apart – “at least we would be able to give customers their money back”.

“Finally, sheer bloody persistence, and a refusal to admit defeat paid off. We managed to get that rare – some said, mythical – beast, a government-backed loan. But it was a desperately close-run thing.”

Reality struck on realising they now had to build a whole village with full facilities for water, waste-treatment, electricity and roads for access – and instead of having five months to do it; less than 6 weeks!

With a superhuman effort and a budget overspend of 50% they made the deadline. Torrential rain hampered efforts for weeks, but an hour before the guests began to arrive the sun came out and they had a blistering week – it felt like a Hollywood ending.

“Of course it wasn’t an ending, but the beginning, of our first crazy, none stop season – we barely drew breath”, says Carolyn.

One advantage of being so fraught with the build was that they didn’t have time to fret about the customer’s reaction, but in those quiet moments before people began to arrive – the panic set in.

What the hell were we doing? What if customers didn’t “get it” or worse, hated it? How would we cope with over demanding, arrogant or just plain obnoxious customers? What if we weren’t upto the job we’d taken on? Some of their first thoughts.

“We needn’t have worried, Jollydays attracted and continues to attract a delightful variety of customers, bringing a great attitude and sense of fun with them, they’re generally eager to muck in. For me, the most rewarding part of the whole experience has been meeting such a wide array of people.

“They really do come in all shapes, sizes, colours and political persuasions – but it’s not the differences I notice any more, it’s the similarities.

Being stripped away from their usual surroundings and placed in front of a campfire changes people, or rather allows them to be more authentically themselves. In their more authentic state people just seem to be more accepting and tolerant, consequently we’ve had all sorts of strange and unexpected friendships grow. This is where the true magic of Jollydays lies, the experience fosters a sense of camaraderie and community and that’s truely heartwarming.”

Carolyn believes that the back-to-nature approach of Jollydays is just what the doctor ordered for children fed a daily diet of stimulation – be it from school or electronic entertainment.

“The woodland has a way of weaving its magic on even the most disconnected of little souls. So often today kids are subjected to a huge level of overstimulation and a bewildering array of choices (and my pet theory is choices = stress!).

“We have created within them an expectation of being constantly entertained, and when they’re not being entertained they’re bored.

“So how different it is when they arrive at Jollydays, go looking for the “entertainment complex” and find a tyre swing and a gaggle of other kids. When it’s working sweetly (and most of the time it is) it’s straight out of Enid Blyton, smiling healthy faces, lashings of dens and imaginative games of all kinds. Of course when it’s not quite so sweet, there’s a danger of it tipping into Lord of the Flies – but that’s another story”, she laughs. So are the Van Outersterps the epitome of the middle class downshifting dream? A walking cliché? “I don’t mind that one little bit”, says Carolyn.

“We work tremendously hard, rarely getting a day off and that’s forced our kids to become self-reliant (a good thing, I think!) as our lives are still completely consumed by the camp. But there’s something about having a big fat dream and then daring to go for it – and then watching the dream come to life and begin to impact so positively on other lives. We wanted a greater sense of satisfaction in our lives – and by George, we got it.”