Sage is a favourite venue for Mary Chapin Carpenter so the banks of the Tyne proved a comforting, familiar and fitting place to kick off her latest tour last night, (Monday 7 May). 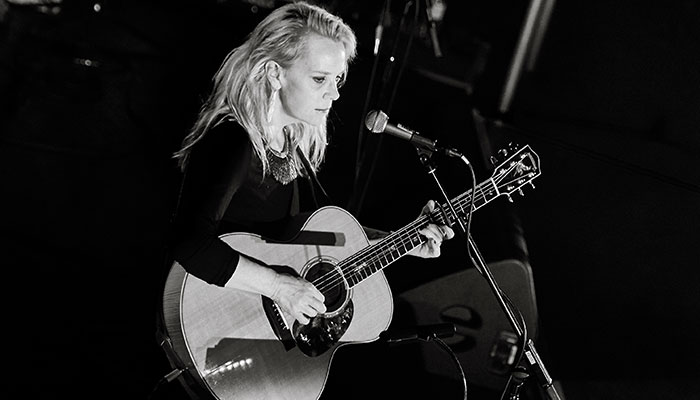 Admittedly a bit wrong-footed by the unfamiliarity of sunshine and waterside warmth, the genial Mary brought a reflective tone to a tour which celebrates her newest album, ‘Sometimes Just the Sky’.

Pleasingly for fans of the singer-songwriter, the album marks a landmark 30 years of her work; so songs are familiar favourites, given a re-brand as it were  – and then some.

A bluesy honkytonk piano revs up the cheeky,  ‘I Feel Lucky’. ‘He Thinks He’ll Keep Her’, reminds us in the starkest terms that here’s a woman who was giving voice to inequality before it was headline news to do so.

We are in the presence of a musician who has made such a mark on the songwriting world with meaningful firebrand and feminist lyrics over those 30 years.

Today it seems that she is reflecting on them with a touch of resignation and life-lived wisdom. Of realising that as much as a lyric about a ‘typing pool’ is a mystery today, it’s actually fine to keep things as they were.

She says that the title of the new collection of songs ‘Sometimes Just the Sky’ came from reading an interview with Patti Smith.  “

“She said that you don’t have to look far or wide, and it doesn’t have to be complicated or expensive or madness in order to find things to soothe you in life, or to be happy about. Sometimes just the sky makes everything fall into perspective.”

So Chapin Carpenter comes to us from a good place as we hear impeccable versions of the protest song ‘Stones in the Road’, the wistful and wise ‘This Shirt’,  heartfelt, ‘The Hard Way’ and challenging  “Why Walk When You Can Fly’. The clarity of Chapin Carpenter’s voice is unrivalled, her presence like meting an old friend; always delicious to dip into on a live stage.