Check out our May/June fish course with Terry Laybourne… 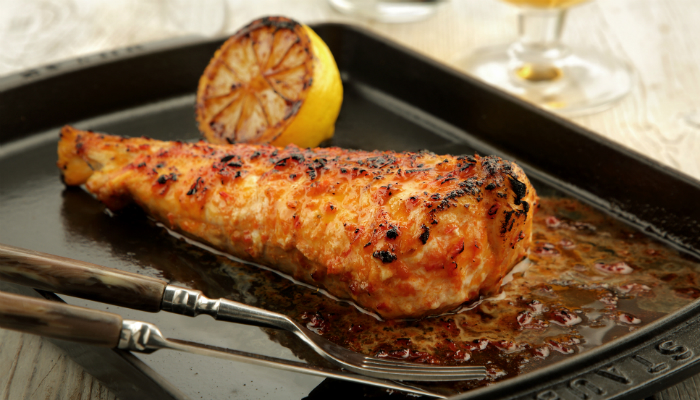 Monkfish is often referred to as the ugly sister of the seas, with its huge, gaping mouth and mottled skin. However, it truly deserves its highly prized status at the fishmonger’s. Its bright white flesh is sweet and lobster-like in density. Full and firm, monkfish holds its shape when cooked. We sell it in tails, making it easy to cook straight from the counter.

The meaty nature of the monkfish means it holds up well to the bold piri piri flavours. The perfect blend of seafood and spice.

Coming up to BBQ weather, this recipe also works well on the grill outdoors on a nice summer’s day. Lovely with a glass of crisp sauvignon blanc.

Pre heat the oven to 180°C.
Allow the fish to come up to room temperature for 20 minutes then season well with sea salt.
Heat a large frying pan, add the olive oil, when it’s very hot add the monkfish and allow it to cook for 3 minutes on either side.
Transfer the pan to the oven and roast for 15 minutes or until the core temperature is 56°C.
To make the sauce; put all ingredients into a blender and run until smooth.
Remove the monkfish from the oven and allow to rest for 2/3 minutes.
Transfer the fish to a serving plate, prise the flesh away from either side of the backbone and spoon the sauce over then return to the oven for one minute to warm through.
Enjoy with a fresh herb salad and some small potatoes roasted with garlic and rosemary.