BOB ARORA: AT THE WHEEL 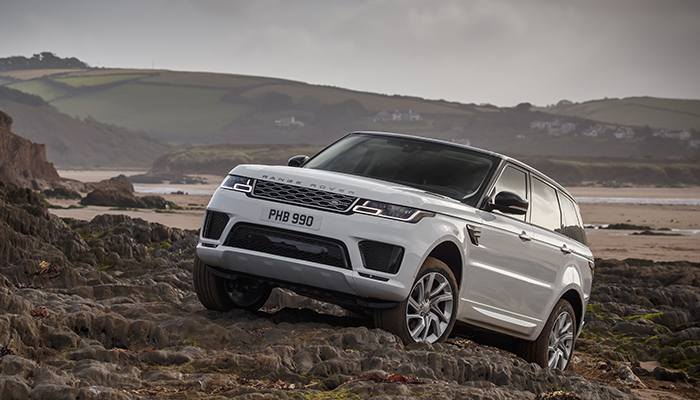 The Sport was originally launched in 2004; this boxy square SUV became a sales hit for Land Rover. Updated in 2013 with an altogether new, cooler and classy look, it has become the vehicle everyone wants. They’re everywhere. Land Rover and waiting lists are eternal bedfellows.

Range Rover’s latest Sport model just screams quality. Let’s start with the interior. With lashings of leather and wood, it looks very expensive and it’s also a great place to spend a lot of time.

The twin tone leather not only makes the interior much lighter, but it also looks very stylish. The car’s exterior has been updated with new matrix led headlights and new alloy wheels which help give the car a fresh new look.

The twin screen has been carried over from the Velar; the top screen controls the sat nav, phone, radio and media. The navigation is touch screen and one downside with this is fingerprints all over the screen, so it never stays clean for long. Land Rover’s connect pro system gives you live traffic updates, it also provides 4G along with Wi-Fi hotspots for you and your passengers. The bottom screen controls the seat heating and the terrain control. There are very few buttons as most things are controlled by the infotainment system; the only conventional dial control is the ventilation system and these have a solid feel to them. 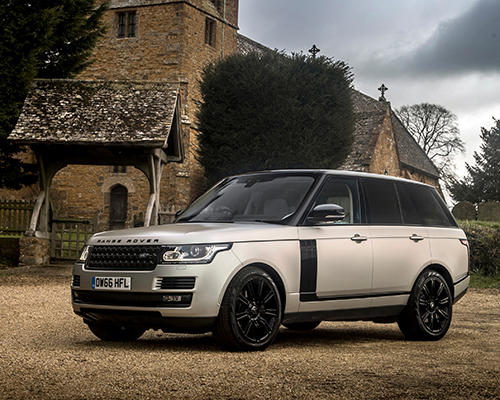 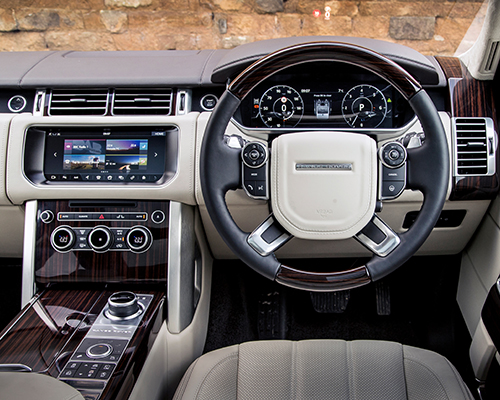 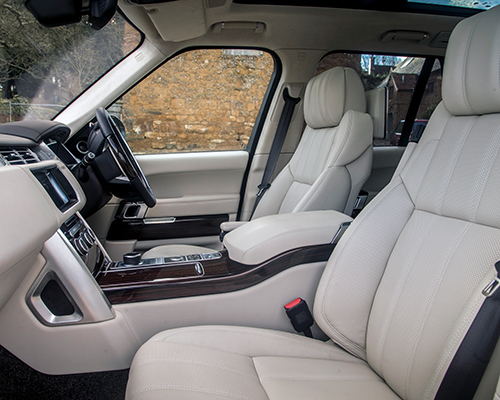 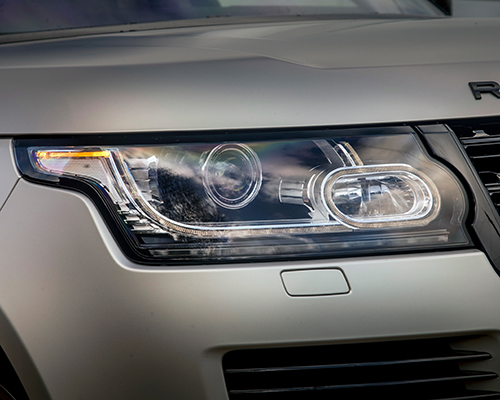 The car’s instrument binnacle is a 12.3” display which provides phone, media and sat nav information. As it’s so clear and great quality I wouldn’t personally opt for the head-up display. The entry level HSE comes with leather seats and the 16 way adjustable heated seats with memory function. Massaging seats are also available as an £820 option; great for long distance driving and a worthy investment. There are lashings of aluminium trim pieces and the mood lighting helps give the cabin a very warm glow.

The range-topping Autobiography gets even softer leather and more wood veneer throughout the cabin along with 22-way adjustable seats with built-in ventilation for hot sunny days. Ventilated seats are also an option for rear passengers as well as being able to recline a few degrees to help you stretch out, however doing this will sacrifice a bit of boot space.

A seven seat option can be ordered for an extra £1,590 and I’d say they are only suitable for young children. If you want a proper seven seater you might be better buying either a Discovery or the Volvo XC90. The Sport has plenty of storage space in its door pockets, the all-important cup holders are in the centre console and the rear cup holders are hidden in the rear arm rest. Two large glove boxes are ideal for keeping the interior clutter free.

The boot space in the Sport isn’t as good as its competitors and it holds 489 litres whilst the Porsche Cayenne holds 618 litres and the BMW X6 holds 580 litres. With the seats down the load space increases to 1,761 litres and a ski hatch is an optional extra.

All Sports, apart from the 2lt diesel, come with air suspension; the smallest engine isn’t the most powerful in the range. It still gets the car to 62mph in 7.2 seconds and its trump card is the 44mpg economy which is good for an SUV. The 3lt diesel will be the best seller in the range but anyone looking for more power should either go for the 4.4lt V8 diesel or the 5lt 550bhp petrol SVR, that is if you don’t mind the eye-watering fuel economy. Another interesting new model in the range is the hybrid which would be my choice; it’s fitted with a 2lt petrol engine that produces 300bhp. When you factor in the electric motors this figure jumps up to 404bhp. It gets to 60mph in 6.2 seconds and on a full charge it’ll do 31 miles on electric power alone. The battery can be fully charged at home in around seven hours.

Despite the car’s size, the Sport is a surprisingly easy car to drive. This is partly due to its commanding view of the road. Front and rear parking sensors are standard across the range; even confident parkers might want to consider opting for the Park Pack as it adds a 360 degree camera which helps making parking easier, at £470 it’s a worthwhile option to hopefully avoid damaging alloys. Another expensive option is the Drive Pro Pack which is priced at £2,145. This gives you active cruise control; it matches the car’s speed ahead and it returns to normal cruising speed once the road ahead clears. A blind spot warning system is also fitted with this pack.

The suspension is much firmer in the Sport compared to the Range Rover but it suffers from much less body roll in corners. The new aluminium body structure helps make the Sport lighter and that helps improve fuel economy and performance. As with all other Land Rover vehicles, the Sport beats its competitors hands down off road. They can wade in water and the terrain response would get most drivers out of trouble. The Sport is a great all-rounder and I’m sure Land Rover will have to work round the clock to keep up with demand for this impressiver model.

As I said earlier, the hybrid would be my pick of the range, I really didn’t think the Sport could be improved but after spending a few days in the car I didn’t want to give the keys back!