A band, a best friend's promise and big music memories they'll never forget. This fun-loving, emotional journey set against a musical backdrop of Take That tunes, really does shine from start to finish.

‘The Band’ and everything they represent. A big 90s boyband transform the lives of five teenage girls with big dreams. Sure, The Band and their music forms the basis of the show, but beneath the surface, it’s as much about the bond as it is ‘The Band’. How five 16-year-old girls in 1992 form a friendship – and a remarkable bond – through their love of ‘The Band’. Twenty-five years on, after all going their separate ways, four of middle-aged women reunite to try once more to fulfil their musical dreams once more.

Against a musical backdrop of Take That songs, The Band tells the beautiful story familiar for anyone who grew up with a boyband – and how those songs became the soundtrack to their lives. 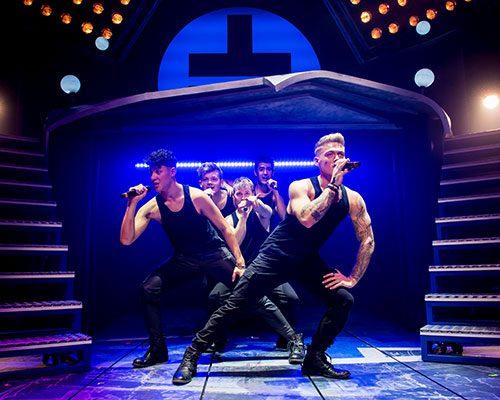 A special mention goes to boyband members: A.J Bentley, Curtis T Johns, Sario Solomon, Nick Carsberg and North East talent, Yazdan Qafouri (from Great Ayton, North Yorkshire). BBC’s talent show, Let It Shine is responsible for bringing The Band together – and boy did they do good. There are moments in the show when you feel like you’ve been whisked away to a real Take That show. The costumes, the dance moves, the cheesy smiles – the boys have it all!

Much of the show is told through the eyes of Rachel – a superfan whose whole life has been shaped by The Band. Young Rachel is played by Faye Christall, while Rachel Lumberg plays adult Rachel. The hilarious Alison Fitzjohn stars as adult Claire, with Sarah Kate Howard as her younger self. The young and confident Heather is played by Katy Clayton, who grows into a strong woman in Emily Joyce. The fourth girl in the gang is played by both Lauren Jacobs (young Zoe) and Jayne McKenna (adult Zoe). The fifth friend (Debbie) from the girls’ teenage years is played by Rachelle Diedricks, who is picking up her first professional credit with The Band – and we have to say, her voice is something special. Martin Miller plays Jeff (Rachel’s partner in later life) – a warm, witty and lovable character from start to finish. 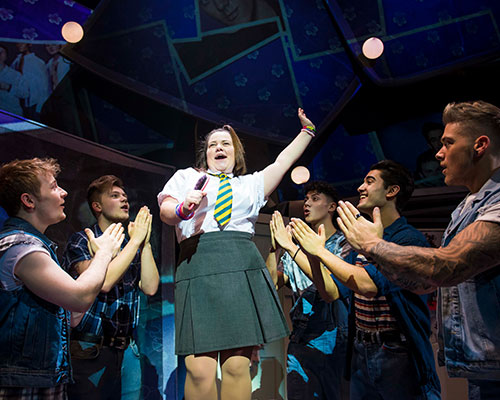 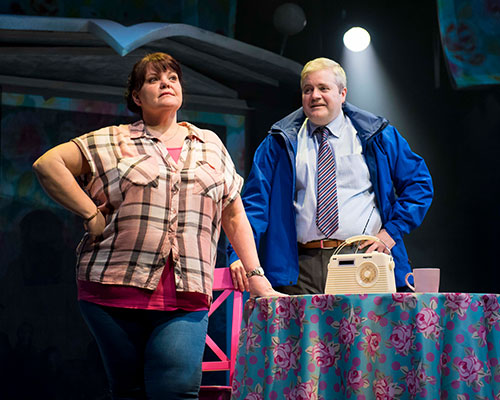 You’re getting a big, bold and colourful theatre production – but with a throwback Take That concert thrown in for good measure. Don’t expect to stay in your seats; you’ll be up on your feet throwing shapes in no time! What is really great about this show is, not only the music, but the heartwarming story line. It’s a feel-good production but with plenty of emotion and funny moments throughout. You can really connect with the characters – going on a journey from their teenage years, to the big reunion. The girls are great – their personalities shine through from the outset, but their quirks really show when they meet for the first time in 25 years later on in the show. Expect a whole host of those ‘remember when’ moments we all share with old friends – with a few mischievous  moments and mishaps throughout. The Band hold the show together – with their talent, their stage presence and their portrayal of a time of pop perfection.

This show is full of fun. Whether you’re  a tier one or tier two Take That fan, you’ll love this show. It might bring back fond memories of the early days, it might remind you of times spent as a child, or it might just get your toe-tapping away to some of Take That’s greatest ever hits. Girls night out – date night – family fun – the theatre is packed out with groups ready to let their hair down and sing along to the soundtrack that shaped our lives.

See The Band at Newcastle’s Theatre Royal now until Saturday 14th April 2018. Get your tickets online.