THE NED: A SAFE BET FOR A CITY STAY

From poolside rooftop views to a jaw-dropping basement bar, The Ned is a cool city stop-off in the capital. Kathryn Armstrong checked in...

In towns across the nation, local banks are being closed down and reincarnated as coffee shops or ubiquitous charity shops.

In the heart of the City of London when Midland Bank closed, it emerged as the coolest club in town. Having said that, its starting point is a staggeringly grand design by Sir Edwin Lutyens, rather than a 70s-era branch office in a shopping precinct.

Lutyens is The Ned in question who gives his name to the City hotel that is the latest noteworthy addition to the Soho House & Co collection.

The breathtaking building is in the heart of the City’s financial district, where until the early 2000s it served as the Midland Bank’s flagship.

In 2012 Nick Jones, founder of Soho House, saw it, loved it and took it on as one heck of a project. And here we are.

Big project indeed. The scale of the place is vast. It spans a good chunk of its address – namely, Poultry, with the Bank tube station opposite its entrance.

Jones’s talks of the notion of The Ned reviving this hotel-sparse business district of the City in much the same way his collaborator Andrew Zobler of Sydell Group did with The NoMad in New York’s once neglected, now vibrant Madison Square North district.

So is it reason to take a visit?

Well if you like a place that makes a statement and leaves an impression, yes.

The building is vast, grand and dazzling. The main entrance takes you not to a reception desk but into an atrium with eating places in every direction – an almighty food court behind swathes of walnut panels, (once the bank’s counters), plush velvets, verdite columns and vaulted ceilings.

If you’re a fan of architecture and fine detail, the place will offer you a treasure hunt under one roof with quirky details and fascinating insight. Those columns for example – 92 African verdite-covered columns – span the main banking hall of The Ned. Each pillar is encased in hundreds of carefully assembled fragments – like a jigsaw puzzle – as the dark green rock was hard to come by in such huge quantities. 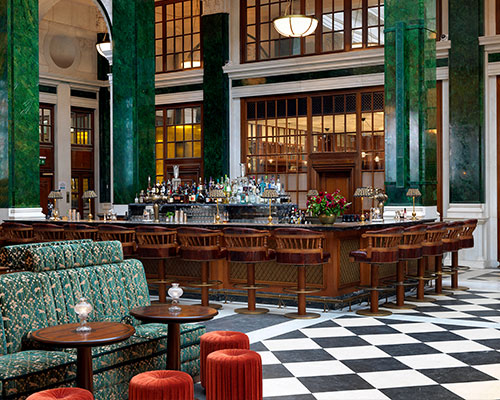 Then there’s the vault bar. Once the formidable entrance to a multi-room bank vault, with deposits of more than £335 million, it is now a cosy club space for Ned’s Club members and hotel guests.

The Ned’s vault door is a must-see for movie buffs. The 25-tonne door was made by Chatwood Safe Company – one of only

two ever made – and was used as inspiration for the vault in the 1964 James Bond film, Goldfinger.

To be honest you don’t really need to leave the building to enjoy different sights and sounds. We stayed there to go to a concert at London Jazz Festival – the Barbican is a five-minute walk – so the hotel offers up

a different base from the more london-central hotels with new places to explore – Tate Modern is an easy walk over the Millennium Bridge.

However, if you’re staying at the hotel it makes sense to make the most of the members’ bars which include the rooftop bar and restaurant. This is just the perfect spot for watching a City sunset. The Shard is to your left, St Paul’s Cathedral and the capital’s vista straight ahead. We were blessed by a ravishing late summer sunset which had to be savored lounging on poolside chairs with fizz in hand.

Ned’s Club Spa has a decent-sized pool and clubby-style lounge area. Chill out in sauna, steam room, traditional Moroccan hammam or head for one of eight Cowshed treatment rooms. You’ll find a barbershop and nail bar down there too, as well as a Cowshed Shop.

If you’re a fan of Cowshed products you’ll be in heaven in your hotel room – a line up of a dozen full-size products from shampoo to exfoliators and shower gels. Perfect.

Architect Lutyens was a man of the Arts & Crafts movement and this is evident in the style of the bedrooms with a nod to early 1920s glamour in soft velvets in muted colours, vintage touches like Lloyd Loom bedside tables, mirrored cabinets and dark wood furniture.

Bathrooms are tiled and tasteful; all black and white and shiny chrome with a real sense of the Art Deco era (meets Cowshed).

A stay means dining at one of the eight restaurants within the banking hall.

From the Robata grill we were impressed by black cod with a perky tarragon miso and Waygu sirloin laced with yuzu mirin.

Saturday lunchtime we dined at the rooftop terrace, heaters and blankets making it cosy. and views to satisfy any appetite.

Yes, this place is definitely a safe bet for a memorable stay.

RHS Chelsea Flower Show
Be dazzled by colourful flowers, innovative garden designs and amazing horticultural exhibits at this prestigious flower show. And find out how else to soak up the atmosphere around Chelsea. 22-26 May.
rhs.org.uk

Art Night
Discover contemporary art and performances for free in iconic and hidden south London spaces for one night only. 7 July.
artnight.london

Frozen (not that one!)
Catch Suranne Jones in this award-winning psychological thriller. She plays a mother attempting to understand how and why her daughter disappeared on the way to her grandmother’s house. Theatre Royal, Haymarket. Until 5 May.
trh.co.uk

Boys & Beards
Celebrate Gilbert and George’s 50 years of collaboration in White Cube Bermondsey’s bold exhibition.
Famous for their uncompromising artistic and social statements, Gilbert and George draw inspiration from half a century of living in London’s East End. The Beard Pictures is a series of images depicting the pair with surreal and symbolic beards or explore walls of almost 4,000 slogans printed in the artists’ trademark black and red typeface.
gilbertandgeorge.co.uk

Frida Kahlo at the V&A
This exhibition is dedicated to the incredible collection of personal artefacts and clothing belonging to iconic Mexican, Frida Kahlo. Expect some exceptional dresses and envy-inducing possessions.
vam.ac.uk/exhibitions/frida-kahlos-wardrobe

See a movie under the stars
London’s outdoor cinema season usually runs from late spring until the autumn, with more screens popping up every summer. Among your choices are Movies on the River, the Rooftop Film Club in urban locations across town, Pop-Up
Screens and Luna Cinema, present evening screenings in pretty parks and squares.
rooftopfilmclub.com

All Too Human: Bacon, Freud and a Century of Painting Life
Showcasing around 100 works by some of the most celebrated modern British artists, including Lucian Freud and Francis Bacon alongside rarely seen work from their contemporaries including Frank Auerbach and Paula Rego.
Tate Britain, Millbank, until 27 August 2018.
tate.org.uk

Travel to London Kings Cross from the North East was provided by Grand Central Rail.