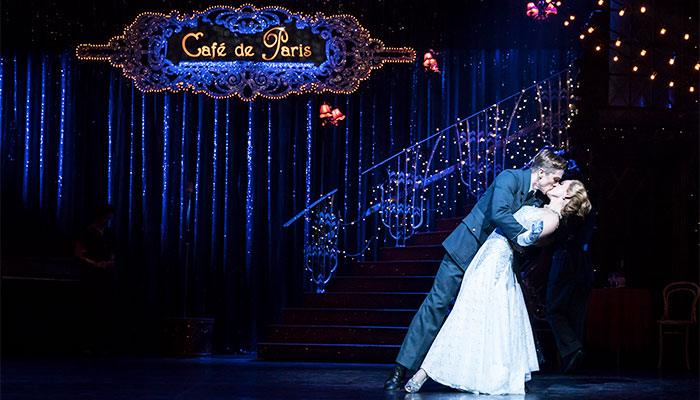 You may think you know the fairytale Cinderella story, but this one has a darker twist than any Disney version. In Matthew Bourne’s hands, the ballet finds itself in the 1940s in a nervy and dangerous wartime London at the height of the Blitz.

Pathe news reels are foreboding, fearful and graphic and create a ‘live for the moment’ abandon amongst the gathered dancers.

Bourne was in part inspired by the darkness of Prokofiev’s score and by his love of 1940s classic films such as Waterloo Bridge and Brief Encounter (Cinders’ happy ending sees her whisked away on a steam train leaving the stage).

Bourne’s New Adventures company dancers are at turns witty, engaging and sexy. We have a cruel stepmother in the lascivious form of the delicious Madelaine Brennan and a charmingly agile and charismatic Angel in Liam Mower.

Cinderella is the sweet, innocent but nevertheless spirited Ashley Shaw who has everyone on her side as she encounters her dashing pilot Harry, played by Andrew Monaghan, then loses her sparkling shoe in the chaos of the blitz.

Snide and spiteful step-sisters and brothers give poor Cinders a hard time but are made to appear silly, vain and posturing, particularly in a scene where they visit her in hospital.

The unexpected twist of the story. It’s not the Cinderella you expect; instead you have a far darker and more nuanced story which references true tales of the Blitz as its background (such as the horrors of the Café de Paris bombing).

It is at times graphic – a depiction of ECT therapy for example, but at turns as deliciously glamorous as you would hope from such a well-love fairytale, especially when our Cinderella sparkles in triumph. It goes without saying that performances are perfect.

Bourne devotees of course, but also anyone with a love for the classic romance of 1940s black and white movies, this brings them to life with a lavish and unique twist.