ON THE RED CARPET: STING & STARS

Luxe saw the stars arrive as the red carpet was rolled out at Northern Stage's gala performance of The Last Ship in aid of the Graham Wylie Foundation.

Luxe joined Sting and his showbiz friends of the North East on the red carpet this week (Tuesday 21 March 2018) at the Northern Stage‘s gala performance of The Last Ship.

The glitzy evening saw many familiar faces and celebs from far and wide come together to raise a glass, see the production and show their support for a leading local charity.

The gala, bringing together a galaxy of stars and famous faces, was in aid of one of the Graham Wylie Foundation. The event kicked off with a glamorous red carpet arrival, followed by a performance of The Last Ship – a new production inspired by Sting’s 1991 album, ‘The Soul Cages’ as well as his own childhood experiences.

The Last Ship brings Sting back home – telling the heart-warming tale of a community amid the demise of the shipbuilding industry in Wallsend, with the closure of the town’s shipyard. This personal, political and passionate new musical is an epic account of a family, a community and a great act of defiance. With original music and lyrics by Sting, The Last Ship also features a few of his best-loved songs Island of Souls, All This Time and When We Dance. This show tells the proud story of when the last ship sails… 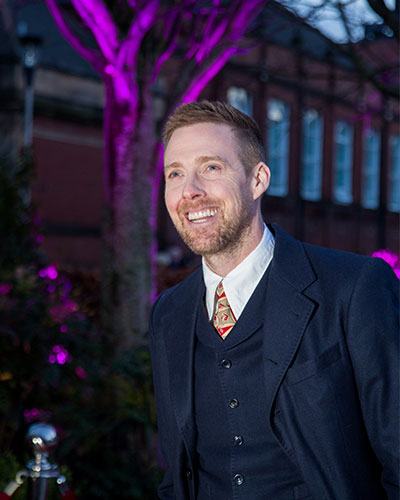 Discussing his return home and his moving musical based on Tyneside life, Sting says:

“The Last Ship tells the story of a community that I was brought up in. It’s a love story, a story of social history – but it has a surprise ending.”

But what made the multiple Grammy Award winner put pen to paper and tell the tale of the last ship that sailed?

“I’m ideally suited to do this because I’m a songwriter,” he says.

Sting at the gala performance

Sting at the gala performance

“And this is where I was born, so I can tell a story that hasn’t been told before – about the yards and the people,” he adds.

After a run in New York and Chicago, it was time to bring the ship home. And after its opening UK shows in Newcastle, the tour will take to the stages of Glasgow, Birmingham, Liverpool, Northampton, Cardiff, Edinburgh, York, Leeds, Salford, Nottingham and Dublin.

“The ship is still floating and I’m really happy about it.”

“We go to Liverpool next month. We play mainly the northern industrial cities, who will remember what it’s like to have that industry and identity taken away from them.

“Then we go back to London and we’ve been invited back to New York the following year. The ship is still floating and I’m really happy about it.”

On the production, his involvement and his childhood, Sting says: “The story is set in Wallsend, which is where I was born and raised. It’s about the shipyard there. It’s a play about the importance of community, the importance of work and what happens to a community when work is threatened.”

“I’ve been thinking about it for a long time because it’s where I was brought up,” he says

When asked how it was received in New York, Sting says: “They received it really well. It’s just a difficult subject to sell – it’s about out of work shipyard workers, that’s not really a very attractive subject, until you get in the theatre, then you’re highly entertained.

“In many ways it was an environment that inspired me, even though I wanted to leave. It was a kind of a surreal industrial environment I was brought up in,” he adds.

“In the nineties I started to think about it as an inspiration for songwriting. In the last seven years, the idea of a theatrical production came to fruition. We started on Broadway, which is the opposite way of how it’s normally done, but I’ve never been one for going the right way about things.”

So why now? Is this a project that has been in the pipeline for a long time?

“You’re never finished with any artistic project,” he says.

“I would regard this as a large part of whatever legacy I will leave. I’m very, very proud.

“Tonight’s performance is on behalf of the Graham Wylie Foundation. The money is going to Nordoff Robbins, which is musical therapy for children. So we’re happy to do that – a lot of posh people coming to see the show tonight and paying a fortune. I’m cabaret actually at the after party.”

“I’m immensely proud of being a Geordie, of where I’m from – it made me who I am and gave me the engine of my ambition.”

On Wednesday (22 March 2018), Sting officially opened a Nordoff Robbins music therapy centre for children in Jesmond. The centre, at the former matron’s lodge at Newcastle’s Fleming Hospital, has been funded by the Graham Wylie Foundation and will be run by the UK’s leading music therapy charity Nordoff Robbins, to support children and young people from across the region.

Ricky Wilson at the launch of the music therapy centre

The Wallsend-born star was joined at the ceremony by Kaiser Chiefs frontman Ricky Wilson, who, earlier in the year, broke ground on the new centre as building work began. The centre will feature a room named after the band, who have been at the forefront of fundraising for the Graham Wylie Foundation.

“We’ve looked around and it’s going to be great. I’ve never had a room named after me before. Of course, I name all my rooms in my house after me, but this one is official,” he laughs.

“It’s great to be involved in something that might change someone’s life.”

“My dad is from the North East. He’s from Seaham Harbour, so I’ve got it in my blood… racing through me.

“You get a lot of stuff in London, but the world’s not getting any bigger – it’s getting smaller, and there is life outside the big city.

“It’s great to be involved in something that might change someone’s life.”

Sting has very much returned home this spring; with the launch of his moving musical, the opening of a music therapy centre, his charity involvements and the bringing together of our North East talent.