BRIAN BLESSED: STARS IN HIS EYES

Brian Blessed is the man with arguably the most recognisable voice in Britain – whether your reference point is Shakespeare, Cats the musical or Grampy Rabbit in Peppa Pig.

At 81, he’s been in space-training with NASA, and simply refuses to subscribe to the notion of ageing. He’s coming to talk to audiences in the North East soon and gives Kathryn Armstrong a taster of what’s to come.

Pleasingly the Brian Blessed who answers the phone offers up the boom of a greeting that you’d hoped for as you dialled. A rich, gratifyingly warm and rich tone which you know comes with a twinkling eye. Never mind Saturday night reality television – this is what you call The Voice.

Within moments you’re in familiar territory as his luscious language, lively vocabulary and nuanced tone welcomes you in to conversation.

Be glad, people. Blessed is bringing the voice to theatres in the region this year – and what stories he has to tell.

An hour in his company leaves you enlivened, and your preconceptions about what an 81-year-old is – well, they shoot to outer space. Which is where he’s planning to go himself. Space might well be his final frontier. He is confident that he will get the chance to orbit.

But that’s just another feat to add to an awesome list of life achievements.

His life is “fifty per cent acting, fifty per cent going on adventures.” He is the oldest man to have reached the North Pole. He has climbed  Everest three times, missing the summit on one occasion because he stopped to rescue someone.

He’s camped and climbed with wolves in Mongolia (he fed them Mars Bars), gone hunting for yeti and escaped a plane crash in Venezuela. Death doesn’t scare this man.

“I don’t get scared of anything because for me, death doesn’t exist. 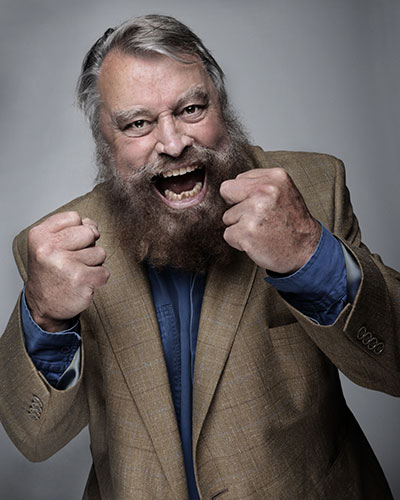 “The most dangerous thing is NOT to have an adventure. We all have our Everests, even if they’re in our garden shed.”

Blessed is speaking from his own ‘shed ‘, an office in his garden which is also home to all the animals he’s rescued. Conservation is a passion he shares with his wife, Hildegarde, and together they have helped as many as 3,000 animals in the grounds of their Surrey home  –  mostly domestic animals: cats and dogs and goats and donkeys.

They, and myriad other creatures form the subject matter of his latest book The Panther in my Kitchen. It begs the question – really? And yes, “it was a rescue panther.” In the kitchen – my dad was staying with me.

“It was magical because when I was seven Dad had taken me to see The Jungle Book at the cinema. It’s the best Jungle Book film and has never been equaled. The star was Bagheera and here she was in my kitchen with dad rubbing her belly.”

Blessed is a prolific writer – in fact, it seems, a prolific everything. He appears to approach everything with gusto and much joy. But maintains he is also a quiet, solitary person too.

That boom of a voice has been with him forever: “I’ve never known my voice break”, he says.

“I had an adult voice when I was a kid, always a big voice.”

It was a voice born in Yorkshire, the mining town of of Mexborough. His dad was a miner with a love of Shakespeare, ‘Dad could quote the whole of Hamlet’ – and the community was one with a love of the world of opera.

As a 14-year-old, Blessed was forced to leave school to learn the trade of a plasterer after his father was injured and unable to work.

But his teachers who has spotted the young boy’s aptitude for drama stayed with him, teaching him at night and encouraging him in the local theatre guild.

“Four or five of my teachers would have made the stars in the theatre”, he says.

“They would take us to Sheffield to see stars like Olivier, Gielgud. They made a huge difference to my life. They inspired me to think the unthinkable.”

Blessed father knew he could ‘bloody act’ but even when he got a scholarship for Bristol Old Vic drama school he was dubious about whether his son would make drama his profession.

But he had the drive to do it and he wasn’t alone. Around this time, Blessed would meet Patrick Stewart on a drama course. They became friends and have shared glittering theatrical lives ever since.

“I see Patrick now and he will say ‘when are you going to relax”’, says Blessed with a guffaw.

He hopes, having done 800 hours space training, that he will one day realise his dream of going into space.

“Training included the experience of being a centrifuge bigger than Wembley.”

This love of space, “we are all children of stardust”, comes from a childhood excitement of the dawn of space travel.

“Since I was a child the biggest love of my life has been space and I completed space training in 2006 with NASA on Reunion Island. My dream is to go to Mars.”

Ever an optimist, Blessed offers us the sage words of someone who continues to live a life to the full.

On Brexit; “I am an optimist of the highest order. I am hope. I feel we will make it.”

On women; “I like people but the biggest heroes are women. I’ve learned a lot from men but have mostly learned from women; I like women, their company. I rejoice that they are appearing everywhere –  90 per cent of men bore the crap out of me.”

On being Grampy Rabbit (in Peppa Pig); “Peppa Pig has made £7billion (hasn’t made us a fortune). It’s a huge success in China. Grampy lives in a lighthouse and I take the children on adventures and shout ‘F-O-G’…”

On being quiet; “I am great friends with Kenneth Branagh. We have a father-son relationship in which I am the son. He will says that I am a very quiet person. I value all my time for creating.

“I value peace and meditate twice a day, it give me my energy and helps me re-charge in silence.

On himself – and being called by The Sun a ‘bearded thespian god’, “I look in the mirror in the morning and I look like a yeti, a gorilla – and I love myself!”

Brian Blessed will be in conversation at Yarm’s Princess Alexandra Auditorium on April 12 and Newcastle’s Tyne Theatre & Opera House on September 6.