From lonely swamp life to swooning over a princess, Luxe joins a gang of fairytale misfits in an ogre's quest for happy ever after at the Sunderland Empire. 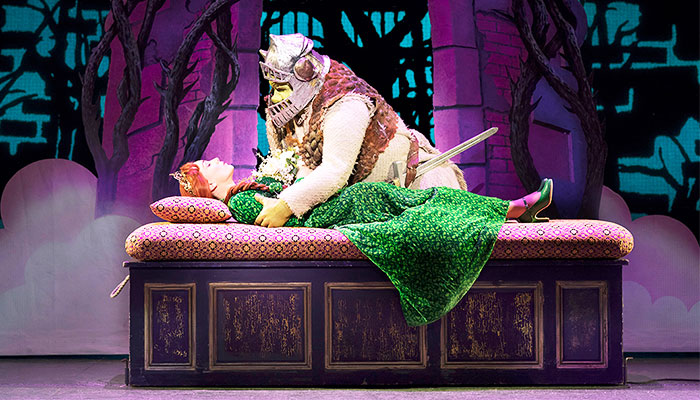 An unusually lovable ogre lives alone in his swamp, but little does he know he’s in the grounds of Lord Farquaad’s Kingdom, Duloc. Lord Farquaad is a small person with a big personality. And after banishing the fairytale characters from his kingdom, all that’s left to do is hunt down a princess to marry, making him King of Duloc. After the mismatched fairytale characters – from Pinocchio to the Three Little Pigs – are banished to Shrek’s swamp, the ogre marches to the home of Lord Farquaad to demand that he welcomes the characters back to their home. Shrek meets a talking donkey along the way – a talking donkey with a lot of sass, may I add. Donkey becomes his new ‘best friend’ and they’re sent on a journey to save Princess Fiona from a dragon-guarded castle. With Donkey working as a distraction, Shrek slips passed the ‘flirtatious’ dragon and rescues Princess Fiona from the castle tower. She’s blown away by the bravery of her ‘knight in shining armour’ only to find out he’s an ogre and not exactly what she has read about in the fairytales. An unexpected relationship blossoms and Donkey finds himself in the middle of this mis-matched love affair. But the plan is for Princess Fiona to marry Lord Farquaad. Will she go through with it after meeting her not-so-handsome ‘knight in shining armour’ and his ‘noble steed’?

Steffan Harri’s plays Shrek – and with a strong theatre background, his big, bold stage presence holds the whole show together as we learn to love his character. His singing voice is great as he effortlessly transforms his strong Scottish accent into lyrics. We love his dry humour and the development from creature to charismatic character. The not-so-big character of Lord Farquaad is played by Samuel Holmes – the star of the show for us. He has us in stitches from start to finish with his arrogant irony, his quick wit and his weird and wonderful ways as he shuffles across the stage in a smug way. The lovely Laura Main (Shelagh Turner in Call The Midwife), plays Princess Fiona – a fiery red head who defies the characteristics of your average princess. She’s funny, she’s ditzy and she’s a real cheeky character. We’re blown away by her tap dancing number and enjoy her chirpy, cheerful presence throughout. Special mention goes to Marcus Ayton as Donkey – now, this is a character with real sass. He’s funny, he’s forward and he’s everyone’s best friend throughout the show. 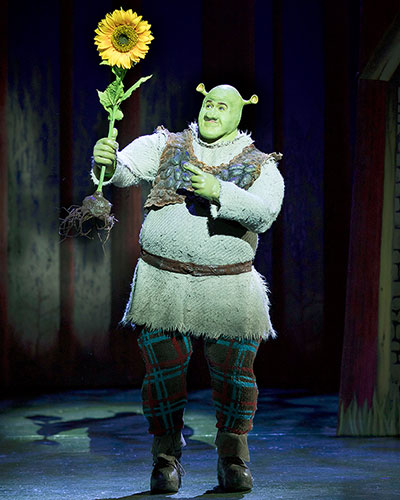 What’s not good about it? Expect one daft donkey, a love-sick dragon, cruel curses and unexpected love stories. This is an upside down fairytale that will have you laughing out loud, toe tapping in your seats and smiling from ear to ear as you watch the tale unfold. Lord Farquaad will have you in stitches – an overly confident character with the sort of sarcastic humour you’d expect to see in the comedy circuit. Donkey is a sassy character to say the least. He’s bold, he’s bonkers and he’s everyones best friend throughout the show. The score is sensational – catchy tunes with hysterical lyrics keep the audience engaged throughout. Shrek and Fiona take on a terrific scene when they’re trying to out-do each other about their tough childhoods. ‘I Think I Got You Beat’ is an absolute cracker – and had us creased from start to finish. We were delighted to see the big ‘I’m A Believer’ finish – a familiar scene from the movie. It closes the show perfectly, as a huge celebration erupts with all characters brought back on stage.

This is one for the whole family for sure. The kids will giggle all the way through and the grown ups will appreciate the quirky characters you meet along the way. A larger-than-life musical telling the tale of a larger-than-life ogre we all know and love.

This beast of a musical is on at the Sunderland Empire from Thursday 1st February until Sunday 11th February 2018. Book your tickets here: atgtickets.com