Luxe turns Valentine's Day on its head at the theatre with the gritty tale of newlyweds, Hedda and Tesman as the world around them falls apart.

An everyday tale of a neurotic woman, a desperate marriage, death and betrayal in a Scandi setting. Not a hint of hygge here. Pretty much the antithesis of Valentine’s Day, but all the more watchable because of it. This is the modern day version of Henrik Ibsen’s famous work, first shown in the late 19th century but remarkably resonant today. This is Patrick Marber’s dazzling National Theatre’s production which brings it bang up to date.

Hedda is played by the highly watchable Lizzy Watts who can turn on charm, distaste and murderous contempt at will. She is one nasty piece of work. Utterly selfish, spoilt and unreasonable. She’s a soap character of today; the one who’s a ‘right bitch’ of a woman who everyone loves to hate.

Her husband, the academic, Tesman, is the man she’s ‘settled’ with. He bores her and leaves her seething when she realises their newly married life will be beset by money woes. Tesman is played by understudy JP Conway who naively goes about his business pleased as punch that Hedda has chosen him. Judge Brack (Adam Best) brings badness and blackmail to Hedda’s life and the arrival of her former lover Lovborg (Richard Pyros) unleashes Hedda’s deadly intent.

It’s a compelling story grippingly told – not least in Hedda’s moments of madness when we hear the songs of Joni Mitchell’s, Jeff Buckley and Nina Simone power from the stage. You have infidelity, lust and pride in the mix – what’s not to love?

Well, it’s a classic with themes relevant to today, so anyone who relishes a great drama. It brings plenty of emotion and leaves you reeling. It makes for a brilliant night at the theatre. You wouldn’t choose Hedda as your Valentine date, but watch this and she’ll make sure you have a memorable one. 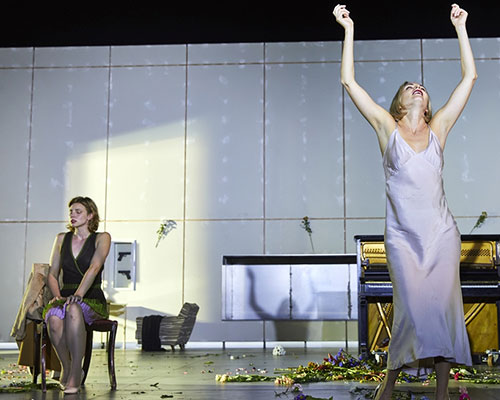