The solitary craft of guitar-making is exacting and precise. Sam McClaren, son of ex Middlesbrough, NUFC and England manager Steve, tells Mike McGeary about the tools of his rare trade. 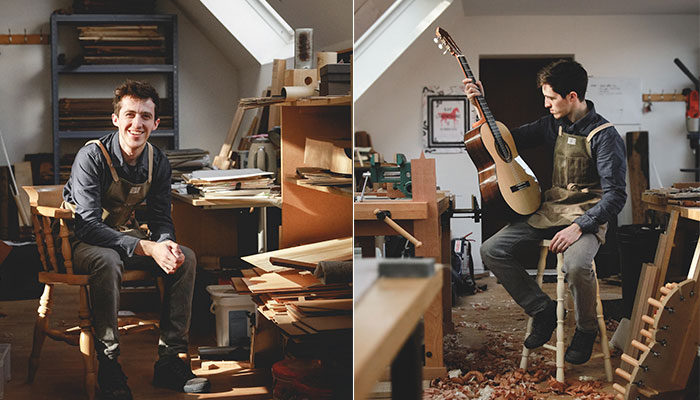 As his neighbours set out on their  dreary commute, Sam McClaren has already been busy in his workshop for an hour, putting the finishing touches to a stunningly beautiful classical guitar that will soon become its new owner’s pride and joy.

At just 25, Sam is carving out a glowing reputation as one of the country’s most talented young luthiers, with a long list of satisfied customers, both amateur and professional.

For the son of former Middlesbrough, Newcastle United and England manager Steve, designing and constructing guitars is clearly a labour of love and his enthusiasm for his vocation is infectious.

“This is my work and it’s my hobby as well,” beams Sam. “Even on my day off I’m thinking about guitars and daydreaming about being back in the workshop.

“This week’s it’s been six o’clock starts because I’m in the final stages of a guitar. I need to come in early so I can give it as many coats of varnish as possible during the day. I love working late in the evening as well because there’s complete silence in here.”

Sam began having classical guitar lessons above a Manchester music shop at the age of eight, while his dad was assistant manager to Sir Alex Ferguson at
Manchester United.

His skills were nurtured at Yarm School after the family relocated to Teesside when Steve became Boro boss, and it was there that he also developed an interest in woodwork. 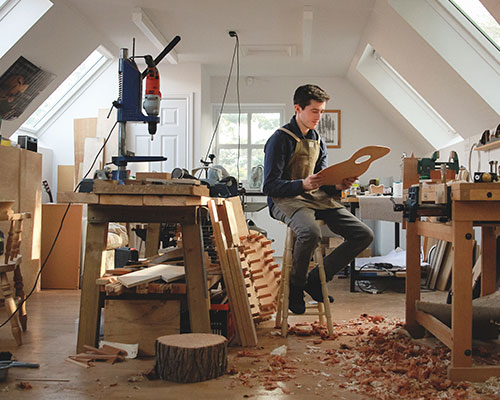 “I started using the wood-turning lathe in the Design Technology department in the senior school and picked up joinery and carving skills,” he says.

“The teachers were a big influence and helped push me towards the craft side rather than academic work, which I was never brilliant at. I got good A-level results but I didn’t enjoy lessons that involved sitting down and writing. That’s not me at all. I was always more hands-on and have to be moving about, on my feet and constantly working – I’m a bit like Dad in that way.”

When his two great passions of music and woodwork dovetailed, it proved to be a major turning point in Sam’s life.

“Whenever I had a free period I’d be on the lathe,” says Sam. “Then one day my teacher showed me a guitar he’d made and another he was working on. I’d been playing for so long that I already knew all the parts and I was fascinated to learn how it was put together.”

After that Sam spent time with leading luthiers and attended courses in Devon and Nottingham that fanned the flames of his new passion. After completing further training, he took the plunge and started up on his own.

His workshop above the garage outside the family home now contains everything he needs to create musical instruments of such precision and quality that they compare favourably with the very best in the world.

There are humidifiers and dehumidifier to maintain the exact conditions his work requires, especially during the delicate gluing process – “If the humidity isn’t within the right range I won’t glue because the joint will crack,” he says.

He also spends much of his time vacuuming, making sure there are no specks of dust that would blemish the painstakingly applied layers of varnish on his instruments.

“Everything you see on the guitar is made by me,” he says. “I even design the rosette detail around the sound hole and the patterns on the veneers. The only thing I buy in is the tuners and the case.

“People sometimes look at my age and assume I won’t know much, but in fact I know more than most. Everything I do on the guitar I do because I’ve learned that it’s the right way to do it. I like people meeting me because then they see that I know what I’m talking about.” 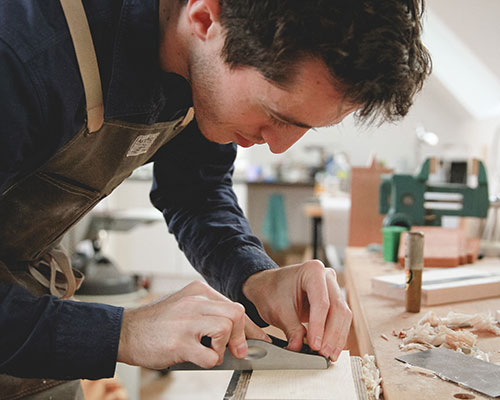 Not surprisingly, these painstakingly handcrafted instruments come with premium prices, starting at around £3,000, with upgrades possible if more expensive woods are chosen.

Each instrument is tailored to the customer’s needs, with the size and body shape designed for comfort and woods carefully selected to produce the required tone.

“A customer might ask for ebony back and sides and that’s when the price increases, but I don’t make any more money on the more expensive woods, I just add on what I paid.”

With such long hours involved, Sam’s chosen path is by no means an easy option, but it is immensely satisfying. And there are other benefits. For a start, his walk to the workshop is far less stressful than the daily journey faced by those commuters.

“When I was living at home it was great to roll out of bed in the morning and into the workshop,” he says. “It’s the perfect space because there’s so much sunlight and air coming through, which I need.

“We were having the garage built and I was looking for my own workshop and couldn’t find anything suitable, but this was ideal.”

Music has always been important in the McClaren household, but most of the family are avid listeners rather than players, if you’ll pardon the football pun.

“Dad has a big collection of blues CDs but I have to choose some good music for him to listen to because he would be a nightmare otherwise!” Sam laughs.

“For his birthday I bought us tickets to see Imelda May at the Sage. I’m not really a fan of chart music, I prefer the weird and wonderful and I listen to lots of singer-songwriter and folk music.

“My parents are just happy if I’m happy and if I’m working hard and trying to do it, I know they’ll try to support me.”

“I was never very good at football, I never really got into it – but I quite like being a little bit different anyway!”