Chloé Laing took a time machine to 1985 and travelled all the way back through three decades of classic Whitney hit’s. 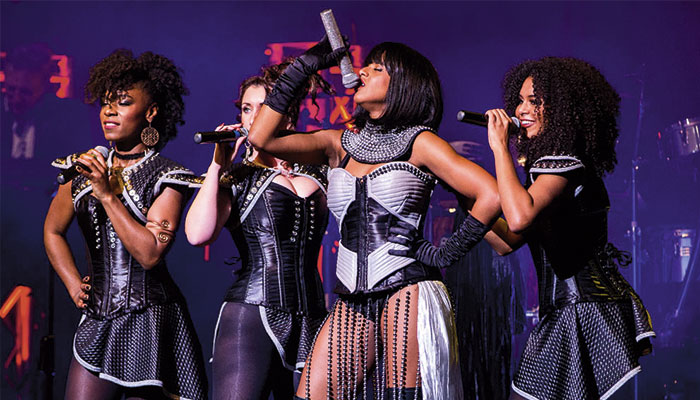 The wonderful Whitney Houston left behind a true legacy with her three decades of hit after hit that have touched all our lives at some moment in time. We went to Sage Gateshead for an evening of celebrating some of the very best songs by the most highly awarded female artist in the world at a powerhouse performance dedicated to the late star. The evening was what could only be described as world class. It’s a truly captivating rollercoaster ride that is packed full of more than enough glitz and glam to do the Queen of the Night absolute justice.

Following in the footsteps of Adele and Leona Lewis, Brit School Champion, Shanice Smith delivers a outstanding and breathtaking performance as Whitney in this award winning production. She is both beautiful on the inside and out, a dazzling personality which shines through as she talks to the audience about Whitney and about the power of love. Shanice wowed with her vocals and endless glowing outfit changes that came with almost every new song. An array of dresses that glitter and stunned the audience almost as much as the power and seamlessness of her voice – which filled the room and earned Shanice two very well deserved standing ovations.

The backing singers where as brilliant and as spine-tingling as Shanice with their gorgeous vocals and sassy on point dance moves. We were wowed by the band who created stunning sounds throughout with drums, guitars, bass, and saxophone solos. The room filled with music that kept the audience on their feet and the fun flowing. A true celebration and one Whitney would of been proud of!

It took us by surprise. We expected a devoted journey through Whitney’s wonderful career but did not foresee the captivation that would follow. The audience was like no other, there was dancing, singing, whooping and cheering from beginning right through even after Shanice left the stage. The combination of stunning outfits, hair and style changes with the brilliant sounds of the full band and the backing singers teamed together to create a truly awe-inspiring performance.

All the bases were covered with One Moment in Time, I Will Always Love You and The Greatest Love to the classic pop tunes like I Wanna Dance with Somebody and I’m Every Woman. Shanice also belted out some of Whitney’s smooth R&B hits like My Love is Your Love and the stunning When You Believe. A set that gives you goosebumps and celebrates the songs so many of us adore all over the world.

Whether you are a Whitney super fan or not, there is something for everyone to thoroughly enjoy here. It’s a standout evening for couples and gangs of girls to all have a sing and dance to.

Check out www.queenofthenight.co for tour date listings up and down the country, with a return up North at Billingham Forum Theatre on 9th February 2018.