Chloé Laing travels to a land far far away to check in to Princess Aurora’s hilarious panto party.

It’s December and that can only mean one thing – it’s panto season! What better way to get into the festive spirit than a trip to see the side-splitting production of Sleeping Beauty at Gateshead Stadium. It’s the group’s first year at the stadium, previously based at the Tyne Theatre and Opera House and they kicked off their new tradition with a bang. They have teamed up with Gateshead Council to put on a show in the stadium’s gym where the performance lights up the room with a whole load of fairytale magic.

It’s Princess Aurora’s (Emily Swan) 25th birthday and you are all cordially invited to her birthday party thrown by her lovely mother Queen Bumble (Christina Dawson) and her devilishly dry humoured father, The King. Can she last the night without succumbing to the curse by evil Fairy Carabosse and stay away from all items that are sharp?

Aurora will need a little helping hand from her friends Numpty Norman, Fairy Merriweather, her true loves kiss Prince Berb and most importantly – the audience! The show is packed full of all your favourite panto treats with plenty of sweets, songs and a host of terrible jokes that will have laughing out loud the whole way through.

The cast are a local Geordies – a pantomime company that will have rolling out of your seats laughing with familiar accents and in-the-know jokes. Writer Maxie Peters, who stars as Lottie Stottie, teams up with Bob Stott (Dottie Stottie) for the dame duties and what a match they make! Together with Brian Lonsdale as Numpty Norman, the trio lead the laughs with plenty of lines that will have the kids giddy with giggles. They keep the spirits high and the gags flow the whole way through.

Have a giggle with guardian Fairy Merriweather (Sarah Challoner) who probably needs a guardian to look after her too. A generous dusting of dopiness and sweet innocence leaves her in a pickle that will have the kids in stitches. Get ready to “boo” at the evil Fairy Carabosse played by Phillippa Wilson, who fills the boots of the brilliant baddy determined to crash the party and send Aurora into a sleep that will last one hundred years.

Stealing the show with his side-splitting Elvis impersonations, The King will crack you up with his one liners and laid-back attitude. The charming Prince Berb (James Hedley) dazzles with his charming voice, seamless songs and save-the-day swoop ins.

You’ll be shouting “he’s behind you” and “oh yes you did” without even realising it. It’s got all the glitz and glam you’d expect at the pantomime, with dazzling costumes, songs to make you snigger, silly names and a much-loved, magical storyline – but what makes it stand out the most is the classic northern charm injected into the production. The North East spin makes it a truly charming performance which we just could not get enough of.

The talent show had us chuckling from start to finish with Prince Berp as Ed Sheeren belting out an original North East song about a night on the Toon and The King rocking the Jailhouse Rock with high energy backing dancers to match the number. 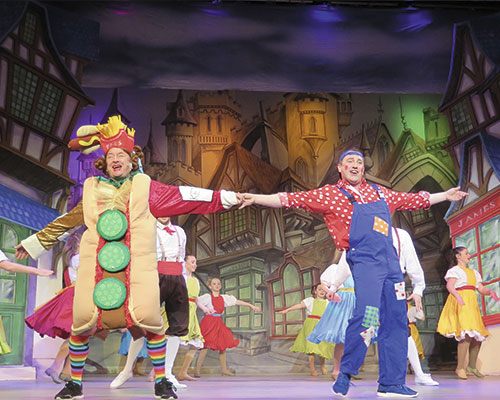 We just couldn’t wait for the infamous Twelve Days of Christmas and it certainly did not disappoint. Balloons popping, cockatoos flying and a three piece bra getting popped in all the incorrect places – it seemed as much a surprise for the audience as the guys on the stage in a truly hilarious sketch.

It doesn’t matter what your age is, you’ll all have a ball at Aurora’s party! A fabulous performance full of laughs for both adults and the little ones. Plenty of sneaky gags to entertain the grown ups and lashings of silly jokes for the kids. Perfect for the whole family, group gatherings or a feel-good festive laugh with your chums.