When it comes to seafood by the seaside, the name Nathan Outlaw is one to make ardent food lovers drool.

His devotees make a pilgrimage to Cornwall where the Michelin-starred chef has three places taking in fine-dining, gastro pub and seafood kitchen.

Paul Johnson and Kelly Hopkins were no different – but their pilgrimage was from the other side of the restaurant pass, for Paul, cooking at Outlaw’s Mariners public house in the swanky, sea-salty and super-chic resort of Rock on the Camel Estuary.

And for Kelly, who has worked in a number of North East restaurants and hotels including Slaley Hall, No 19 at Close House and the Barrasford Arms, it meant managing the Metropole Hotel in Padstow, just across the water from Rock. 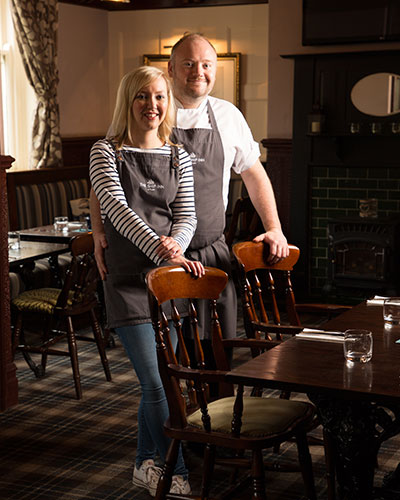 The couple were there for more than three years, with Paul honing his skill in the kitchen as Kelly developed her skills in management.

With the beach on the doorstep this land of serious surf might seem the ultimate place to work – surely in your mind’s eye every shift ends with a dip in the sea or a reach for the wetsuit?

“Well, I had a surfing lesson once as a birthday present,” laughs Paul.

“The weather was terrible – I never tried it again!”

Instead, he concentrated his talents on feeding the hungry folk visiting the Mariners – in what is one of the most exclusive holiday destinations in the UK, often dubbed ‘Kensington-on-Sea’ because of its abundance of wealthy second home-owners.

“The town is crazy busy in the summer – yet it is tiny – you can’t drive through. Gordon Ramsay bought a £4m house there this year – lots of properties are second or third homes. It gets a bit crazy!”

In terms of cooking, the abundance of fresh fish and shellfish was a chef’s dream, but as a traditional pub, it was also all about catering for the meat-lovers with quality steaks and other gastro staples.

What the Outlaw kitchen experience did add by the bucket-and-spadeful was attention to detail and the ultimate appreciation of fine ingredients, says Paul.

“The quality of seafood and fish was amazing. The fishing boats have access to a Nathan Outlaw fridge, so they’d put the best stuff in there – we’d call up and see what was in his fridge that day – he got a licence to be able to buy straight from the boats – amazing mackerel and lobster.

“But as a pub – Sharp’s Brewery is in the village too – we tried to be known for our steaks as much as anything. People go on a foodie pilgrimage to the Outlaw places and they are all different.

“What I gained from working in an Outlaw kitchen was real attention to detail in everything we cooked – from a fish finger sandwich upwards. Things looked simple, but there might be three or four components to everything on the plate.

“The outlook and experience was everything.”

Now, Kelly and Paul have brought their little slice of Cornwall back to a slightly less sunshiny Wylam to recreate some of their Mariners magic.

The couple, who met working at Close House Hotel and Golf Club, hope their gastro pub efforts will put Wylam on the foodie map.

The pub’s name lends itself to subtle hints of their Cornish escapade – clock the jaunty earthenware water jugs and the odd oar about the place.

The Ship is a characterful pub in the heart of Wylam, almost as close to the water as they’ve been used to with its river walks close-by.

Paul has created a neat, tasty-looking menu that will appeal to lovers of creative pub food, which comes with a big local tick too.

Not forgetting to quench your thirst with a taste of their own-beer, Shipwreck, or an Americano made with Barnard Castle’s Langton Coffee.

Kelly says: “We always knew we wanted to come back and get our own place. It feels like a traditional pub, but we want to focus on quality local ingredients and keep it simple.

“It is a big place with a lot of outside space, so we have some exciting plans.”